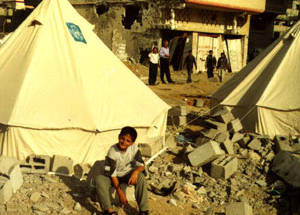 Israel unilaterally withdraws from the Gaza Strip. In January 2006, elections are held for the Palestinian Legislative Council, and Hamas comes to power. The next several years are marked by increasing tensions and violence, including rocket fire from Gaza into Israel, Israeli attacks on Gaza and the abduction of Israeli corporal Gilad Shalit, who will be held captive until 2011.