land blockade on the Gaza Strip 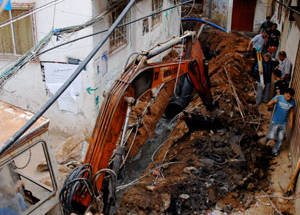 Israel imposes a land blockade on the Gaza Strip. In January 2009, a naval blockade is added. In June 2010, Israel announces a package of measures to ease the blockade by lifting some import restrictions and approving a number of projects funded by international agencies, including UNRWA. However, by 2010 broad unemployment has reached 45.2 per cent, one of the highest rates in the world; by 2013, 80 per cent of the population is dependent on international assistance. The blockade’s remaining restrictions present “the core obstacle” to the economic recovery of the area and its residents, of whom 750,000 receive food assistance from UNRWA.