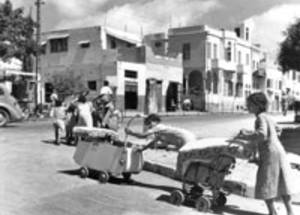 UNRWA is created by General Assembly resolution 302 (IV), with the initial mandate to provide “direct relief and works programmes” to Palestine refugees, in order to “prevent conditions of starvation and distress… and to further conditions of peace and stability”. UNRWA takes over from the United Nations Relief for Palestine Refugees (UNRPR), established in 1948.

In response to developments in the region, the General Assembly repeatedly extends and expands the UNRWA mandate, requiring the Agency to engage in a wide variety of humanitarian, development and protection activities based on the needs of beneficiaries.

General Assembly resolution 614 (VII), in 1952, notes a need for “increased relief expenditures” in the UNRWA budget. In 1955, resolution 916 (X) notes the "serious need of other claimants for relief […] namely, the frontier villagers in Jordan, the non-refugee population of the Gaza Strip, a number of refugees in Egypt, and certain of the Bedouin”. General Assembly resolutions in 1958 and 1959 recommend that the Agency increase programmes relating to education, vocational training and self-support, an emphasis that will become an important blueprint for the Agency.

Following the hostilities of June 1967, in which 300,000 people, including some 120,000 Palestine refugees, are rendered homeless or leave their homes, resolution 2252 (ES-V) asks UNRWA to “continue to provide humanitarian assistance… on an emergency basis, and as a temporary measure, to persons in the area who are currently displaced and in serious need of continued assistance”. In later years, the General Assembly repeatedly restates the Agency’s mandate for those displaced in 1967, and, after the invasion of Lebanon by Israel in 1982, extends it to encompass those displaced by “subsequent hostilities.” In the same year, resolution 37/120 (J) explicitly adds protection to the list of UNRWA responsibilities, urging the Agency to “undertake effective measures to guarantee the safety and security and the legal and human rights of the Palestinian refugees in the occupied territories.”

From 1992 to 2002, UNRWA collaborates with the Office of the UN Special Coordinator for the Middle East Peace Process (UNSCO) and other specialized agencies of the United Nations system to contribute to the development of economic and social stability in the occupied Palestinian territory (oPt). In 1993, after Israel and the Palestine Liberation Organization (PLO) sign the Declaration of Principles on Interim Self-Government Arrangements, UNRWA begins developing its Peace Implementation Programme, which works “to meet Palestinian requests for assistance and priorities” during the interim period; General Assembly resolution 49/35 (1994) notes its “significant success.”