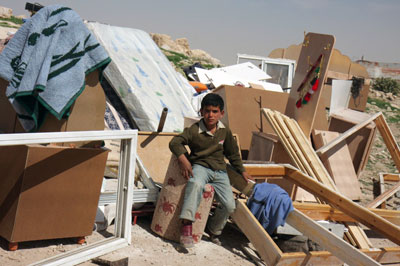 The Israeli practice of demolishing homes, basic infrastructure and sources of livelihoods continues to devastate Palestinian families and communities in East Jerusalem and the 60 per cent of the West Bank controlled by Israel, known as Area C.

Many of the people affected already live in poverty, and demolitions are a leading cause of their ongoing displacement and dispossession in the West Bank.

The impact of home demolitions on children can be particularly devastating. Many children affected by demolitions show signs of post-traumatic stress disorder, depression and anxiety. Their academic achievement often suffers.

Demolitions also lead to a significant deterioration in living conditions. Families and communities face increased poverty and long-term instability, as well as limited access to basic services, such as education, health care, water and sanitation.

In order to build homes in East Jerusalem and Area C, Palestinians must apply for a permit from the Israeli authorities, who control these areas. The vast majority of demolition orders are issued because a home or structure has been built without an Israeli permit.

Building without a permit means that the structure is considered “illegal” by Israeli authorities. Under the Israeli zoning policy, Palestinians can build in just 13 per cent of East Jerusalem and in just 1 per cent of Area C. In both cases these areas are already heavily built up.

Ultimately, the number of permits granted to Palestinians each year falls far below the demand. More than 94 per cent of all Palestinian permit applications have been rejected in recent years.

This means that when a family expands or a community wants to build infrastructure to meet its basic needs, the choice faced is between building without a permit, or not building at all. Many end up building to meet their immediate needs in the hope that they will be able to avoid demolition.

Sadly, the number of people affected by demolition continues to grow. The UN estimates that between 28 and 46 per cent of Palestinian homes could be at risk of demolition, leaving people living under a cloud of anxiety.

The table and graph below shows the number of people displaced and affected by demolitions in the West Bank and East Jerusalem since the start of 2011.

See a further breakdown of these statistics.

Note: Displaced means people whose homes have been demolished. Affected is when a demolition has had an impact in other ways such as on people’s livelihoods or on basic services and utilities.

In 2010, more than 10 per cent of people displaced by demolitions in East Jerusalem and Area C were refugees registered with UNRWA.

UNRWA seeks to protect refugees against infringements of their human rights, such as eviction, displacement, or restriction of movement. UNRWA monitors violations of international law and advocates for the protection of Palestine refugees’ rights. The Agency also provides emergency assistance to victims of house demolitions, evictions, and refugees whose property is damaged as a result of conflict.

Support our demand that Israel meet its obligations under international law

• Immediately cease demolitions of Palestinian-owned homes, schools and infrastructure, which cause displacement and dispossession, until Palestinians have access to a fair and nondiscriminatory planning system. This should include community participation in all levels of the planning process;

• Families that have been forcibly displaced must be allowed to return to their homes in safety and dignity, and be given compensation for any harm they have suffered, including the destruction of land, homes and property.

*About Activestills
The Activestills collective is a group of Israeli and international documentary photographers, who document various topics including life under occupation, the popular joint struggle against the Israeli occupation and colonisation, women’s rights, house demolitions, unrecognised Bedouin villages, forced displacement. For more info: see activestills.org.