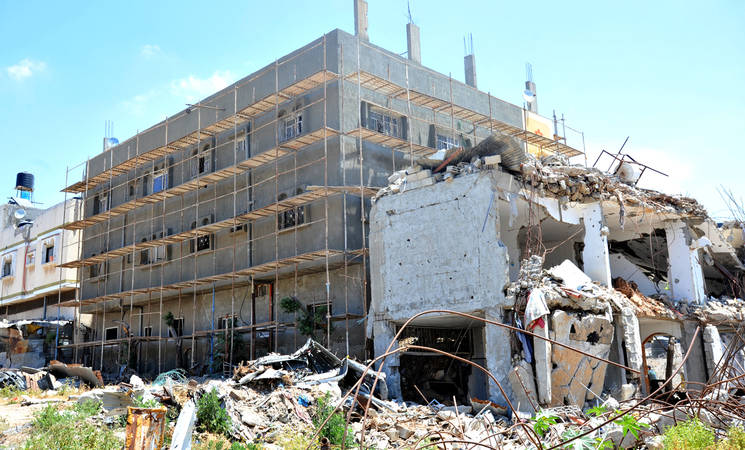 Operational environment: 8-year old children in Gaza have already lived through 3 cycles of armed conflicts and grow up in a place where “rubble lies on top of rubble” as the world does not hold its promises to reconstruct their homes. The devastating effects of repeated armed conflicts add to years of blockade, extreme poverty and shockingly high unemployment rates. With 1.8 million Palestinians “locked in” and denied free access to the rest of the world, the humanitarian impact of the blockade is enormous.

The political situation in Gaza became more tense during the reporting week; a wave of deadly attacks by Islamic State (IS) in Egypt’s northern Sinai near the Gaza border has left dozens of Egyptian soldiers and militants dead, as media reported. On 3 July militants in the Sinai reportedly fired rockets into southern Israel. Israel accused Hamas of having cooperated with IS in the Sinai attacks, as the Haaretz newspaper reported, which Hamas denied.

On 1 July a damaged house in Gaza city partially collapsed and four persons were injured. On 2 July a dispute between two families ended in the throwing of a sound bomb, which resulted in three injuries. A number of Palestinians were also accidentally injured due to celebratory gunfire to mark the Tawjihi high school results.

Regular protests occurred during the reporting week, mostly to rally support for Khader Adnan’s release after ending his 55 day hunger strike in an Israeli prison, or in favour of the Freedom Flotilla III that tried to break the blockade of Gaza but was intercepted by the Israeli navy.

Fariz Husu’s family is one of the first 86 refugee families who, one year after the 2014 conflict started, were cleared this week through the Gaza Reconstruction Mechanism; they will soon receive construction material to rebuild their totally destroyed home.

“It was a happy surprise for me; I am so lucky that my name is included in the first list. I had almost lost hope, I did not expect this,” commented Fariz with a quiet smile on his face.

Since the complete destruction of his house in Shujjaiya, in eastern Gaza city, during the 2014 summer hostilities, the life of the family had completely changed. “Since the conflict, and over the past 12 months, my family has suffered a lot. We have lost our house and our stability, and even my bus which was my only source of income has been destroyed,” said Fariz who worked as bus driver prior to the conflict. “Our area is not the same; people are full of grief and sorrow because of their losses,” the 39-year old father of eight children added.

Standing on the empty lot where his four bed-room house once stood “with a nice view on our garden”, he said: “It is all gone; nothing is left but rubble.”

Shujjaiya in eastern Gaza city was one of the most heavily damaged neighbourhoods in the Gaza Strip during the 50 days of hostilities. When the shelling became “so extensive and random,” as Fariz described it, his family fled to a designated UNRWA emergency shelter in Gaza city. Fariz recounted the memories of their escape:

“First, we were not able to leave the house, we were stuck, all laying on the floor, me and my family together with my sister, her children and her husband. It was so scary and terrifying. We called neighbours and the International Committee of the Red Cross (ICRC), but no one was able to help us evacuate. One day early in the morning we reached a point where we had to run for safety; people were running with us, and the most painful was that we had to leave the ones who fell down behind as there was no time to go back and help them.”

The Husu family left the UNRWA Collective Centre in October 2014 upon receipt of rental subsidy payments through UNRWA and has since then “moved from one rented house to another,” as Fariz explained.

Although he has signed the undertaking with UNRWA to receive cash assistance for the reconstruction of his home, he remains concerned about the future.

“All I wish for is for us to live in peace, to be safe and to not have to suffer from more conflicts. We want a chance to raise our children and see them grow up,” he added.

On 1 July two Israeli tanks and four bulldozers entered approximately 200 meters into Gaza and conducted a clearing operation along the security fence.

On 3 July three rockets were fired from Sinai by Islamic State jihadist group’s affiliate in Egypt and landed in southern Israel without causing casualties.