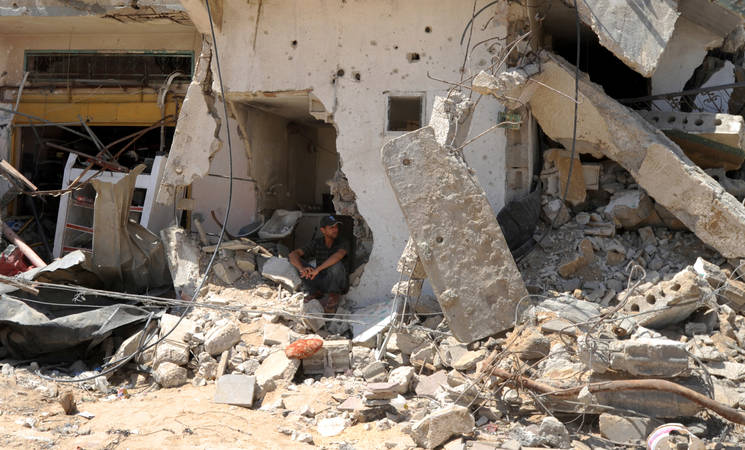 Operational environment:  With the planned but uncertain reshuffle of the Government of National Consensus, the tense situation in Egypt’s Sinai near the southern Gaza border and the seemingly dim prospects for a lifting of the blockade, the political and socio-economic situation in the Strip remains unstable. “In an increasingly unstable Middle-East, neglecting the needs and rights of the people of Gaza is a risk the world should not be taking,” commented UNRWA Commissioner-General Pierre Krähenbühl in a statement on 8 July. A short film by Channel 4 released this week and widely circulated broaches the issue of potential rising radicalisation in Gaza as a consequence of the 2014 conflict, the lack of economic prospect for youth as well as the general ostracism of Gaza by the international community.

Israel is said to launch its first investigation into a senior officer of the Israeli Defence Forces over the 2014 conflict, according to news reports; the officer faces allegations that he ordered the shelling of a health clinic in Shujjaiya, eastern Gaza city, out of retribution for the death of one of his soldiers. The Israeli Military Advocate General also announced the opening of two other criminal investigations over the Gaza conflict, as media report.

During the reporting week several cases of intercommunal violence were reported. On 7 July, a family dispute took place in Khan Younis, southern Gaza. One person was reportedly stabbed to death. On 8 July, a dispute between two families also in Khan Younis allegedly led to an exchange of fire with two fatalities and one seriously injured. On 11 July, a 20-year old Palestinian allegedly attempted to hang himself at Al Bureij camp, reportedly due to an internal family dispute. On 12 July, a 33-year old male Palestinian allegedly committed suicide after setting himself on fire in the Gaza area.

On 7 July a fire broke out in a house in Jabalia, northern Gaza; as a result two children died.

Protests and rallies were held during the reporting week to mark the first anniversary of the 2014 conflict or to demand the release of Palestinian prisoners in Israeli jails.

“I felt my right is preserved”

Co-signing of homes in Rehousing Project

The Musa family moved into their new home in the Khan Younis Re-housing Project a few weeks ago, after years of living in unhealthy and cramped housing conditions. As soon as they were informed by UNRWA about their new housing option, Nabil Mousa as well as Fatheia and Khadra – his two wives – visited the nearest UNRWA Relief and Social Services office to co-sign the undertaking and benefit from the new shelter.

“I immediately accepted the UNRWA policy of co-signing between husbands and wives; I have no problem with that,” recounted Nabil Abu Musa, a Palestine refugee, sitting on the floor of their new light and welcoming four bedroom house with rose-painted walls and black and white floor tiles. “This is an internal family business and I want to make my family happy. And who is my family? My wives and my eight children. We should all enjoy the chance of having a new home together,” he added.

“I felt very proud when they asked for my signature; I felt my right is preserved, and I was of course surprised as well,” commented Fatheia satisfied. “It is good that a woman can feel that she has a right to the house she is living in,” added Khadra.

UNRWA is currently allocating 449 housing units in the Khan Younis Rehousing Project to selected refugee families. As of 14 July, 412 families have signed the undertaking and 324 of them have already moved into their new dwelling unit upon destruction of their old shelter. Thirty-seven families are still expected to sign the undertaking.

The Musa family is very pleased with their new home, which also includes a small, sunny yard. Their previous house was located three metres below street level; in the winter water and sewage from the street entered the one-room dwelling; there were mice and rats, and the walls were torn down. It had no ventilation and “we just never saw the sun,” explained Nabil sadly. UNRWA became aware of the poor conditions the family was living in after Nabil reached out and sought assistance. The Agency then provided the family with rental subsidy payments and for eight years they were moving from one rented house to the other until finally, just with the start of Ramadan, they received the shelter in Khan Younis.

“I feel like a newborn since we have received this house; I want to erase all the memories of the previous years, the grave we had to live in. I feel like I am in heaven now,” Nabil commented with a big smile on his face.

“The life of our children changed as well. Now, they don’t have to feel shy anymore to invite their friends. They can play in the yard, and they can see the sun,” added Fatheia.

Almost half of the caseload of eligible families for the Rehousing Project are Social Safety Net (SSN) Programme cases like Nabil’s family, living in constricted shelters - more than 3 persons living in less than 50m2 - and identified across the Gaza Strip according to UNRWA scoring system that considers social, financial, cultural and technical criteria.  As of 14 July, 197 SSN families have signed the undertaking and 128 of them have already moved into the new shelters. The Khan Younis Rehousing Project is funded by US$ 19.7 million contribution from the United Arab Emirates Red Crescent and covers 600 housing units in total.