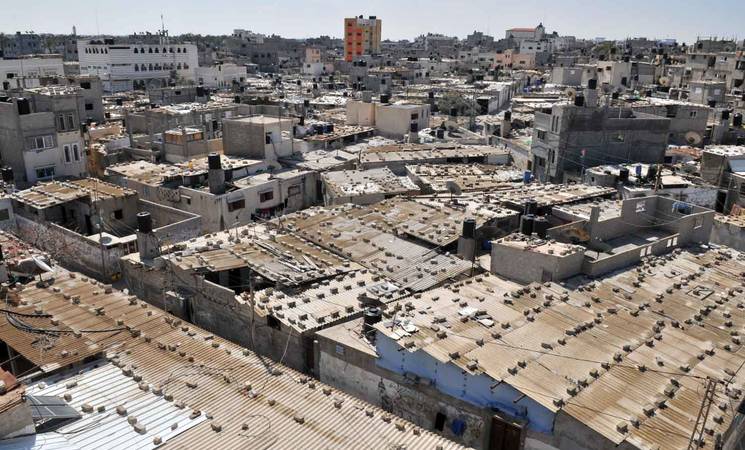 Operational environment: In Gaza, regular electricity and water shortages are part of the daily grind and are one of many difficulties the population has no choice but to cope with. According to the United Nations Office for the Coordination of Humanitarian Affairs (OCHA) in the occupied Palestinian territories (oPt), only 45 per cent of the electricity demand in Gaza is met. Rolling 12 to 16 hour blackouts per day are heavily impacting private businesses, private households or health facilities alike; in addition, due to fuel shortages more than 70 per cent of households are being supplied with piped water for 6-8 hours only every 2 to 4 days. Gaza’s fuel crisis reportedly started with an Israeli airstrike in 2006, targeting the Gaza Power Plant and is reinforced by disputes between Palestinian factions over the funding of fuel, the restricted import of spare parts for water and electricity infrastructure and the fact that over 70 per cent of households do not pay electricity bills due to their economic inability to meet the costs.

During the reporting week several incidents of inter-familial or inter-communal violence were reported. On 14 July, a dispute between two families reportedly led to one death in Nuseirat, central Gaza. On 19 July, a dispute in Gaza city reportedly led to an exchange of fire that killed one woman. Over the past several weeks repeated suicide attempts have also been reported. This week, on 19 July, a 36-year old Palestinian from the Khan Younis area reportedly committed suicide by hanging himself.

A series of car bombings hit the Gaza Strip on 19 July, when five cars were blown up in Gaza city. No injuries were reported. The incident has been widely discussed in the media stating that cars belonging to members of the Hamas movement and Islamic Jihad had been targeted. No group has claimed responsibility, but news outlets suspect the bombings to be the work of Islamic State supporters.

During the week also regular protests by different factions took place in solidarity with Palestinian prisoners in Israeli jails.

Eleven young men between 16 and 22 have gathered around a long wooden table in the UNRWA Camp Improvement Project office in Deir El Balah, central Gaza. They listen carefully to the project team staff who are giving a short introduction on the aim of the project itself and the community participatory approach used for its implementation. The community approach includes focus group meetings, surveys, consultations and online tools to enable camp residents to set priorities how best the living conditions in their camp can be improved.

The young men sitting at the table belong to one of nine focus groups in total to discuss camp improvement priorities. Other groups represent children, female youth, working women, working men, fishermen, people with special needs, elderly men and housewives “It is very important for us to participate in this meeting. UNRWA needs to hear the voice of the community because they know best what their own needs are,” commented one young man who eagerly participated in the group discussions.

After an individual five minutes brainstorming session, the participants engaged in a lively debate about the needs, requirements and priorities for the camp improvement project. Green areas, new health centres, wider streets, larger schools, better water quality and regular electricity provision were all among the urgencies raised by the male youth.

“We need to get rid of the noise. The houses are too close to each other; as youth, we have no chance to relax, think and plan our future,” commented one participant advocating for street expansion. “True, not even the children can play in these narrow streets,” another participant added in support.

A third focus group member argued for awareness-raising sessions to be included in any infrastructural change, “we need to address the basis of the problem and work with the people to avoid the camp from being deteriorated again after it has been improved.”

UNRWA shares the results of the focus group meetings as well as the survey and other outreach tools with community leaders and UNRWA urban planners who will attempt to translate them into financially and technically feasible project components that represent the community consensus. The physical construction of the camp improvement project will begin next year.

The three year US$ 40 million initiative is generously funded by the Programme of the Gulf Cooperation Council for the Reconstruction of Gaza through the Islamic Development Bank.

On 16 July, militants fired one rocket towards Israel from northern Gaza; the rocket exploded in an open area in southern Israel and no injuries or damage was reported. At the same day, Israeli forces fired three missiles reportedly targeting military training sites in northern and central Gaza; in central Gaza one women suffered slight injuries.

US$ 220 million has been pledged in support of UNRWA’s emergency shelter programme, for which a total of US$ 720 million is required. This leaves a current shortfall of US$ 500 million.