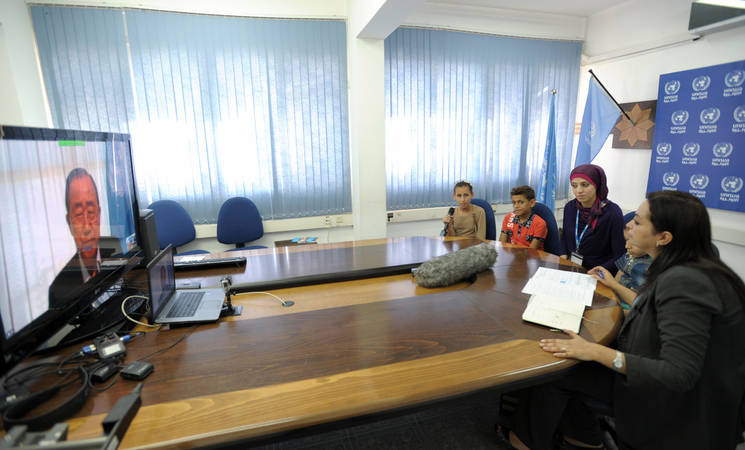 Operational environment: As summer temperatures soar in Gaza, tension and uncertainly also remain high. The potential delay in the start of the school year for Palestine refugee children in the region has contributed to the protests and sit-ins reported this week, including in front of UNRWA installations. These immediate concerns of refugee families in Gaza add to the burden of poverty and unemployment already experienced by too many as a result of the ongoing Israeli-imposed blockade and displacement due to the cycles of violence.

On 6 August, an unexploded ordinance (UXO) detonated in a house in Shabura area. Four people were killed and 50 others sustained injuries. Palestinian workers found a UXO inside a house allegedly targeted during last summer’s conflict. Also during the reporting week, unknown persons allegedly detonated two IEDs in front of a lawyer’s house in Gaza City, with no injuries reported.

During the reporting week, a Palestinian reportedly killed his 35 years old sister in her house in Al Zawaida area. The police are investigating the case.

On 3 August, a 38 year-old male died after he fell from the fourth floor of his house in Jabalia area, in Gaza’s north, allegedly while trying to escape from the Police who had come to arrest him due to financial issues.

During the reporting week, demonstrations were held in solidarity with Palestinian prisoners in Israeli jails or in solidarity with journalists killed during the 2014 summer hostilities. On 8 August, the United Nations Office for the Coordination of Humanitarian Affairs (OCHA) in the occupied Palestinian territory, circulated a Joint UN statement regarding the Israeli law adopted on July 30 allowing the force-feeding of detainees and prisoners on hunger strikes in Israeli prisons. The statement highlighted the law as “a cause for concern to thosewho work to protect the right to health of Palestinians in the occupied Palestinian territory.” The statement was signed by representatives of OCHA, the Office of the High Commissioner for Human Rights and the World Health Organization.

After protests last week regarding the burning of a Palestinian toddler near Nablus in the West Bank on 31 July, the incident continued to make headlines with the death of the child’s severely burned father. The incident had been widely condemned internationally, including  by the United Nations Children’s Fund (UNICEF) or the United Nations Special Coordinator for the Middle East Peace Process, Mr. Nickolay Mladenov.

Healthy living at any age, through the UNRWA “for you grandma” sessions

More than 35 elderly females gathered at the open yard of Al Daraj Women’s Programme Centre (WPC), where they were focused on the instructions and advice of a physiotherapist during an awareness session on healthy life practices.

This session was one of two in the first of a three-day initiative that will involve 50 elderly females from areas east of Gaza City, including Sabra, Tufah, Shujaya and Zaitoun. The initiative called “for you grandma” was a combined coordination of Elderly Programme Officers and UNRWA Community Development Social Workers (CDSW) at the Agency’s Relief and Social Services Programme (RSSP), and was held in coordination with the WPC.

“The aim of this initiative is to make sure that elderly people are involved in activities that guarantee their social participation and integration; our three days’ work will target them from health, psychological and recreational perspectives” commented Wafa Yunis, a Community Development Social Worker at Gaza East RSSP office, who was one of the coordinators of the initiative.

“Elderly women used to come to the WPC on daily basis, even when there were no activities, they came here to meet and talk to each other; it’s an outlet for relief where they share their stories, experiences and the harshness of life,” Wafa added.

Partner organizations are also involved in the initiative, including Baituna association, who provided the physiotherapist session and taught participants exercises to help alleviate back pain many of the women were experiencing.

Um Mohammed, a 52 year old mother of seven from Tufah area, was pleased to participate in the sessions at WPC. “When your children have their own lives, your role becomes a secondary one, therefore, coming to the Women’s Programme Centre is something that keeps me occupied; here I attend awareness sessions, I meet with other women, it’s where I feel that I have something to add,” she said.

“I used to come to the old centre 20 years ago, and I am still adherent; I like to attend the awareness sessions and join the different activities and mostly the recreational trips, where we can sing, and laugh,” Um Mahmoud added.

On 3 August, militants fired two rockets towards Israel. The rockets dropped short and landed in Gaza areas. No injuries or damage were reported. On 4 August, four bulldozers entered approximately 100 metres into Gaza, east of Al Qarara area. The Israeli troops conducted a leveling and excavation operation along the security fence before withdrawing.

On 6 August, militants fired one rocket on 6 August from the middle area towards Israel. The rocket dropped short and landed inside Gaza areas near the eastern security fence. No injuries or damage were reported.

On 7 August, Israeli Forces positioned at the security fence opened fire towards Palestinian areas. A 14-year old Palestinian male was injured. Also on 7 August, Israeli aircraft fired one missile, reportedly targeting a Hamas training site west of Al Bureij Camp. Four injuries were reported. On the same day, militants fired one test rocket from Al Zawaida area towards the sea. Militants also fired one rocket from east of Al Maghazi Camp towards Israel. The rocket landed in an open area north of Kisuffim in Eshkol Regional Council. No injuries were reported.

On 9 August, militants fired one rocket from Al Mughraqah area towards Israel. The rocket dropped short southwest of Gaza City. No injuries were reported.