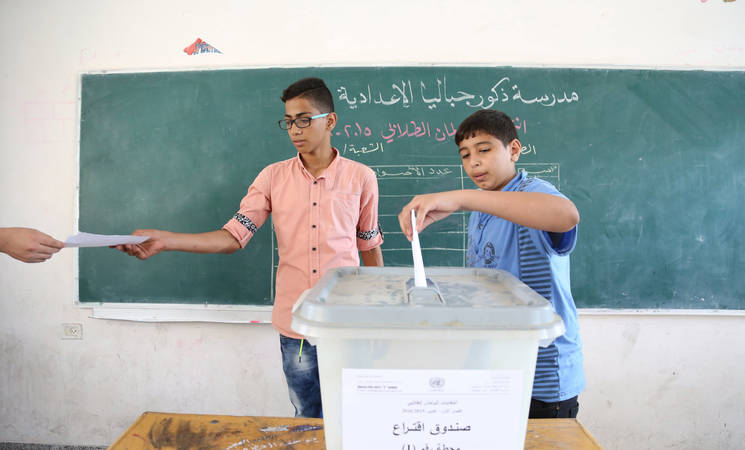 Operational environment:  With the developments over the past days, tension and fear, but also frustration and anger, are running high in the Gaza Strip. More than one year after the last conflict ended, the world has still not kept its promise about rebuilding Gaza and thousands of families continue to live in their damaged homes, with cold winter temperatures and winter’s heavy rain approaching. Gaza still holds the scars from the 2014 conflict. With worryingly high unemployment, poverty and food insecurity rates, the outlook especially for Gaza’s young generation remains bleak. Gaza’s youth is at risk and many seem to have lost their hope in a dignified, stable and secure future.

The violent developments in the West Bank since 1 October have led to demonstrations in the access restricted areas (ARA) near the fence with Israel in Gaza, and resulted in violent clashes with Israeli forces. According to the Office for the Coordination of Humanitarian Affairs (OCHA) in the occupied Palestinian territory (oPt), the developments over the past week present a high potential for further deterioration.

During the reporting week, hundreds of Palestinian civilians gathered in different locations in the Gaza Strip, some in the vicinity of the fence, to demonstrate against the current situation in Gaza and the West Bank. Some protestors reportedly burned tyres and approached the fence between Israel and Gaza and started to throw stones towards Israeli forces observation posts; Israeli forces reportedly responded with gunfire and tear gas.

A total of 11 Palestinians, among them refugees, have reportedly been killed and at least 186 injured. Nine people, including three children were reportedly killed during demonstrations in Gaza and two people – a pregnant woman and a child – were killed when a house collapsed due to the impact of a nearby Israeli strike. Four people were reportedly injured in the latter incident

On 9 October, unknown persons stabbed the leader of Al Sabreen Movement (a dissident from the Islamic Jihad movement) in Shujjaiya in eastern Gaza; he was moderately injured.

Heavy rain was pouring down on Gaza in the morning of 8 October, but this did not deter 336 young female graduates from attending the closing ceremony of the Young Women’s Leadership Programme (YWLP) at the Rashad Al Shawwa Centre in Gaza city.

The YWLP is implemented by the UNRWA Gender Initiative in partnership with Community-Based Organisation (CBOs) across the Gaza Strip. The programme aims at improving the skills of female graduates in management, administration, human rights, English language or interview techniques. Following the training, the graduates have the chance to apply their skills in a three-month practical training in one of the partner organizations of the Gender Initiative.

“The Young Women’s Leadership Programme was comprehensive and included much valuable training. It helps fresh graduates like me to improve our chances in the labour market. Without these skills, we are unable to compete against the thousands of graduates looking for jobs in Gaza,” commented 24-year old Asma Dweik who joined the YWLP to complement her theoretical knowledge with practical experience in communications and life skills.

Due to the Israeli-imposed blockade and severe restrictions on the movement of people and goods, the enclave’s economy is devastated and unable to absorb the thousands of qualified graduates who enter its labour market each year. Gaza suffers from one of the highest unemployment rates world-wide, according to the World Bank. While the average unemployment rate stands currently at 41.6 per cent, the highest rate is recorded among female refugee youth with 71.2 per cent, according to the Palestinian Central Bureau of Statistics. In light of these rates, the outlook for Gaza’s youth is bleak, yet the 336 young female graduates of the YWLP are not giving up.

Asma was one of the organizers of the graduation ceremony and she was proud to have given her graduation speech in English language. “Somehow I was deprived from enjoying my graduation ceremony at university, and this made me sad because I always wanted to know how it feels to celebrate your own success. This is why I insisted in delivering my speech in English, because I wanted to know how it feels to be a leader, and I am happy I decided to do so,” she commented. “After finishing the three-month training, I feel like a new person. My self-esteem has increased and my involvement and understanding of the Gaza community has changed; now I can decide for myself,” she added proudly.

Since the launch of the YWLP in 2011, the programme has provided training to 3,124 young female graduates.  The aim of the programme is not only the professional development of young women, but also to raise their stance in the community and in their homes by helping them to gain self-confidence.

On 10 October, one Palestinian was reportedly injured when Israeli patrol boats opened fire towards Palestinian boats.