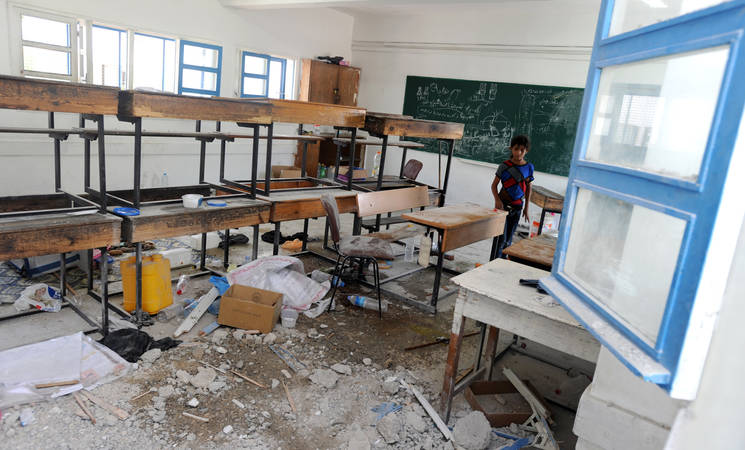 Operational environment: On 5 November, a student of the UNRWA Gaza Training Centre (GTC) was reportedly shot dead by Egyptian forces whilst in a boat in the sea off Rafah, in southern Gaza. According to UNRWA internal information, the student used to engage in fishing besides his studies to economically support his family. UNRWA expresses its heartfelt condolences to the family and is deeply saddened by this event and by all loss of life due to the protracted crisis. Palestinian fisher boats are shot at on an almost daily basis by Egyptian or Israeli forces. Due to the blockade imposed on Gaza since 2007, and related access restrictions, more than 3,000 fishermen do not have access to 85 per cent of the maritime areas agreed to in the 1995 Oslo Accords; as a result, the fish catch – a principal part of the Gaza diet – has decreased dramatically over the years of closure, as the UN previously warned in its 2012 report on Gaza 2020.

Several protests by mostly Palestinian youth in solidarity with Al Aqsa Mosque and the situation in the West Bank were reported during the week. Protests were held across the Gaza Strip, often near the perimeter fence (see Summary of Major Incidents).

These are not the only sources of anger and desperation for people in Gaza. Besides repeated armed violence, families are exposed to a wide-range of other protection gaps, such as electricity and fuel shortages, food insecurity, and extreme water pollution. Only 5 per cent of the water in Gaza is drinkable, according to the United Nations Conference on Trade and Development.  However, an article by Al Jazeera released this week states that while Gaza desperately needs water, the recent downpours have made life only harder as the enclave’s water infrastructure is unable to absorb the water because it is shattered due to a tight, almost a decade-long blockade and repeated conflicts in which heavy damage was inflicted on reservoirs and pipelines. According to a 2015 report by the Norwegian Refugee Council (NRC) titled ‘Mekorot Water Supply to the Gaza Strip’, the 2014 conflict in Gaza has resulted in US$ 34 million in damages to Gaza’s water infrastructure. The report also states that even when Israel began releasing an extra five million cubic metres (MCM) of water to Gaza in March 2015 – doubling the amount that was previously delivered and honouring the Oslo Accords – Gaza’s war-ravaged water networks cannot receive the water and are unprepared for even a minor increase.

On 4 November a dispute between school-aged children in Maghazi camp, central Gaza, resulted in the death of one child and injured the other. On 9 November, one woman was allegedly killed by her husband in Bureij camp, central Gaza. The police are investigating the incident.

The lack of electricity makes life very difficult in Gaza, especially for school children. Gaza depends on three primary electricity sources: the Israeli electricity company, the sole Gaza Power Plant and the Egyptian electricity grid. These supplies can only meet 51 per cent of the population’s needs. Acute shortages after the July/August 2014 crisis limited the electricity provision to about six hours in Gaza’s middle and north areas. One year later, Gazans still experience 12 to 16 hours of scheduled power cuts per day. The electricity cuts affect the learning and teaching abilities of UNRWA teachers and students.

This is a widely-discussed topic in the School Parliament of the UNRWA Preparatory Girls School D in Rafah, southern Gaza.

“After school I used to rest a bit before I would start doing my homework, but now I can’t because the day light period is too short and I need to finalize my studies before sunset, otherwise it is too dark and we don’t have electricity at home to turn on lights,” explained 12-year old Doha Abu Mohaisen, a newly elected member of her school’s parliament.

“One day I noticed that many of my friends wear glasses, and when I asked they said they think it is because they use rechargeable lamps to study due to the frequent electricity cuts, and this light is not bright enough,” commented her 12-year old friend and fellow parliament member, Iman Shahin.

Some students wait until the late evening hours to do their homework, because then the electricity network in Gaza usually provides households with electricity.

“Me and my brothers and sisters, we stay awake until very late to be able to study when the electricity is on, but the next day we have to wake up early and we always feel tired,“ explained 14-year old parliament member Basma Abed.

Human Rights teacher and coordinator of the School Parliament activities, Haneen Al Bana, confirmed the students’ experience with electricity cuts: “The students are programming their life according to the electricity schedule; they do not get enough sleep because they often stay awake until late in the night to study. I believe this has an effect on their education.”

During school hours UNRWA tries to mitigate the impact of electricity cuts on its students and teachers, and provides schools with generators. However, these are often noisy and of high cost for the Agency, in addition to polluting the environment.

Regular protests in support of Al Aqsa mosque and the West Bank were held in the vicinity of the perimeter fence on an almost daily basis, mostly east of Bureij camp in central Gaza, near Erez Crossing, east of Gaza city or in Khan Younis, southern Gaza. During these protests, some participants reportedly approached the perimeter fence and threw stones towards Israeli observation posts. Israeli security forces reportedly responded with gunfire and tear gas. A total of approximately 36 persons were injured due to Israeli gun fire and approximately 24 are reported to have suffered from gas inhalation. One person was killed in one of these protests on 6 November in Khan Younis.

On 4 November, militants reportedly fired one rocket towards Israel; the rocket dropped short on the Palestinian side near the fence. No injuries or damage were reported.

On 9 November, militants reportedly fired one test rocket towards Israel; the rocket dropped short and no injuries were reported.

On 8 November, militants reportedly fired one rocket towards Israel; the rocket landed in an open area near the perimeter fence in Sha'ar Ha Negev Regional Council. No injuries or damage were reported.

On 9 November, Israeli forces reportedly fired one missile targeting a military site in Rafah, southern Gaza. No injuries were reported.

KINGDOM OF SAUDI ARABIA SUPPORTS PALESTINE REFUGEES WITH 27 MILLION US$ TO UNRWA
UNRWA inaugurates a Health Centre in Jordan, donation from the Saudi Fund for Development
Amid an increase in needs and dependence on aid, UNRWA calls for reliable funding
Statement of UNRWA Commissioner-General to the Advisory Commission Meeting on UNRWA
syria: unrwa - progress highlights of emergency appeal january-june 2021
Health Annual Report for 2020
syria regional crisis emergency appeal 2021