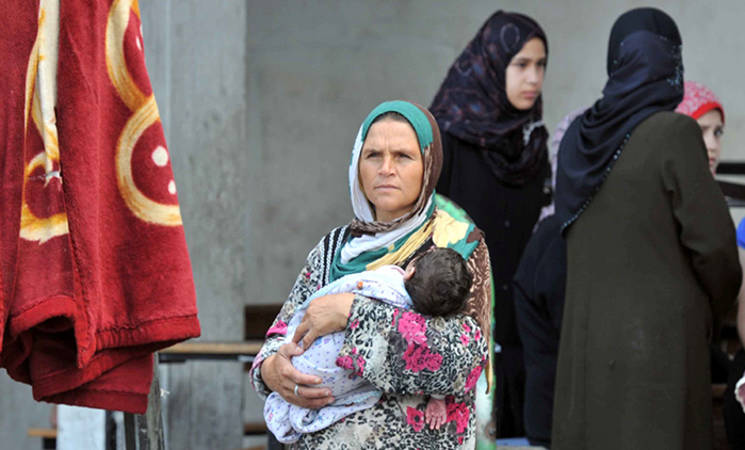 On 7 July, in response to escalating violence between Israel and Hamas, UNRWA declared an emergency in all five areas of the Gaza Strip. The number of displaced people in UNRWA schools has since gone beyond the peak number from the 2008/9 conflict, and now exceeds 83,000 in 60 schools. UNRWA has launched an emergency flash appeal for US$ 60 million to respond to the urgent humanitarian needs of the people of Gaza, including the thousands who have already fled their homes to seek safety in UNRWA facilities. The most pressing requirement is for non-food items (NFIs) to be distributed to the displaced

Past 24 hours: The tragedy of the conflict continued to unfold in Gaza overnight as the number of civilian fatalities increased yet again, with thousands more distraught civilians displaced by the relentless violence. In addition to ongoing fighting in the north of Gaza and in eastern Khan Younis, two new Israeli ground incursions occurred over night – one in the Middle Area and another in Shejaiha, east of Gaza City. At 08:00 there were a total four IDF incursions underway.

Shejaiha was particularly badly affected with thousands of people reportedly fleeing their homes this morning, as heavy bombardment from Israeli tanks and artillery continued. The situation remains tense across all of the five areas of Gaza. Medical authorities at Shifa hospital reported that 300 injured people had already been received at the hospital and confirmed 40 fatalities. Those numbers could increase significantly as it is understood that there may be many more still unable to evacuate from Shejaiha.

Hundreds of civilians, including Palestine refugees, are also crowding in the compound of Shifa Hospital – the main medical facility in the Gaza Strip. The situation could not be more dire for the collapsed health sector in Gaza, with this latest conflict only adding to the burden on overwhelmed doctors and medical staff.

This is the third war in five and a half years endured by the people of Gaza. As with previous conflicts, there is nowhere for women, men and children to escape to. The Strip is densely populated and the seven-year Israeli-imposed blockade means that people’s movement to and from Gaza remains virtually banned. Since July 2013, the operation of Rafah crossing, at the southern end of the Strip, has also been significantly reduced by the Egyptian authorities, citing security concerns.

The escalation of violence is now more acutely affecting UNRWA’s regular operations. All UNRWA installations in Magazi and Bureij refugee camps in the Middle Area are closed because of ongoing security concerns. Two health clinics remain closed and another three had operations disrupted after sustaining damage. A total of 18 UNRWA installations were closed during the reporting period.

At the moment, due to ongoing violence, it continues to be extremely difficult to deliver supplies to Beit Hanoun in the very north of the Gaza Strip, where more than 2,500 people are taking shelter in an UNRWA school. Some efforts have been made to undertake local delivery of goods within this area but access to it has so far been denied by the Israeli authorities.

All UNRWA schools in Gaza City that are in areas considered secure are now being utilized as designated emergency shelters. Whilst some funding has been secured to continue providing vital supplies such as food, water, mattresses and hygiene kits, urgent needs persist.

According to the Protection Cluster, there were at least 54 people killed over night, ten of whom were children – seven boys and three girls. The total death toll since 8 July has reached 368 people, with the Palestinian Ministry of Public Health reporting about 2,295 injured. At least 80 children are amongst the total dead. This number is expected to rise, perhaps considerably, during the course of the day.

Reportedly, there were 113 missiles, 961 navy shells and 1,045 tank shells fired into the Gaza Strip. It is reported that 44 houses were bombarded. 84 rockets and 35 mortar shells were fired towards Israel.

A total of 72 UNRWA installations have been damaged since 1 June, 2014.

In the past 24 hours, three UNRWA installations were damaged – one school in Rafah, a school in the north of Gaza and a storehouse holding NFIs, also in the north. It is understood that none of the NFIs were lost, but the store was closed after being damaged by airstrikes.

UNRWA has launched an emergency flash appeal for US$ 60 million to respond to the urgent and pressing humanitarian needs of the people of Gaza, including the thousands who have already fled their homes to seek safety in UNRWA facilities. New funding will enable UNRWA to respond to the immediate shelter, food, health and psychosocial needs of internally displaced persons (IDPs), while replenishing emergency supplies and preparing for vital interventions necessary after a cessation of military activities. The emergency response phase is expected to last for one month, and the early recovery a further three to six months. More information on the appeal can be found here:  klickhere.