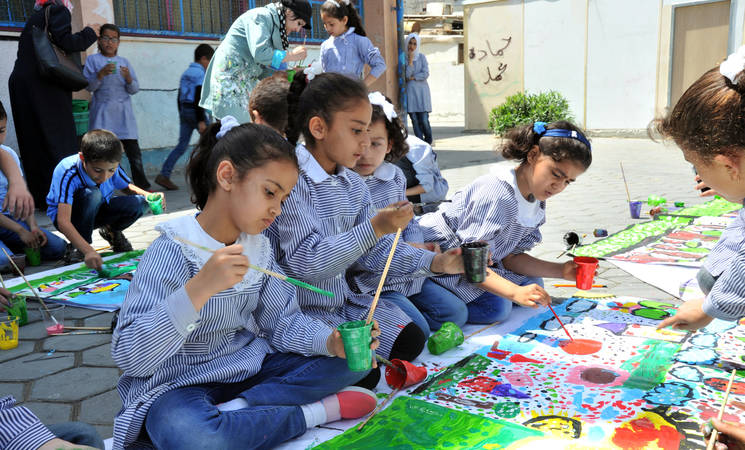 Operational environment: While developments in the West Bank and Jerusalem remain alarming, during the reporting week the security situation in Gaza was similar to the previous reporting week. For the seventh consecutive week, however, protests in support of Al Aqsa Mosque and developments in the West Bank continued and again drew hundreds of people, mostly youth, to protest across Gaza and in the vicinity of the perimeter fence.

On 20 November, Israeli forces arrested one Palestinian who tried to cross into Israel from southern Gaza.

Protests were also held in support of Palestinian prisoners in Israeli jails, against the closure of the Rafah crossing and at UNRWA facilities in relation to employment opportunities and/or shelter requests.

One incident of inter-familial violence was reported when on 20 November a 2-year old Palestinian girl was allegedly killed by her step mother in Khan Younis, southern Gaza. The incident is being investigated.

UNRWA is supporting healthy families through its family planning services

In an environment of increasing health care needs – particularly with the increase of chronic non-communicable diseases, rising health care costs and limited financial resources – family planning has become a pivotal service for refugee families across the Gaza Strip.

UNRWA first introduced family planning services in the Rimal Health Centre in Gaza city in 1970, 45 years ago. By 1982, these pioneer services were included in all of its Health Centres across the Gaza Strip as part of the Agency’s ongoing efforts to improve the quality and accessibility of primary health care services for Palestine refugees. Family planning services, including counselling and the provision of modern contraceptives, are available at all times to women accessing UNRWA health centres.

“Over time, families, especially the women, became aware of the importance of active family planning; they understand how crucial such planning is for the health of themselves and their children,” explained 47-year old Tamam abu Zaied who works as senior nurse in the UNRWA Rimal Health Centre and for the past five years has focused mainly on family planning services.

“I have four children; between each of them I had a two year break as part of my family planning. I have more time for each child and I am better able to care about my own and my family’s health,” confirmed 35 year old refugee Imad Oda.

Family planning services, including reproductive health, counseling and the provision of contraceptives, are an integral part of maternal and child health services through pre-conception care, antenatal care, intra-natal care, or postnatal care, along with growth monitoring for children under 5 years of age.

“The health of mothers is crucial for sustaining healthy families, and particularly healthy children,” commented Soad Abu Hasan, a midwife working in the Rimal Health Centre.

Family planning services will be further strengthened through the recently introduced Family Health Team (FHT) approach. The FHT approach introduced a shift of focus, from treating specific ailments to taking into consideration the comprehensive health status of a family. In terms of family planning this also means an increase in the participation of males in protecting and promoting family health.

Regular protests in support of Al Aqsa mosque and the West Bank were held in the vicinity of the perimeter fence, yet the overall number of participants and demonstrations related to this issue has slightly decreased compared to the last reporting period. Protests took place east of Bureij camp in central Gaza, east of Gaza city, in the vicinity of Erez crossing or in Khan Younis, southern Gaza. During these protests, some participants reportedly approached the perimeter fence and threw stones towards Israeli observation posts. Israeli security forces reportedly responded with gunfire and tear gas. A total of approximately 31 persons were reportedly injured due to Israeli gun fire and approximately six are reported to have suffered from gas inhalation.

On 17 November, militants fired one rocket from central Gaza towards Israel; the rocket landed in an open area in Eshkol Regional Council. No injuries were reported.

On 20 November, militants fired two rockets from Gaza city towards Israel; the rockets dropped short and landed inside Gaza areas. No injuries were reported.

On 21 November, militants fired two test rockets towards the sea.

On 23 November, militants fired one rocket from central Gaza towards Israel. The rocket landed in an open area in Eshkol Regional Council.  No injuries were reported.

On 23 November the Israeli Air Force fired one missile targeting a Hamas training site in Maghazi area in central Gaza. No injuries were reported.