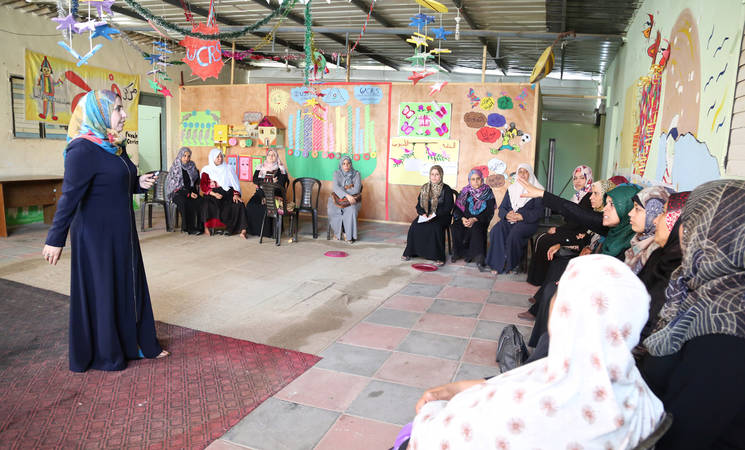 Operational environment: UNRWA shows its solidarity with the Palestinian people every day through its comprehensive operations, aimed at mitigating the devastating effects of an ongoing - and repeated - displacement crisis. Palestine refugees in Gaza face increasing vulnerability and many are confronted with a feeling of ‘having nothing to lose’ and suffer from an existential crisis due to ongoing and growing isolation of the Gaza Strip.

Feelings of confinement, followed by high levels of frustration, resentment and hopelessness, have also this week led hundreds of people, mainly youth, to protest in support of Al Aqsa Mosque and developments in the West Bank across Gaza and in the vicinity of the perimeter fence. Demonstrations were also held against the banning of Islamic Movement in Israel, for more women rights and for ending violence against women, and for the release of Palestinian children from Israeli jails.

One incident of intra-familial violence was reported during the reporting week. On 25 November, an 18-year old girl was killed by her brother in northern Gaza. The police opened an investigation.

As part of several other ongoing activities during these 16 days, between 25 November and 1 December the Agency organized a training for a total of 231 preparatory level human rights and health teachers on GBV, early marriage and adolescent health. The training aimed at increasing the teacher’s theoretical knowledge and skills, and also at tackling wide-spread stereotypes of gender roles.

Thus, at the beginning of each training session, trainer Jawaher Barakat, a member of the Gaza women’s organisation Aisha, asked the participants to write down conventional characteristics of men and women in an exercise to create awareness and understanding of the difference between gender and sex.

“Women can be everything, from doctors to teachers, managers or community leaders,” commented UNRWA human rights teacher Hend Siam in a lively discussion. “Women play an equally important role in the community as men do.”

UNRWA has been delivering human rights education in its schools since 2000 to promote non-violence, healthy communication skills, peaceful conflict resolution, Human Rights, tolerance and good citizenship. Through this education, UNRWA empowers Palestine refugee students to enjoy and exercise their rights, uphold human rights values and contribute positively to their society and the global community. The aim of the special training sessions for human rights teachers thus mainly aims at transferring the newly gained knowledge and awareness to their students during their regular lessons in all UNRWA schools.

“We need to treat others the way we would like them to treat us; imagine you are born as a woman, and then think about how you want others to treat you,” explained UNRWA Professional Development and Curriculum Coordinator Ibrahim Wishah, who co-organized the trainings, to the participants. And later he added: “human rights teachers carry important messages; we need to invest in them to raise awareness on gender-based violence among our students.”

This approach is also shared by Jawaher Barakat: “Women, equally to men, have the power, will and the right to create change. If teachers transfer these ideas to their students through the human rights education in UNRWA schools, then we will create a conscious generation that understands the true meaning of women rights and equality,” she said.

The annual ‘UN 16-days against Gender-Based Violence’- campaign is a top priority for achieving the UNs founding mission of peace, development and Human Rights.  It is as important a goal for men and boys as it is for women and girls. The 2015 theme, “From Peace in the Home to Peace in the World: Make Education Safe for All” speaks significantly to UNRWA work in Gaza, and at the same time provides an opportunity to look at further work on offering tools and information to the refugee community on this important issue.

Regular protests in support of Al Aqsa mosque and the West Bank were held in the vicinity of the perimeter fence. Protests took place east of Bureij camp in central Gaza, east of Gaza city, in the vicinity of Erez crossing or in Khan Younis, southern Gaza. During these protests, some participants reportedly approached the perimeter fence and threw stones towards Israeli observation posts. Israeli security forces reportedly responded with gunfire and tear gas. A total of approximately 22 persons were reportedly injured due to Israeli gun fire and approximately seven are reported to have suffered from gas inhalation.

On 25 November, three Israeli bulldozers and one tank reportedly entered approximately 200 metres into central Gaza to conduct a clearing and excavation operation.

On 26 November, militants reportedly fired one rocket from northern Gaza towards Israel; the rocket dropped short and landed inside Gaza. No injuries were reported.