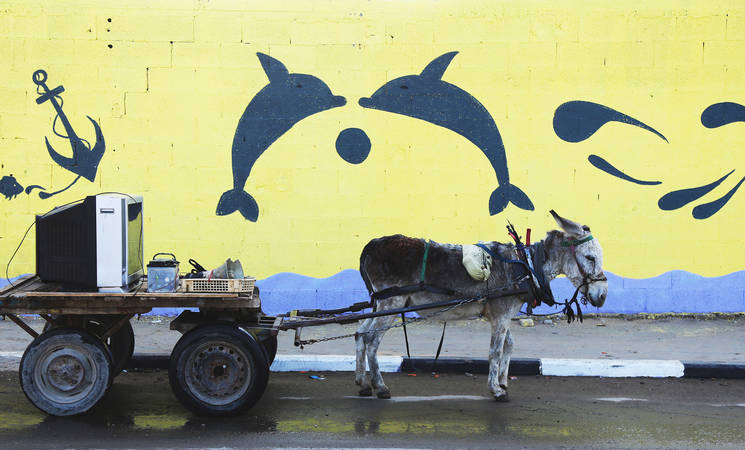 Operational environment: In Gaza, feelings of hopelessness and powerlessness continue to contribute to a sense of insecurity and protests against the situation in the West Bank and at Al Aqsa mosque. For the tenth consecutive week, hundreds of protestors, mainly youth, have demonstrated in support of Al Aqsa Mosque and to express concern over developments in the West Bank, across Gaza and in the vicinity of the perimeter fence. Due to the protracted Gaza crisis – with a blockade now in its ninth year and three conflicts within the past seven years – tensions and insecurity have become the norm, also resulting in the deterioration of social cohesion and regular reporting of intra-familial and domestic conflicts.

Further, regular protests took place during the reporting week in support of Palestinian prisoners in Israeli jails; demonstrations were also directed towards UNRWA in relation to a demand for employment.

On 19 December, a fire broke out in a house in Beach camp in western Gaza city, reportedly due to the misuse of candles. Candles are often used in Gaza due to frequent electricity and power cuts. No injuries were reported in the incident.

On 17 and 19 December, Israeli forces arrested a total of four Palestinians who tried to illegally enter Israel from central
Gaza.

On 19 December, a 16-year old boy accidently shot and killed himself while handling a weapon in his house in the Khan Younis refugee camp in southern Gaza.

Due to the complex reconstruction process in the Gaza Strip and the related ongoing displacement, UNRWA continues to provide Palestine refugee families whose homes were completely destroyed or rendered uninhabitable during the 2014 conflict with transitional shelter cash assistance (TSCA) as funds becomes available. Rental subsidy payments enable families to live in dignified accommodations until UNRWA is able to provide them with payments to repair or reconstruct their own homes.

57-year old Abdel Kareem Al Ijleh’s family is from the neighbourhood of Shujjaiya in eastern Gaza city, which was heavily impacted during the summer 2014 hostilities. The family continues to receive rental subsidy payments (TSCA) from UNRWA. Abdul, his wife Khitam and their nine children were forced to flee their home early during the conflict due to intense nearby shelling. The family found shelter in the house of their extended family in another part of Gaza city, and later discovered that their original home was completely destroyed.

The family stayed with their extended family for some weeks, until shortly after the announcement of a ceasefire to the 2014 conflict on 26 August 2014, and following UNRWA engineer’s assessments of their home, the family was found eligible for emergency shelter assistance from UNRWA. The Agency was able to provide them with payments enabling them to rent their own apartment as a temporary home. “When my family and I arrived to this apartment, I did not care about the furniture or blankets or mattresses or even food, all that I cared about was being safe and that was how I felt in this apartment,” Abdel Kareem recalled.

The Ijleh family feels somehow lucky that they received support from UNRWA to live in a dignified shelter with enough privacy for everyone until such a time as they can relocate to a more permanent house. “We remain displaced to this day, and this is difficult; however, at least we have this rented apartment that protects us well from the hot summer and the cold winter,” added Khitam Al Ijleh.

Memories of the conflict are still raw for the family, even as they hope to rebuild their home. “The rubble and the smell of the bombs is still in my mind; nevertheless I hope that one day our house will be rebuilt,” commented 12-year old Zein Al Ijleh.

Regular protests in support of Al Aqsa mosque and the West Bank were held in the vicinity of the perimeter fence. Protests took place east of Bureij camp in central Gaza, east of Gaza city, in the vicinity of Erez crossing or in Khan Younis, southern Gaza. During these protests, some participants reportedly approached the perimeter fence and threw stones towards Israeli observation posts. Israeli security forces reportedly responded with gunfire and tear gas. A total of approximately 40 persons were reportedly injured due to Israeli gun fire and approximately 17 are reported to have suffered from gas inhalation. Three of the injured youth were UNRWA students from the Gaza Middle Area. Both were injured in the legs. One Palestinian was reportedly killed in a protest on 18 December by Israeli gunfire in Khan Younis area.

On 16 December, an Improvised Explosive Device (IED) reportedly detonated near a vehicle of Israeli forces in Khan Younis area, southern Gaza. The Israeli forces reportedly responded with heavy machine gun fire and fired 12 shells towards Gaza areas, injuring three Palestinians. This was the first reported usage of IEDs at the fence area since the 2014 conflict.

On 17 December, four Israeli bulldozers reportedly entered approximately 100 metres into Khan Younis area in southern Gaza to conduct a clearing and excavation operation. They withdrew on the same day.

On 17 December, militants reportedly fired one rocket from northern Gaza towards Israel. The rocket dropped short and
landed inside Gaza; no injuries were reported.

On 18 December, militants reportedly fired two test rockets from Gaza city and one test rocket from Khan Younis
towards the sea

On 18 December, four Israeli bulldozers and two Israeli tanks reportedly entered approximately 100 metres into Khan
Younis area to conduct a clearing and excavation operation. They withdrew on the same day.

On 20 December, militants reportedly attempted to fire one rocket from southern Gaza towards Israel. The rocket
exploded at the launching site. No injuries were reported.

On 21 December, four Israeli bulldozers and two Israeli tanks reportedly entered approximately 100 metres into east of Khuza’a in southern Gaza to conduct a clearing and excavation operation. They withdrew on the same day.

Thanks to generous donors, UNRWA has overcome its immediate and most serious financial crisis. For 2016, the Agency now projects a deficit of US$ 81 million, down from US$ 135 million as estimated earlier this year. This is the first time in ten years that UNRWA expects a zero-growth programme budget owing to strategic changes in staffing, business processes including procurement, budgeting norms, and service delivery models, amongst other measures.