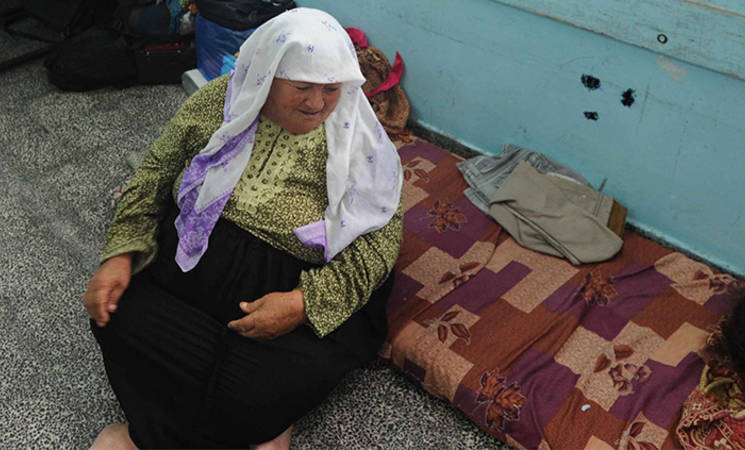 On 7 July, in response to escalating violence between Israel and Hamas, UNRWA declared an emergency in all five areas of the Gaza Strip. The number of displaced people has since gone beyond the peak number from the 2008/9 conflict, and exceeds 84,000 in 67 schools. UNRWA has launched an emergency flash appeal for US$ 60 million to respond to the urgent and pressing humanitarian needs of the people of Gaza, including the thousands who have already fled their homes to seek safety in UNRWA facilities.

Past 24 hours: The past 24 hours marked the deadliest period since the current escalations of violence began, with 107 Palestinians killed, including 23 women and 35 children. Tragically, the total number of children killed in the current conflict has now passed 100 and represents almost one quarter of all Palestinian fatalities. 13 Israeli soldiers were reportedly killed in this 24- hour period.

The densely populated Shejayeh area, in the Eastern part of Gaza City suffered the most extreme levels of violence during this period, with at least 72 Palestinians killed (38 men, 13 women and 21 children) in a major escalation of the IDF ground offensive. A brief humanitarian pause to evacuate the wounded and dead was only partially implemented, with rescuers reportedly unable to access some areas of Shejayeh to provide assistance. Scenes at Shifa Hospital following the escalation in Shejayeh have been widely reported, with hospital staff overwhelmed with mass casualties.

An expanded IDF ground offensive has resulted in an exponential increase in Internally Displaced Persons (IDPs); it is estimated that up to half of Shejayeh’s residents fled their homes in reported scenes of panic during this period. The number of displaced Palestinians in UNRWA shelters across the Gaza Strip climbed sharply from 63,000 on 20 July to 84,843 on 21 July. This sharp increase has presented significant challenges to UNRWA operations, with shelters overwhelmed with huge numbers of displaced.

The continuing conflict is having an impact on delivery of basic services. Despite strong commitment from UNRWA sanitation staff, the Agency is struggling to maintain solid waste management operations in the context of ongoing escalations in violence and high numbers of IDPs in shelters. This presents a potential serious public health risk.

The ongoing conflict also presents a major concern regarding the risk of Unexploded Ordnance (UXO), especially to children. UNRWA is providing basic UXO awareness in shelters and will delivering a morecomprehensive awareness program once current hostilities cease.

“Gaza is an open wound”. This is how, speaking from Doha on 20 July, UN Secretary-General, Ban Ki-Moon described the current situation in Gaza. The Secretary- General condemned the killings of civilians, including children in Shejayeh as an “atrocious action” and called for an immediate end to the violence, stating that “too many innocent civilians are dying”. The Secretary- General’s statement was made during a late- night session of the UN Security Council, at which members reportedly expressed serious concern at rising casualty numbers and called for respect of international humanitarian law to be upheld. International pressure for an end to the conflict is continuing; with US Secretary of State John Kerry expected in Egypt discuss the crisis.

A total of 75 UNRWA installations have been damaged since 1 June, 2014.

In the past 24 hours, three UNRWA installations were damaged – one school in Bureij, a school in Nuseirat and the Microfinance Office in Middle Area.

UNRWA has launched an emergency flash appeal for US$ 60 million to respond to the urgent and pressing humanitarian needs of the people of Gaza, including the thousands who have already fled their homes to seek safety in UNRWA facilities. New funding will enable UNRWA to respond to the immediate shelter, food, health and psychosocial needs of internally displaced persons (IDPs), while replenishing emergency supplies and preparing for vital interventions necessary after a cessation of military activities. The emergency response phase is expected to last for one month, and the early recovery a further three to six months. More information on the appeal can be found here.

Based on the escalating number of IDPs and further destruction of shelters, a revised appeal will be released shortly.