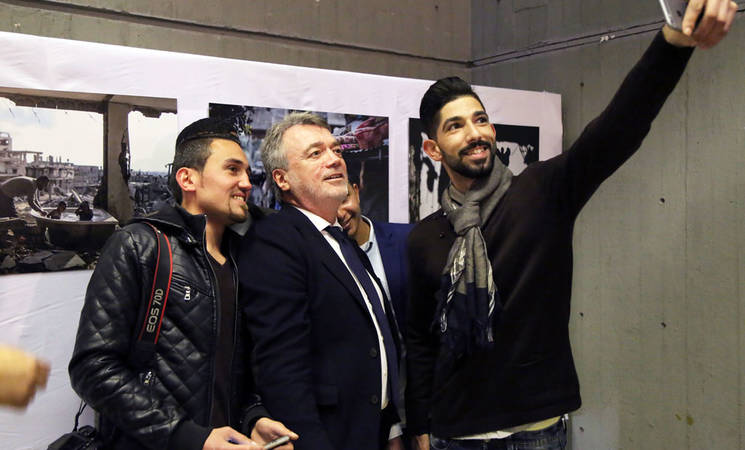 Operational environment:  A number of protests, sit-ins and demonstrations were reported between 9 and 16 February. This included demonstrations regarding demands for shelter support from UNRWA and/or UNSCO, protests against a decrease of UNRWA hospitalization services in Lebanon and demands for job opportunities through UNRWA. Palestinian doctors also held a sit-in at Abu Mazen Square, west of Gaza City demanding their entitlements from the Palestinian Ministry of Health. Several protests were held in solidarity with the West Bank journalist, Mohammed Al Qeeq, whose hunger strike and detainment has been widely reported in the media.

On 15 February, part of a building at Al Aqsa University branch in Khan Younis, southern Gaza, collapsed. One fatality and twenty-two injuries were reported.

On 9 February, a mortar shell was reportedly found in a bag at Sheja’iyeh junction. The shell was removed by the Explosive Ordnance Disposal (EOD) Police. No injuries were reported. On the same day, unknown persons reportedly detonated an Improvised Explosive Device (IED) in front of a billiards venue in Zaitoun area. No injuries were reported but the venue sustained damage. The police opened an investigation into the event.

Special Education in UNRWA schools: ensuring inclusive and equitable quality education for all

The UNRWA Inclusive Education Policy reaffirms the Agency’s commitment to the realization of the universal right of all children to an education. Inclusive education is an important pillar of the UNRWA Education Programme in Gaza and is closely linked to its Disability Programme.

In the current school year (2015-2016) there are approximately 10,640 persons (6,409 boys and 4,231 girls) with disabilities studying in UNRWA schools in Gaza. These students live with various major motor, fine motor, visual, hearing, health, speech and other impairments. Nonetheless, they are enthusiastic to learn and participate in traditional schooling.

Special Needs students are encouraged to attend UNRWA schools, and the Inclusive Education approach helps them to integrate into mainstream schooling by providing them with extra support. In cases where more specialized support is needed, the Agency refers students to Community-Based Rehabilitation Centres (CBRCs). UNRWA currently supports seven CBRCs across the Gaza Strip, providing services to persons with disabilities, including educational services, to approximately 800 refugee children. Further, the Agency directly supports 132 visually impaired children through the UNRWA Rehabilitation Centre for Visually Impaired in Gaza city. There are also 11 learning support centres in Gaza, each of which provide special services to children in need.

Fourteen year old Moaaz Abu Daher is one of fifteen children with special needs attending an UNRWA school in Deir el Balah. In addition to receiving inclusive teaching methods in the classroom, the students receive psychosocial support and appropriate health and medical resources.

Moaaz is a keen footballer and enjoys playing sports with his friends at school. He also has a prosthetic leg, having had his leg amputated due to bone cancer. He believes his disability will never hinder him in his sports and study.

Some UNRWA students also receive speech therapy lessons at home; their parents are provided with information and awareness on special needs. UNRWA teachers have also been trained on the Inclusive Education approach in order to enable them to identify and respond to the diverse needs of students in a professional manner.

“We try to give the students some stress release activities, such as drawing,” said 46 year old Samir Hamda, a school counsellor. “We also conduct awareness-raising sessions on special needs for parents.”

On 9 February, militants fired one test rocket from west of Khan Younis towards the sea.