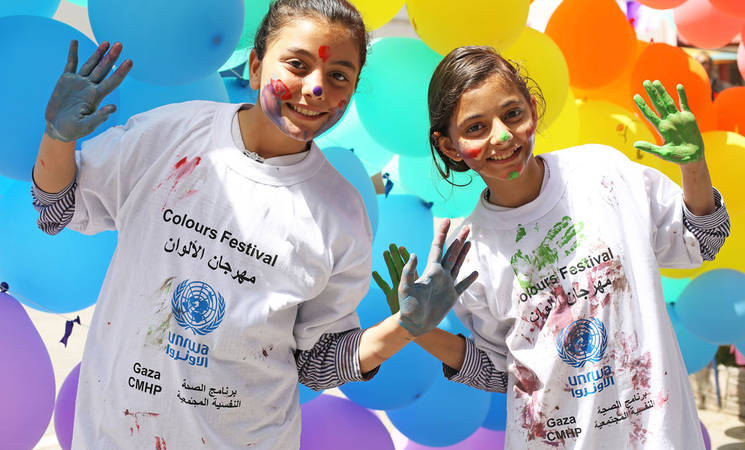 Overview of assistance disbursed (as of 14 April)

Operational environment: During the reporting week, protests and demonstrations took place across Gaza, predominately in solidarity with Palestinian prisoners in Israeli jails on Palestinian Prisoners’ Day commemorated on 17 April. Other demonstrations were held regarding the ongoing electricity shortages, in support of reconciliation between different Palestinian factions, and in support of developments at Al Aqsa Mosque and in the West Bank (see Summary of Major Incidents).

On 13 April a policeman was shot when reportedly his colleague accidently discharged his weapon in Khan Younis, southern Gaza; the police launched an investigation.

On 15 April, a 20-year old male was found dead in Rafah, southern Gaza, reportedly due to a bullet in his head. The police opened an investigation.

On 15 April, during a rally organized by the Fatah movement in Bureij camp, central Gaza, to mark the 28th anniversary of the assassination of Fatah leader Khalil Al Wazir, an internal dispute allegedly erupted between supporters of Palestinian president Mahmoud Abbas and supporters of Palestinian politician Mohammed Dahlan. Chairs and batons were reportedly used. No injuries were reported.

On 16 April an Explosive Device exploded during a military training exercise in eastern Gaza city; two militants were reportedly injured.

On 17 April, a Palestinian male reportedly attempted to commit suicide by burning himself in southern Gaza; he sustained moderate burns. The police opened an investigation.

On 18 April, a 37-year old man was reportedly found dead in southern Gaza. Following the incident, dozens of persons from his family reportedly gathered in the streets of Khan Younis, burning tires and closing commercial shops by force as a form of protest against the killing.

On 18 April, a homemade bomb reportedly detonated in Gaza area; one woman was reported as injured.

On 18 April, Egyptian security forces reportedly pumped water into tunnels under the border between Egypt and Gaza. The Palestinian Rescue Crew reportedly rescued seven Palestinian workers who were trapped in the tunnels.

“If you have a dream, don’t be afraid to follow it”: 15-year old marathon runner challenges stereotypes in Gaza

15-year old Palestine refugee Inas Nofal, from Al Maghazi camp in central Gaza, dreams about becoming a famous marathon runner. For more than nine months she has trained every day for four hours, together with her sports teacher Sami Natil, in an empty lot located inside the camp.

“Girls can be talented sports people, and they are able to compete,” Inas said. “Gaza is not only about conflict and damage, we can also be successful. I do sports because I want to be healthy, and because as a girl I want to prove that I can.”

Inas for the first time participated in a marathon in Beit Hanoun in northern Gaza in November 2015, where she won the first prize. After this success, she was even more motivated and increased her training, particularly because she wanted to run the fourth annual Palestine marathon held in Bethlehem in the West Bank, in early April 2015.  Yet Inas, along with many other Palestinians from Gaza who dreamt of participating, did not receive a permit from the Israeli authorities to exit the Gaza Strip for the event.

“I was so excited when I got the invitation for the Palestine marathon, and when I didn’t get the permit, I felt disappointment,” Inas said.

The blockade on Gaza, which enters its tenth year in June 2016, imposes severe restrictions on the movements of goods and people to and from the Strip. It is not the only obstacle Inas has faced, however. Due to conservative values and gender stereotypes prevailing in Gaza, Inas felt a large part of the community did not agree to a girl publicly engaging in physical activities when she commenced her running. Over time, she feels that this has changed for her, and people have become used to her activities. These days, she is even regularly joined by 15 other girls who also wish to participate in marathons.

“Changing thoughts and prejudices is not something very easy in Gaza, but it is not impossible,” the teenager commented.  Inas has the full support of her family, who often accompany her to training sessions to watch and support her.

“I support my daughter as she has the right to practice sport the same as anyone else, and also it is good for her health,” Mohammed Nofal, Inas’s father, explained.

Inas remembers her first training session, when she wasn’t even able to run for longer than half a minute, as she explained, laughing. Today, she easily runs 10 kilometres and she is now preparing to participate in many more marathons all over the world.

“If you have a dream, don’t be afraid to follow it,” is Inas’s message to other girls in Gaza with big dreams and high expectations.

UNRWA supports physical activities for girls through its regular sports education in its schools, and through special projects such as the social and educational Real Madrid sports project which aims at enhancing refugee children’s sports skills and team spirit, and providing them with a safe space for recreational activities. It is implemented in 15 of 257 UNRWA schools across Gaza, targeting 580 female and male students. Eight of the 15 schools are girls’ schools.

While sports and recreational activities are no panacea for the eradication of poverty, hunger, child mortality or disease, the United Nations recognizes them as powerful tools in the advancement of development and peace objectives. By providing women with such spaces, opportunities and programmes, UNRWA effectively empowers women to take on a more self-confident and proactive role in the community.

On 14 April, Palestinian militants reportedly fired two rockets from east of Gaza city towards Israel; both rockets dropped short and landed near the perimeter fence in Gaza areas. No injuries or damage were reported.

On 15 April, Palestinian militants reportedly attempted to fire one rocket from Gaza city towards Israel; the rocket exploded at the launching site. No injuries were reported.

On 16 April, one Israeli bulldozer and two tanks reportedly entered approximately 100 metres into southern Gaza, to conduct a clearing and excavation operation. They withdrew on the same day.

On 17 April, Palestinian militants reportedly fired one test rocket from southern Gaza towards the sea. No injuries or damage were reported.