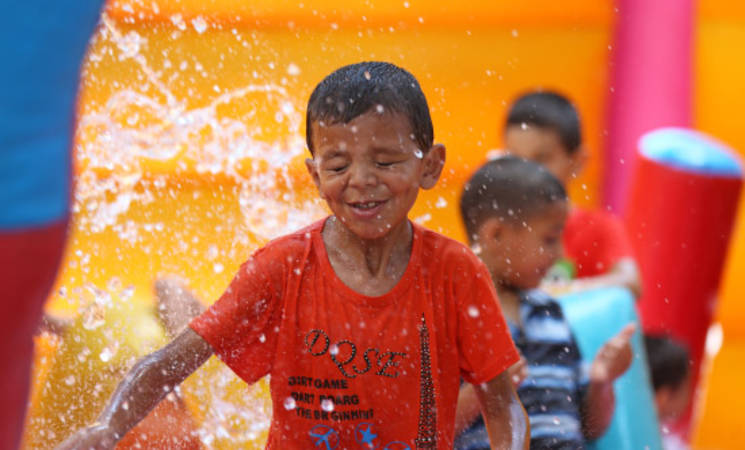 Operational environment: During the reporting week, a number of protests and demonstrations took place across Gaza, predominantly to commemorate the 68th anniversary of Al Nakba*. Other demonstrations were held regarding financial entitlements for families of those killed or injured during the 2014 summer hostilities, remembering family members who were killed by Israeli forces during the 2014 hostilities, demanding accelerated trials for those accused of murder, protesting the closure of Rafah, the blockade, electricity shortages, in solidarity with the Palestinian prisoners in Israeli prisons, and in support of developments at Al Aqsa Mosque and in the West Bank. (see Summary of Major Incidents)

On 17 May, a fire reportedly broke out inside a workshop in Gaza city.  Local authorities rushed to the scene and controlled the situation. No injuries were reported.

On 18 May, a 4-year old child was reportedly found dead in a house in Jabalia camp. The police opened an investigation.

On 18 May, three unknown persons physically assaulted an UNRWA guard at the UNRWA Gaza Training Centre (GTC), where the guard was beaten and moderately injured. He was transferred to the hospital for treatment.

On 18 May, a Palestinian man reportedly attempted to commit suicide and threatened to kill his daughter in Rafah city, southern Gaza. The police intervened and controlled the situation after arresting him.

On 19 May, a fire reportedly broke out in a house in Khan Younis area, southern Gaza due to cooking gas leakage.  Local authorities rushed to the scene and controlled the situation. No injuries were reported.

On 19 May, an explosion reportedly occurred in Deir al Balah; one person was reported as injured.

On 19 May, unknown persons reportedly burnt a vehicle in Khan Younis area, southern Gaza. The police opened an investigation.

On 21 May, a 7-year old boy of a displaced family reportedly died in Beit Hanoun, northern Gaza, after a metal door of a caravan fell on him.

On 22 May, a 35-year old person reportedly attempted to commit suicide and was injured. The police opened an investigation.

During the reporting period, one person with his two family members continued his sit-in in Gaza city for the 8th consecutive day demanding the re-payment of his salary which was cut by the Palestinian Authority in 2007. The sit-in is ongoing.

*’Nakba’ is the Arabic word for ‘catastrophe’ and refers to the establishment of the state of Israel in 1948 and the accompanied displacement of hundreds of thousands of Palestinians.

The ERW risk education project is one of UNRWA’s outreach activities on safety and risk education. It is implemented by the UNRWA Safety and Security Division (SSD) with technical support from UNMAS. All 257 UNRWA schools participated in the project, and every school nominated at least three teachers for the Training of Trainers (ToT). Each teacher passes the experience and skills from the training on to the other teachers in the school who conduct awareness sessions with the students.

Ten-year old Sali Hwihi a student in the UNRWA Beit Hanoun Elementary co-ed A School is one of the children who participated in these awareness sessions. Sali said “In the session I learned many good things I had never heard about before. For example I learned what ERW is, what the different types of ERW are and who to contact when I see ERW.” Sali also commented “because of the conflict many places were attacked and Beit Hanoun is one of these, so all children here face the risks of ERW.”

Sali lives in Beit Hanoun which is considered one of the most affected areas in the Gaza Strip during the 2014 conflict. After the 2014 summer hostilities more than 7,000 ERW are estimated to remain in the Gaza Strip. Although in January 2016, over 40 per cent of ERW had been identified and destroyed, the remaining ERW continue to pose a threat to the population living in Gaza, particularly to children who play in conflict-affected areas and adults who work on agricultural land potentially contaminated by ERW.

“I got the information from my teacher and then I went and taught my brothers, sisters and my parents. I want to ensure all people around me know about the risk of ERW, because people can die, get injured or get a disability because of it,” Sali recalled.

The ERW risk education sessions started on 7 March and are still ongoing. Until now 32 sessions have been conducted and 726 teachers (313 men and 413 women) were trained on different topics such as the definition of ERW, their shapes, sizes and types such as unexploded ordnance (UXO) and abandoned explosive ordnance (AXO), mines (anti-tanks and anti-personal), dangerous places and signs of ERW presence, hazards and effects of ERW and safety and security procedures around ERW.

Sali also said “After I participated in the session, I wanted to know more so I went and looked for more information on the internet. When children play, they go everywhere so it’s important to know about ERW.”

UNRWA also provides this training opportunity to its other staff, especially those working on the front line, including social workers and engineers. In addition, the UNRWA satellite channel (UNRWA TV) produced short films to raise awareness on the correct procedures for identifying and safely responding to ERW contaminations. The educational films are broadcasted on UNRWA TV and on YouTube, benefiting also millions of people at risk outside of Gaza.

Protests in support of Al Aqsa mosque and the situation in the West Bank were held across Gaza and in the vicinity of the perimeter fence. Protests near the perimeter fence, involving approximately 100 persons, predominately youth, took place east of Bureij camp in central Gaza and east of Gaza city. During these protests, some participants approached the perimeter fence and reportedly threw stones towards Israeli observation posts. Israeli security forces reportedly responded with gunfire and tear gas. The Ministry of Health reported that two Palestinians were injured as a result.

On 19 May militants reportedly fired two rockets from Khan Younis, southern Gaza, towards the sea. No injuries were reported.