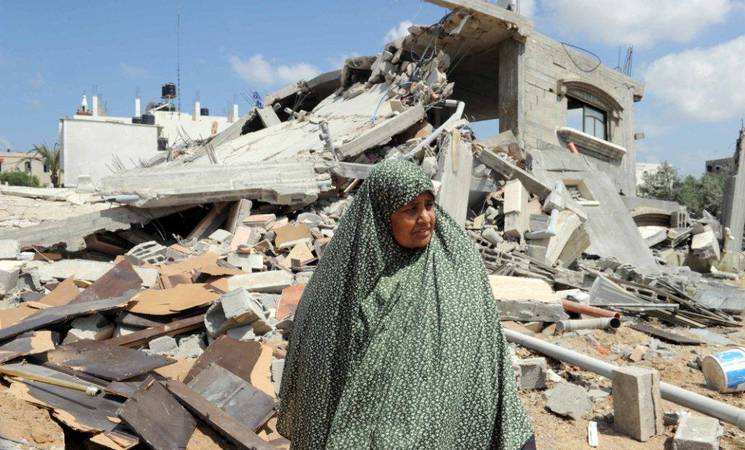 Yesterday marked two weeks since UNRWA declared an emergency in all five areas of the Gaza Strip in response to escalating violence between Israel and Hamas. Since then, civilian displacement and fatalities have risen sharply. The total number of Palestinian deaths reported by the Protection Cluster currently stands at 656. The number of displaced people is now more than double the peak number from the 2008/9 conflict, and now exceeds 117,468 in 77 schools. UNRWA has launched an emergency flash appeal for US$ 115 million to respond to the urgent and pressing humanitarian needs of the people of Gaza.

Past 24 hours: The current escalation in violence is significantly impacting on UNRWA operations and capacity to respond to urgent needs of the civilian population in Gaza. Movements are severely restricted by a 3km ‘buffer zone’ instituted by the Israeli Defense Force (IDF), which encompasses roughly 43 percent of the entire territory; as well as by heavy fighting in some other areas. Access to UNRWA facilities East of Salah El Din Road is particularly challenging. While a number of efforts have been made at implementing temporary ceasefires, these have not been fully successful. The expanded ‘buffer zone’ and military activities are also restricting the delivery of humanitarian aid and movement of civilian populations; and UNRWA calls on all parties to uphold respect for the principles of International Humanitarian Law (IHL) and allow humanitarian access to all areas of the Gaza Strip.

Further highlighting major concerns regarding respect for IHL, on 22 July, while UN officials were at Maghazi Preparatory Girls School investigating the previous day’s incident where the school was struck by explosive ordnance believed to have been fired by Israeli forces, there was further shelling at the school. This incident seriously endangered the lives of UN humanitarian workers and displaced civilians and occurred within the window of time that had been coordinated with Israeli authorities to allow freedom of movement for relevant UN personnel. UNRWA calls on the Israeli authorities to carry out an immediate and comprehensive investigation.

A further serious concern to UNRWA is that of respect for the neutrality of its installations, with rockets being found in an UNRWA school yesterday for the second time since current conflict commenced. UNRWA strongly condemned the group or groups responsible for this flagrant violation of international law.

According to the Protection Cluster, the number of Palestinians reported killed in the current escalation in violence has now reached a staggering 656. Speaking at a news briefing in Geneva on 22 July, OCHA Spokesperson Jens Laerke stressed that “there is literally no safe place for civilians” in Gaza. In the past 24 hour period, 74 Palestinians were reported killed, including 10 women and 10 children. According to the Ministry of Health, the total number of Palestinians reported injured since the current emergency began has climbed to 4,120. Two Israeli soldiers were reportedly killed during this period, with international media reporting that the Israeli death toll currently stands at 31, including two civilians. It is with great sadness that UNRWA has received reports of another UNRWA staff member being killed overnight.

UNRWA has been providing shelter to people displaced by this conflict since 12 July. Since the Israeli ground offensive started on 17 July, numbers of IDPs in Gaza have risen dramatically, more than doubling between 17 and 18 July and rising by more than 10,000 people in every 24- hour period since (up to 22 July). In this context, UNRWA commends its staff who are working tirelessly in shelters supporting thousands of distressed people, under great pressure while they themselves continue to suffer the impacts of the conflict. With Gaza communities having sadly lived through a number of escalations in violence in the recent past, UNRWA schools are seen as community assets providing refuge at times of conflict. It is vital that respect for IHL is upheld and UNRWA shelters continue to be able to provide relative safety to displaced civilian populations. 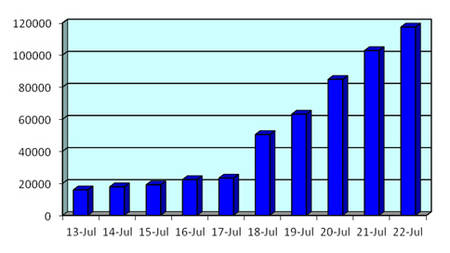 While Palestinians would normally be enjoying an evening iftar meal with their families and communities during this holy month of Ramadan, many are instead reliant on UNRWA food provided in shelters. Throughout the current emergency, UNRWA, together with the World Food Programme (WFP) has provided basic food to IDPs in UNRWA shelters despite huge challenges. All IDPs in UNRWA shelters are now provided with a food package of bread, canned tuna and meat, biscuits, cream cheese and fresh vegetables. This food is provided in the context of access restrictions and severely stretched local supplies. For example, local bread producers are already at maximum production capacity and UNRWA is working to access all available supplies of other items on the local market. Suppliers in Gaza and North Areas have indicated that they would not be able to provide food for more than one or two days if roads were cut and Kerem Shalom crossing was closed. Since shelters were opened, UNRWA has provided more than 400 tonnes of food to IDPs, thanks to an incredible effort by UNRWA teams to transport and deliver food under incredibly difficult circumstances.

UNRWA has been making a huge effort to provide Non Food Items (NFIs) to meet rapidly expanding needs in its shelters. A total of 20,000 mattresses, 52,750 sleeping mats, 68,221 blankets 9,807 family hygiene kits, 5,039 baby hygiene kits and 8,167 diapers have been distributed since the start of the emergency, along with essential household goods. Demand is overwhelming, with shelters being swamped with an increase of over 10,000 IDPs every day from 18 to 22 July.

UNRWA is working with partners to improve access to drinking water in shelters, which are being overwhelmed by massive numbers of displaced. Non- potable water is usually pumped to UNRWA Schools by Municipalities, who are facing challenges including damage to pipes and inaccessibility of pumps located in areas of heavy fighting. UNRWA is therefore tanking non potable water to shelters. Despite these efforts, there remains critical shortage of water for drinking and hygiene.

While responding to the urgent needs of displaced Gazans, UNRWA has also continued its regular operations as much as security has allowed.

UNRWA health services have continued operating since the start of the crisis, providing primary health care- including child and maternal health care and Non Communicable Disease (NCD) care- to 104,493 patients since 9 July; in addition to dental care. In shelters that are not located near an UNRWA Health Centre, health focal points have been put in place (in place in 15 shelters as at 22 July).

UNRWA sanitation workers have continued to collect solid waste from refugee camps and shelters in Gaza throughout the current conflict. The commitment of UNRWA sanitation laborers to maintaining standards of environmental health is commendable, as UNRWA sanitation services continue to face challenges in accessing some areas due to heavy fighting.

Since the current emergency started, 84 UNRWA installations have sustained damage. This includes mainly schools and health centers, in addition to a water pump, the Rehabilitation Centre for the Visually Impaired and warehouses containing vital stock for UNRWA operations. Of particular concern is the attack against an UNRWA School in Maghazi, as reported on 22 July. 1.2 million refugees in Gaza rely on the services provided through UNRWA infrastructure and any damage to installations therefore has a significant impact on UNRWA’s ability to continue providing much- needed essential services to an already vulnerable population.

The impacts of the current escalation in violence have been particularly severe for children. A six year old child in Gaza today is currently experiencing their third conflict, with major impacts on psychosocial well being. The United Nations Office for Coordination of Humanitarian Affairs (OCHA) reports that 72,000 children need immediate psychosocial support to cope with the trauma of having lost family members or friends, having a home destroyed, being displaced, and experiencing the constant fear of shelling. Children have made up more than 22% of all Palestinian fatalities, with 147 killed since the emergency was declared (100 boys and 47 girls). OCHA latest situation report states that over the past two days, one child has been killed every hour.

Complementing support provided by UNRWA, the local community has also provided support to UNRWA shelters, highlighting the generosity of the community in Gaza, even at times of great hardship. Since the emergency was declared, local community organizations have donated 43,405 food parcels, 1,335 cans of baby milk formula, 174,157 liters of water and other items including diapers, soap and household goods.

On 22 July, the Secretary-General, Ban Ki-Moon briefed the UN Security Council on the situation in Gaza with a three part message- “First, stop the fighting. Second, start the dialogue. Third, tackle the root causes”. The Secretary- General’s message again stressed the need both for an immediate ceasefire and a resolution of deeper issues.

Speaking to the UN Security Council, the Secretary- General recognized the efforts of UNRWA staff, praising UNRWA for “courageously assisting the people of Gaza under such difficult circumstances”. UNRWA echoes this praise for its staff, who continue to tirelessly serve the population in Gaza while coping with the impacts of conflict on themselves and their families.

Reportedly there were 111 rockets and 35 mortar shells fired towards Israel. There were also reports that 114 missiles were fired into Gaza in addition to 205 navy shells and 1204 tank shells. Reportedly, 34 houses were bombarded.

A total of 84 UNRWA installations have been damaged since 1 June, 2014.

In the past 24 hours, 7 UNRWA installations were damaged, including six schools in Middle Area and One School in North Gaza.

On 17 July, UNRWA launched an emergency flash appeal for US$ 60 million to respond to the urgent and pressing humanitarian needs of the people of Gaza, including the thousands who have already fled their homes to seek safety in UNRWA facilities. This funding was to enable UNRWA to respond to the immediate shelter, food, health and psychosocial needs of internally displaced persons (IDPs), while replenishing emergency supplies and preparing for vital interventions necessary after a cessation of military activities. The emergency response phase was expected to last for one month, and the early recovery a further three to six months.

More information on the appeal can be found by here.

Based on the escalating number of IDPs and further destruction of shelters, a revised appeal was released on 22 July, for an additional US$ 55 million.  UNRWA now estimates that US$ 115 million is needed to provide emergency assistance to 150,000 people through its shelters- where food, NFI and psychosocial support are provided- and through health and social service facilities available to those not taking refuge in UNRWA shelters. This funding will also allow UNRWA to start early recovery activities once hostilities cease.