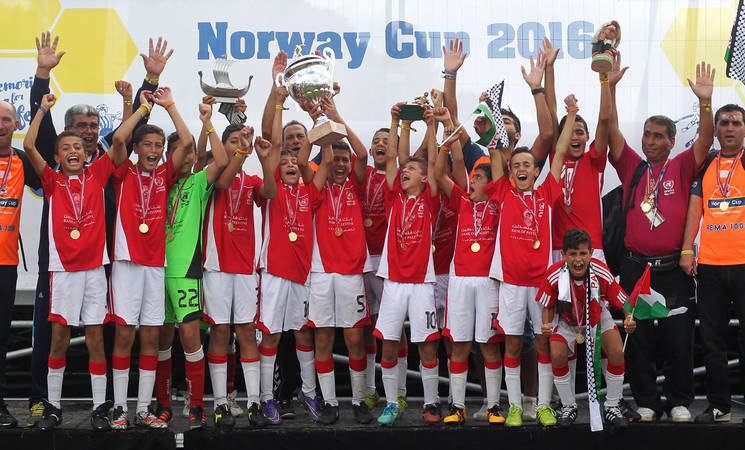 The UNRWA Gaza football team has won the 2016 international Norway Football Cup. This year 2,199 teams from over 50 countries participated in the tournament. The tournament in Norway is an annual event; the Gaza team has been a steady participant since 2010 with the exception of 2014 due to the 2014 summer conflict. Last year - as well as in 2012 - the team won the competition and were awarded a prize. To win the trophy again is the crowning glory of the football team’s Scandinavian tour, traveling also to Sweden and Denmark to participate in the Gothia Cup and Dana Cup. According to the United Nations Office on Sport for Development and Peace (UNOSDP), participating in sports enhances children’s life skills, including team work, working hard, showing respect, accepting losses and standing by each other, while providing them with a safe space for recreational activities and opportunities to participate in a cultural exchange and create new friendships. The UNRWA Gaza refugee football initiative is generously supported by local Palestinian businesses and UNRWA. In addition, a pitch (oval) in central Gaza to train and exercise during the weeks leading up to the tournaments was provided at no cost by the local community.

Two UNRWA student parliament members participated in the annual Children as Actors for Transforming Society Conference (CATS) from 26 July until 1 August at the Caux Palace Switzerland. This year the focus was on how children and young people can contribute to furthering the Sustainable Development Goals (SDGs). It provided a forum to show what children are capable of achieving; children’s fundamental human right to participate in transforming society and realizing their unique potential. Razan Al Dabous, President of the UNRWA Gaza Central Student Parliament, and Ahmed Al Madhoun, Vice-President, participated in the conference, which provided a space where children, young people and adults from all over the world could work together in mutual respect towards creating a better society. The Gaza Central Student Parliament of UNRWA schools consists of 15 representatives, boys and girls, from UNRWA preparatory and elementary schools. In total, there are five Area Student Parliaments and 241 School Parliaments in UNRWA schools in Gaza. School Parliaments in Gaza are responsible for raising the concerns, suggestions and problems of students to the School Principal, teachers, parents’ councils and the overall UNRWA education team. They actively promote human rights concepts through school radio programmes or school magazines, the organizing of events or visits to civil society and human rights organizations. They also teach children civil and social skills, including leadership, participation, decision-making and communication. The school parliament students were elected by their classmates in an organized election process, which was held last October. The electoral process helps students understand the values needed for practicing elections, such as forgiveness, conflict resolution, dialogue and self-confidence.

From 7 to 14 August the UNRWA Relief and Social Services Programme (RSSP) in Gaza organized recreational activities for 1,000 vulnerable children who have lost their fathers during the 2014 conflict. The children went to Sharm Park Resort in Gaza City to relax and have fun. It is part of the project ‘Intervention to Support Children Orphaned during 2014 Hostilities’ which started in July 2015 and is expected to end in December 2016. Other activities in the same project are cash assistance, provision of clothes, awareness sessions and vocational training. Overall, UNRWA supports approximately 8,000 vulnerable children who lost their fathers through various activities, including psycho-social support, legal consultation for the mothers, educational assistance through private education centres, and material support such as stationery and clothes.

UNRWA Summer Fun Weeks (SFWs) in Gaza continued to provide children in Gaza with a safe place to play and have fun, during the reporting week. As part of this year’s activities, the Agency partnered with the private sector and other UN agencies like, the UN Children’s Rights and Emergency Relief Organization (UNICEF) to help raise 165,000 Palestine refugee children’s awareness of the challenges related to shortage of clean, potable water in the Gaza Strip. The awareness campaign encourages children to use and conserve desalinated water. SFW animators organized sessions about safe, desalinated water and other activities including putting up posters around the theme in 120 locations across the Gaza Strip and field visits to the desalination plant. Three delegations of UNRWA student parliaments in the Middle Area, Khan Younis and Rafah visited the plant constructed by UNICEF with the Palestinian Water Authority (PWA) and Gaza’s Coastal Municipalities Water Utilities (CMWU). The plant, when fully operational, will produce 6,000 m3 of potable water daily. This will provide over 75,000 Palestinians with safe drinking water—approximately 35,000 people in Khan Younis and 40,000 people in Rafah, in southern Gaza. The Gaza Strip suffers from a very severe water and sanitation crisis; the UN already warned in 2012 that its aquifer may become unusable by 2016, with damage irreversible by 2020. Current abstraction of water from the aquifer to meet overall needs is way beyond the recharge back to the aquifer. As groundwater levels subsequently decline, sea water infiltrates from the nearby Mediterranean Sea. Moreover the aquifer gets contaminated by nitrates from uncontrolled sewage and fertilizers from irrigation of farmlands. Today, over 90 per cent of the water is unfit for human use, according to the UN Gaza 2020 report. Seawater desalination, one of the strategic options to help provide 1.8 million Palestinians in Gaza with safe drinking water, is essential to curb over-extraction of groundwater from the coastal aquifer, and to prevent an environmental disaster.

For 13 days, from 21 July until 4 August, UNRWA Gaza Training Centre hosted 300 Palestine refugee children between the ages of 10 and 15 at ‘Camp Discovery’, an enriching summer camp organized by America-MidEast Educational Training Services (AMIDEAST) in partnership with UNRWA. The camp aims to give boys and girls from refugee camps the opportunity to improve their English language skills and stimulates their self-confidence through team-building and leadership development activities. The children participated in activities focusing on English language skills, scientific discovery and artistic expression. At the end of the camp parents were invited to see the result of their children’s activities during the closing ceremony. AMIDEAST is committed to strengthening Palestinian human resources and institutions through expanded education and training services, technical assistance, and scholarship and grant programmes.

In July, UNRWA completed the reconstruction of Khan Younis Preparatory Girls A and Mustafa Hafez Elementary Co-Ed schools. Both buildings are A-type schools, will operate on a one-shift basis and will accommodate a total of 978 and 891 students respectively. Forty-five infrastructure projects worth US$ 82.1 million, including two components of an infrastructure project implemented in all camps in the Gaza Strip, are under implementation. At present, the total value of UNRWA projects approved by the Coordinator of Government Activities in the Territories (COGAT) is US$ 232.8 million. However, project approval does not imply approval of the materials required to complete the project. Four projects entered the coordination phase (i.e. the phase during which UNRWA begins import of materials to Gaza for a given project in July). For more information please consult the attached July 2016 UNRWA Construction Update.

On 23 July 2016, UNRWA launched its Summer Fun Weeks (SFWs) Programme. For three weeks, almost 165,000 registered Palestine refugee children are being given the chance to participate in different activities such as football, drawing, playing games and handicraft workshops including recycling.

Summer Fun Weeks provide temporary job opportunities to over 2,300 people for mostly young unemployed Palestine refugees at a time when 60 per cent of the youth in Gaza are unemployed and overall unemployment is above 40%. It’s also a chance to boost local markets; through purchasing from Gaza suppliers to support students participating in SFWs activities.

The initiative is also conscious of environmental issues. Waste materials such as plastic bottles, tires, ropes and sponges available at the UNRWA Karni warehouse are re-used for recycling workshops at over 120 different locations hosting SFWs across Gaza.

Ms. Michèle Vanvlasselaer is a visiting Belgian artist who is experienced in working with glass and light. Through the theme of recycling, she volunteered her time to share her experience in this field with the children participating in the SFWs. She helped them to produce beautiful pieces of art out of the interplay between transparent plastic materials and light. Each piece of art will represent a small scene.

“I want to stimulate the imagination of young people by letting them play with light and their creativity by using unusual materials, that we would normally throw away,” Ms. Vanvlasselaer said.

The students in the SFWs will participate in recycling workshops with the artist to play and share fun as well as helping to keep the environment clean.

Israa Al Halabi, a student in seventh grade participating in SFWs, said: “I participated in different activities, but I found the recycling workshop very interesting. I never imagined I could make beautiful handicrafts from things that I thought are rubbish”.

The best works created during the Summer Fun Weeks will be selected to travel to Belgium. In autumn, young people in Brussels will participate in the same type of art workshop as in Gaza. Following this, a joint exhibition including both the artworks of children and youth in Gaza and Belgium will connect the smaller scenes to each other in order to create one large story.

During the reporting week, Israeli forces fired towards Palestinian areas along the perimeter fence and towards Palestinian boats on a daily basis; a total of three Palestinian people were arrested. Further, civilians, mostly youth, continued to protest near the perimeter fence expressing their eagerness to defend Al Aqsa Mosque and in solidarity with Palestinians in the West Bank. When some of them approached the perimeter fence and threw stones towards Israeli observation posts, Israeli forces responded with gun fire and tear gas; five injuries were reported. Four Israeli bulldozers reportedly entered approximately 100 metres into central Gaza to conduct a clearing and excavation operation. In central Gaza a tunnel reportedly collapsed, resulting in one death. 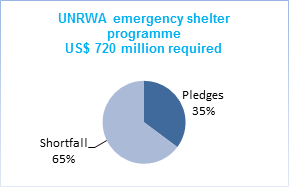