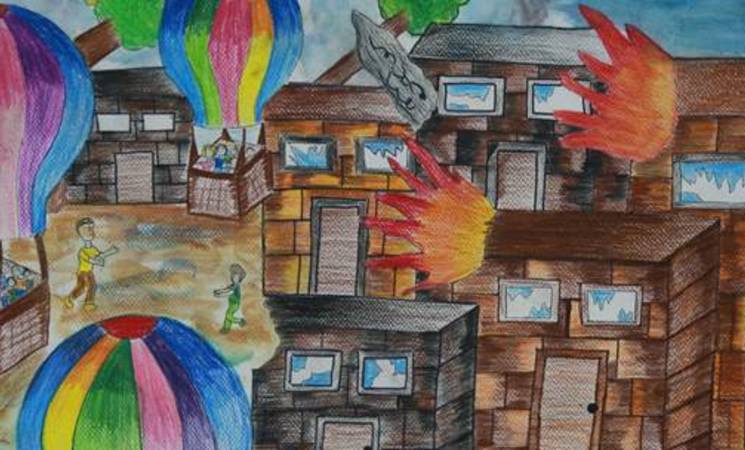 UNRWA has secured funding to reconstruct 2,000 totally destroyed homes. Funding is currently not the biggest barrier to reconstruct homes. Reconstruction has been delayed due to import restrictions for construction material as a result of the blockade, complex documentation requirements related to proving title to land, obtaining building and municipal permit, as well as funding shortages: only 40 per cent of the US$ 3.5 billion pledged for Gaza’s reconstruction has been disbursed by donors as of mid-2016. For all reconstruction, UNRWA prioritizes families based on poverty status (an excellent indicator for vulnerability in this context) and larger families, unlike other reconstruction actors in Gaza.  In order to mitigate the barriers these families face in particular, UNRWA outreach engineers assist eligible families in gathering relevant documentation. 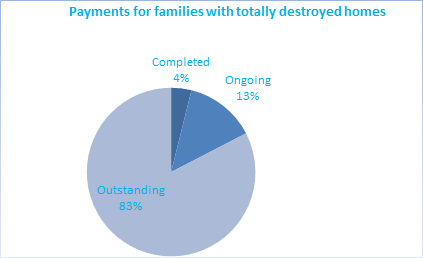 Back to school: Happiness mixed with ongoing memories of loss and destruction

UNRWA sees education as a major investment in dignity, human development and a measure of stability for Palestine refugees. The Education Programme in Gaza is UNRWA’s largest and despite the fragile situation, lack of infrastructure and financial constraints, on 28 August over 263,200 students were able to start their scholastic year 2016-2017 on time.

According to the “Gaza: two years after“ report by the United Nations Country Team in the State of Palestine, during the 2014 hostilities 252 schools were damaged while seven schools were completely destroyed in Gaza. Out of them, a total of 83 UNRWA schools were damaged as a result of the conflict, including seven schools used as designated emergency shelters for internally displaced families that were directly hit during the conflict. All damaged schools have been repaired and are fully operational, the completely-destroyed UNRWA school has been reconstructed, and work is currently ongoing on the remaining six completely destroyed schools.

For the new school year, there are around 8,530 dedicated UNRWA teachers who facilitate the education of Palestine refugee students in 267 schools in all five areas of the Gaza Strip, led by 247 school Principals and 265 Deputy School Principals.

“The children seem to feel happy to be back to school, and they feel comfortable as the building is very clean and has new furniture,” commented Mohammad Zaqout, the School Principal of the UNRWA Rimal Preparatory Boys A school, which is one of the 14 new schools UNRWA constructed in the past seven months to accommodate all the students - over 13,000 more compared to last year.

15-year old Yousef Shunbari is one of the students visiting the new UNRWA Rimal Preparatory Boys “A” school.  During the 2014 conflict, Yousef lost all his family members except one sister. He also lost his home which was totally destroyed during the hostilities. He is now living in an orphanage in Gaza city.

“I often dream about the old days, before the conflict. I wish I could go back to my old school, with my old friends. I miss them all,” Yousef said.

According to the UN, a total of 7,000 students whose homes were totally destroyed or severely damaged during the conflict faced difficulties to complete their studies as the $21 million requested to cover their expenses (e.g. transportation, stationary, school uniforms) have not been made available. Many students have been affected by the psycho-social impact of long-term or ongoing displacement and the shock of losing family, home and friends.

Also 14-year old Ala’a Siam lost his home during the hostilities, yet fortunately he did not lose his family. He is one of the 65,000 persons who remain displaced to this day, and he lives with his family in a rented home, supported by UNRWA through the payment of transitional shelter cash assistance.

“When I saw my home completely destroyed, I was shocked. I remember I saw my appreciation certificates under the rubble, and I said to myself: why should I work hard and study if everything is lost,” he commented.

Reconstruction of homes has been delayed due to import restrictions for construction material as a result of the blockade, complex documentation requirements related to proving title to land, obtaining building and municipal permit, as well as funding shortages, states the “Gaza: two years after” report.  The World Bank announced that only 40 per cent of the US$ 3.5 billion pledged for Gaza’s reconstruction has been disbursed by donors as of mid-2016. 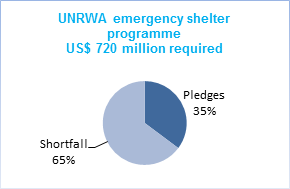