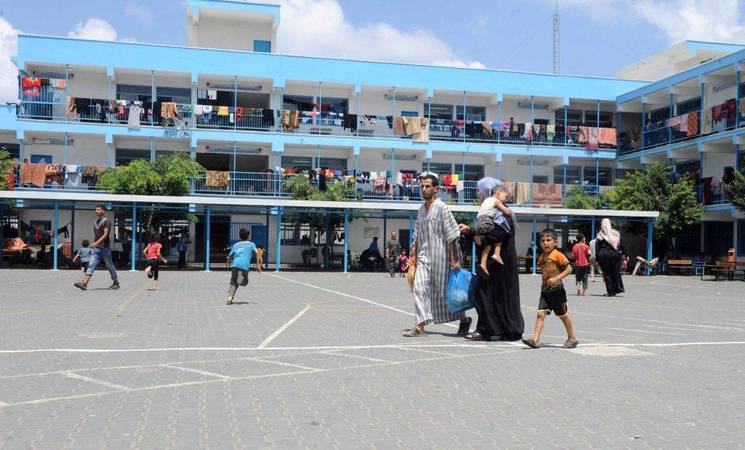 On 7 July UNRWA declared an emergency in all five areas of the Gaza Strip in response to escalating violence between Israel and Hamas. Since then, civilian displacement and fatalities have risen sharply. The total number of Palestinian deaths reported by the Protection Cluster currently stands at 756. The number of displaced people is now nearly triple the peak number from the 2008/9 conflict, and exceeds 141,338 in 83 schools. UNRWA has launched an emergency flash appeal for US$ 115 million to respond to the urgent and pressing humanitarian needs of the people of Gaza.

Past 24 hours: UNRWA shelters continue to provide refuge to large numbers of Internally Displaced People (IDPs). Amid the trauma of displacement, a number of babies have been born to mothers staying in UNRWA shelters and have all returned to the shelters to start their life as IDPs. UNRWA health teams continue to monitor the health of babies and mothers

According to the Protection Cluster, the number of Palestinians reported killed in the current escalation in violence has now reached 756. In the past 24 hour period, 100 Palestinians were reported killed, including 7 women and 17 children. According to the Ministry of Health, the total number of Palestinians reported injured since the current emergency began has risen to 4,605. With three soldiers reported to have been killed in the past 24 hours, the Israeli death toll reportedly stands at 32, including 3 civilians.

Availability of safe water is a growing concern for people in Gaza. Much of water, sanitation and hygiene (WASH) infrastructure that has been damaged during the current conflict is inaccessible as it is located in the expanded ‘buffer zone’ or in areas of heavy fighting. This has left a large percentage of the population without access to water, raising serious public health concerns. UNRWA remains ready to support repairs to vital infrastructure once assessment of priority needs has been carried out and security allows.

In its shelters, UNRWA is working to ensure access to safe drinking water for IDPs. In Gaza and North Areas, UNRWA teachers living close to shelters have been allocated as water focal points; and in Middle, Khan Younis and Rafah Areas UNRWA Sanitation staff continue to visit shelters and monitor water quality to ensure that safety standards are upheld. Water focal points in shelters have received water testing kits; and training in water testing is in process, as well as training on awareness-raising of safe water handling practices. Many UNRWA shelters remain without running water and UNRWA provides tanks of non-potable water to shelters to ensure that standards of hygiene can be maintained.

In addition to water shortages, people in Gaza are experiencing increased electricity cuts as a result of the current conflict. While electricity supply was a major issue before the current conflict, this has been exacerbated by the Gaza Power Plant being struck on 22 July. Electricity is being provided on a rolling basis and homes are left without power for approximately 20 hours per day. Electricity cuts have major impacts on the life of Gazans. These cuts prevent households from being able to pump water to storage tanks; pose risks to safe storage of food as refrigerators cannot function properly; and impact communications as internet access is cut and mobile phones cannot be charged. The psychological impact of being without light and means of communication while conflict is ongoing cannot be overestimated.

While responding to the current emergency, UNRWA also yesterday launched its regular emergency food distribution cycle in nine out of twelve Distribution Centers across the Gaza Strip. Three Distribution Centers were closed due to heavy fighting. Over 830,000 refugees receive food from UNRWA, approximately half the total population in Gaza, highlighting the severe economic deprivation experienced in Gaza even before the current escalation in conflict.

Reflecting the strong sense of solidarity in Palestinian communities, a group of 80 youth have launched an initiative in Rafah to clean eight UNRWA shelters, with support from IDPs. Shelters also continue to receive in-kind donations of food and other essential supplies from local community organizations, including from a 7-year old boy who donated his savings to assist IDPs in a local UNRWA shelter. These efforts demonstrate the generosity of the human spirit that survives in Palestinian communities even during times of great hardship.

International pressure continues to mount for a resolution to the conflict. Speaking at the 21st Special Session of the Human Rights Council in Geneva on 23 July, Navi Pillay, UN High Commissioner for Human Rights reiterated that civilians must not be targeted, highlighting UN figures that 74% of those killed so far were civilians. Speaking on behalf of UNRWA, Lance Bartholomeusz echoed the call for respect for international law and protection of civilians as well as addressing the root causes of the conflict. Following the Special Session, the Human Rights Council voted for establishing an independent, international commission of enquiry to investigate all violations of international humanitarian law and human rights law in the occupied Palestinian territory, particularly in the Gaza Strip.

Reportedly there were 127 rockets and 45 mortar shells fired towards Israel. There were also reports that 145 missiles were fired into Gaza in addition to 305 navy shells and 907 tank shells. Reportedly, 48 houses were bombarded.

It is with the deepest regret that UNRWA has lost a third dedicated staff member, who was killed during this period.

A total of 84 UNRWA installations have been damaged since 1 June, 2014.

In the past 24 hours, three UNRWA installations were damaged, including two schools and one health centre.

On 17 July, UNRWA launched an emergency flash appeal for US$ 60 million to respond to the urgent and pressing humanitarian needs of the people of Gaza, including the thousands who have already fled their homes to seek safety in UNRWA facilities. This funding was to enable UNRWA to respond to the immediate shelter, food, health and psychosocial needs of internally displaced persons (IDPs), while replenishing emergency supplies and preparing for vital interventions necessary after a cessation of military activities. The emergency response phase was expected to last for one month, and the early recovery a further three to six months.

More information on the appeal can be found by here.

Based on the escalating number of IDPs and further destruction of shelters, a revised appeal was released on 22 July, for an additional US$ 55 million.  UNRWA now estimates that US$ 115 million is needed to provide emergency assistance to 150,000 people through its shelters- where food, NFI and psychosocial support are provided- and through health and social service facilities available to those not taking refuge in UNRWA shelters. This funding will also allow UNRWA to start early recovery activities once hostilities cease.