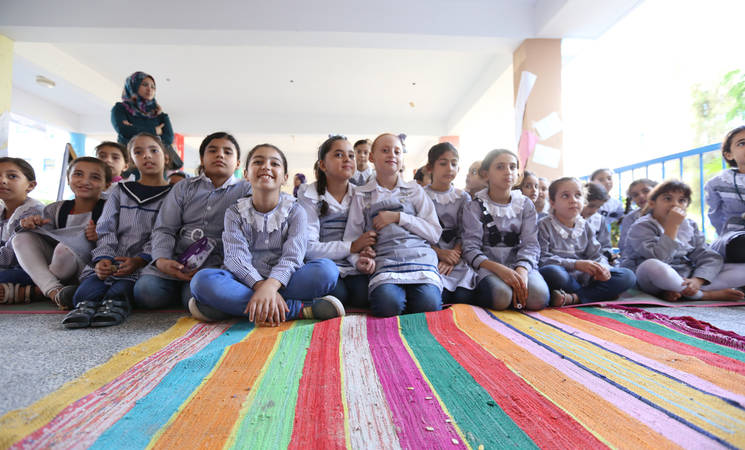 UNRWA was able to disburse over US$ 1.46 million for reconstruction (~US$ 1 million) and severe repair works (~US$ 464,200). The funds reached a total of 299 refugee families across Gaza; they were able to access their assistance this week.

UNRWA has secured funding to reconstruct 1,900 totally destroyed homes. Residential reconstruction has been delayed due to initial delays in agreeing a formula to import construction materials under the Gaza Reconstruction Mechanism, complex documentation requirements related to proving title to land, obtaining building and municipal permit, as well as funding shortages in the longer term. For all reconstruction, UNRWA prioritizes families based on poverty status (an excellent indicator for vulnerability in this context) and larger families, unlike other reconstruction actors in Gaza.  In order to mitigate the barriers these families face in particular, UNRWA outreach engineers assist eligible families in gathering relevant documentation.

Civilians, mostly youth, continued to protest near the perimeter fence expressing their eagerness to defend Al Aqsa Mosque and in solidarity with Palestinians in the West Bank. When some of them approached the perimeter fence and threw stones towards Israeli observation posts, Israeli forces responded with gun fire and teargas. Three persons were injured.

A Palestinian merchant was arrested by Israeli forces at Erez crossing. A 15-year old Palestinian male was seriously injured and admitted to the hospital after being hit by a stray bullet from an unknown source while he was on the rooftop of his house in Khan Younis, southern Gaza.

The summer 2014 hostilities had a devastating psychosocial impact on individuals and communities in Gaza, adding to the effect already felt from almost ten years of blockade and recurrent conflict. The shock of losing a home and family members and returning to neighbourhoods to find them destroyed can contribute to eroding any sense of certainty and hope in the future. The unprecedented human, social and physical devastation during the 2014 conflict had a particular impact on children and many are still in need of psycho-social support. According to the UNRWA Community Mental Health Programme (CMHP), children exposed to violence often express a loss of trust in others. Other common symptoms are eating disorders, nightmares or intense fear.

35-year-old Rola Al Hindi has been working as counsellor in Al Amal Preparatory Girls school in southern Gaza for over elven years. “When I think about how many children I helped face their fears, and to learn how to deal with them, I feel proud,” Rola said.

CMHP counsellors play a critical role in supporting Palestine refugees of all ages. The CMHP currently maintains a network of almost 280 counsellors and 80 psychosocial facilitators in UNRWA schools supported by a team of supervisors and assistant supervisors, as well as a Senior Mental Health Psycho-Social Support (MHPSS) Specialist. The programme also employs 23 counsellors and 5 legal advisors at health centres across Gaza. They collectively support children and adults not only through individual and group counselling, but targeted interventions aimed at enhancing psychosocial resiliency and well-being.

“I use many different tools such as games, drawing, singing, drama or videos to help students manage their stress and memories. I really love to work in schools as here I feel I can really reach the children; I also work closely together with their parents as many of the students’ problems can only be addressed by involving the parents,”  Rola commented.

“I really like the school counselling activities; they even make me like school better. I think because of them, I am now braver,” explained 12-year old Raghda Al Qedra, one of the students in Al Amal school.

Over the past years, the UNRWA Community Mental Health Programme (CMHP) has moved towards the Mental Health Psycho-Social Support (MHPSS) model to provide a more holistic and integrated approach that extends beyond counselling. Counsellors help ensure that the children of Gaza are equipped with the life skills to succeed in life, working closely with teachers to reinforce problem-solving, interpersonal relationships, support for their peers, respect and tolerance for others, and self-care and stress management. In UNRWA health centres, CMHP psychosocial and legal counsellors provide comprehensive support to mainly women, many of whom have experienced Gender-Base Violence (GBV), through individual counselling, group support, and relevant legal advice.