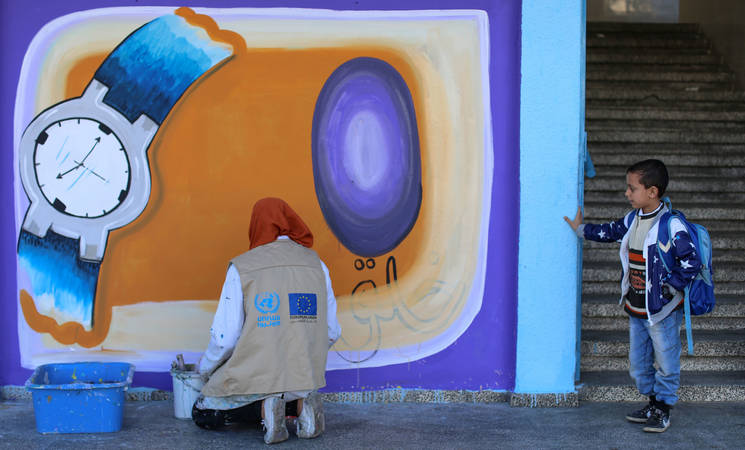 A comprehensive shelter update will be provided in the next Gaza situation report.

Various other protests were held during the week, for example in solidarity with Palestinian prisoners in Israeli jails or by beneficiaries to demand job opportunities from UNRWA.

During the week under review, Israeli forces fired towards Palestinian areas along the perimeter fence and towards Palestinian boats on a daily basis. Four Israeli bulldozers entered approximately 50 metres into Gaza to conduct a clearing and excavation operation. They withdrew on the same day.

A 19-year old bystander was accidentally killed during a police hunt in central Gaza. The bystander was a Palestine refugee. Several fires broke out during the week in a residential area due to short circuits. Several apartments and houses, as well as a shop, sustained severe damages and ten injuries were reported. A militant was killed and another injured as a result of an explosion during a military training. 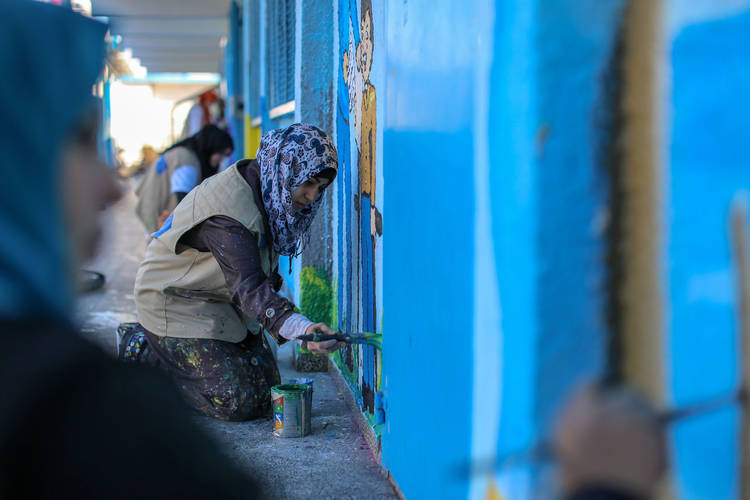 Artist Eman Abu Saqqer is drawing on the walls of the UNRWA Preparatory Boys School in Gaza. © 2016 UNRWA Photo by Rushdi Al Sarraj

To encourage community engagement and as a means to spread positive messages, colour and life among students and people in Gaza, over the past year approximately 140 young Palestinian artists have painted the outside walls of 270 UNRWA installations across Gaza. While they finished the outer walls last summer, in September the artists also started painting 65 schools from inside, a project planned to be finished by the end of this month.

“I graduated in art six years ago and it has been hard to find an opportunity in Gaza to practice my skills, not only because of the difficult economic situation, but also because there is not much interest in art in Gaza’s society. I am thus very content to be part of this UNRWA project, which transforms grey walls into colourful murals,” commented Palestine refugee Mahmou Al Otol, one of the young artists who participates in the project.

All the artists are hired through the Agency’s Job Creation Programme, which provides short-term employment opportunities for youth whilst also beautifying Gaza’s streets and adding colour to everyday life.

“The drawings we put on the murals include educational and moral messages; when the students look at them they will not only enjoy the image, but also learn something,” explained Eman Abu Saqqer, another refugee artist who participates in the project.

The mural-drawing activity was a joint project between the Maintenance Division of the UNRWA Infrastructure and Camp Improvement Programme (ICIP) and the Education Programme, under the facilitation of the UNRWA Operations Support Office. In addition to visually improving UNRWA facilities, the drawings also contribute to the installation’s neutrality. A short film on the activity – titled ‘Colours for Gaza’ and produced by UNRWA TV - can be viewed here.

UNRWA is confronted with an increased demand for services resulting from a growth in the number of registered Palestine refugees, the extent of their vulnerability and their deepening poverty. UNRWA is funded almost entirely by voluntary contributions and financial support has been outpaced by the growth in needs. As a result, the UNRWA Programme Budget, which supports the delivery of core essential services, operates with a large shortfall, projected for 2016 to stand at US$ 37 million. UNRWA encourages all Member States to work collectively to exert all possible efforts to fully fund the Agency’s Programme Budget. UNRWA emergency programmes and key projects, also operating with large shortfalls, are funded through separate funding portals.