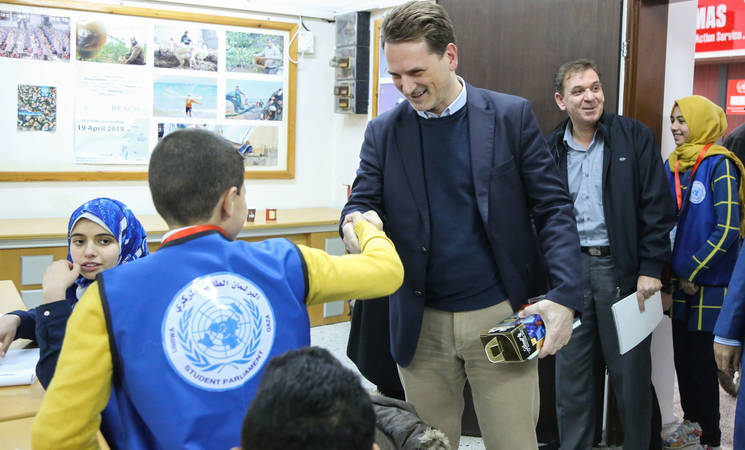 Various protests were held during the week, predominantly in solidarity with Palestinian prisoners in Israeli jails; a sit-in was staged by a few dozen former UNRWA personnel, demanding fix-term contracts.

On 24 January, a beneficiary attempted to burn himself in front of the UNRWA Tuffah Distribution Centre in Gaza city; UNRWA staff members intervened and prevented him from harm.

Eight Israeli bulldozers entered Gaza on two different occasions to conduct a clearing and excavation operation; they withdrew on the same day.

Strong winds and rain resulted in the damage (mostly through the partial or full collapse of the roof) of 12 residential houses and one sports club across Gaza; seven injuries were reported. The outbreak of fire in two different houses, one due to a short circuit and the other due to the explosion of a gas cylinder, led to four further injuries and damage to the houses.

Five Palestinian men were arrested by Israeli troops on four different occasions after they attempted to enter Israel through the perimeter fence. A 27-year old Palestinian was found dead inside a pool in a private chalet. The background of the incident remains unclear. During a family dispute fire arms were used and one person was injured.  Further, a passer-by was injured by gunshots exchanged during clashes between the police and a criminal. Unknown persons detonated an Improvised Explosive Device (IED) on front of a Fatah leader’s house; the house sustained damage. Lastly, two Palestinian men were injured as they accidently set off a hand grenade.

Mitigating the impact of the Gaza electricity crisis: UNRWA installs solar panels on its premises 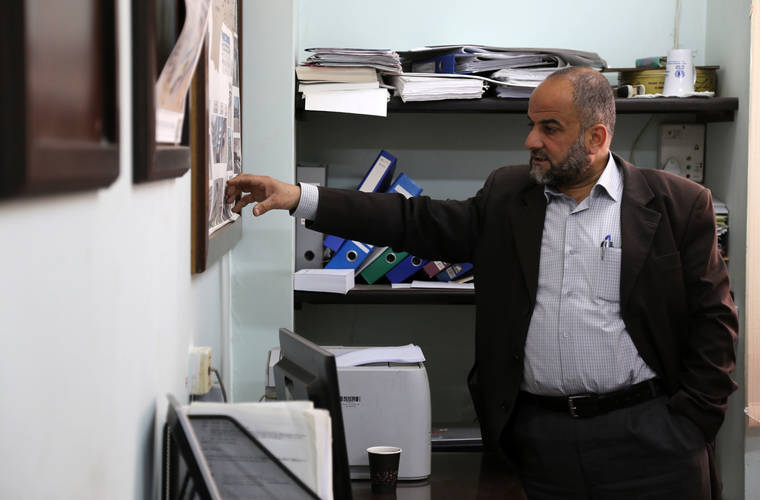 Ayman Al-Roubi from the UNRWA Infrastructure and Camp Improvement Programme, explains which UNRWA installations are, or will be, furnished with solar panels. © 2017 UNRWA Photo by Rushdi Al-Saraj

Due to the continued blockade on Gaza, which entered its tenth year in mid-2016, the tiny coastal enclave suffers from a chronic electricity and fuel crisis. The people of Gaza usually receive only between six and eight hours of electricity per day, and since the beginning of 2017, this rate dropped to only around three hours per day. This is amidst cold winter temperatures, as stated in a new report from the Israeli organization Gisha, titled “Hand on the switch.”

The report states that on a good day, Gaza’s electrical grid supplies 208 megawatts (MW), of which 120 MW are sold and supplied by Israel, 60 MW are produced by the local power plant (if enough fuel comes in from Israel, that is; the plant needs 350-360,000 litres of diesel daily to produce this amount), and 28 MW more are sold by Egypt. This supply falls far below demand, which is currently 350 to 450 MW. The lack of supply affects not only individuals, but also the overall civilian infrastructure, such as health and education services.

To reduce the pressure and reliance on Gaza’s electricity grid, decrease the negative impact of the use of fuel on the environment (through the use of back-up generators), and to seek a durable and sustainable solution to the energy crisis, UNRWA has started to look into alternative energy sources.

“UNRWA in Gaza operates and manages over 250 installations, including schools, health centres, distributions centres and warehouses, and so we need and consume a big amount of electricity on a daily basis. Alternative energy sources are becoming more and more important to us,” explained Ayman Al-Roubi, the assistant head of the construction division in the UNRWA Infrastructure and Camp Improvement Programme (ICIP).

UNRWA started to install solar energy systems - planned as back-up energy resources - in its installations in 2015. Currently 80 schools and three Health Centres are furnished with solar panels, and under its emergency preparedness project, the Agency is installing solar energy systems in 50 additional schools planned to function as Designated Emergency Shelters. After completing the works in these 50 schools, the percentage of UNRWA installations equipped with solar panels will reach 30 per cent. If funding will be available, UNRWA plans to install solar systems in all of its premises in the coming years.

While sunlight is abundant and widely available in the Gaza Strip, the production of renewable energy has been limited by Israeli import restrictions of so called ‘dual use’ items which also include solar panels and batteries that would allow storing energy, as Gisha reports. As humanitarian organization UNRWA can import this equipment through negotiated agreements with the Coordinator of Government Activities in the Territories (COGAT). Another obstacle for a wider use are high prices associated with solar panels and batteries; in addition, as the report states further, Israel’s control over the Gaza crossings also means dependence on it for shipping equipment out for repairs, having experts come in to do repairs or provide training, and travel by engineers and others from Gaza to attend meetings and seminars to acquire the relevant expertise.

“Initially, installing solar panels created some challenges for us, since our staff was not experienced in the works with solar panels, and our installations were not designed to function with solar energy,” confirmed Ayman the Gisha report’s findings.

Yet the Agency quickly adapted to the new system and adjusted its installations to receive solar panels, for example through additional works on the roofs, the building of battery rooms or by adjusting electricity and water networks.

Moreover, two UNRWA electrical engineers were able to receive an Israeli permit to leave Gaza and participate in advanced training in PV (photovoltaic system) technology in Japan, provided by the Japan International Cooperation Agency; upon their return, they built the capacity of an additional 13 engineers in the Agency.

“To spread our knowledge even wider and build the capacity of the community, our engineers are also regularly coaching members from the Gaza private sector,” confirmed Ayman.

The Gaza portion of the Emergency Appeal amounts to US$ 355 million for 2017, to address protracted, large scale humanitarian needs. Read the UNRWA oPt emergency appeal for 2017.