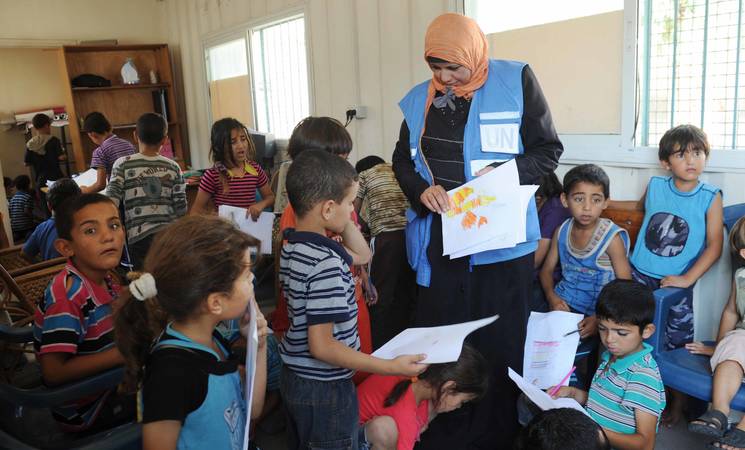 On 7 July UNRWA declared an emergency in all five areas of the Gaza Strip in response to escalating violence between Israel and Hamas. Since then, civilian displacement and fatalities have risen sharply. According to the Protection Cluster, 68 Palestinians have been reported killed during this period, including 10 women and 13 children. The total number of Palestinian deaths reported by the Protection Cluster currently stands at 907 and the number of wounded, as reported by the Ministry of Health has reached 5,860. The number of displaced people is now more than triple the peak number from the 2008/9 conflict, and exceeds 162,862 in 83 schools. UNRWA has launched an emergency flash appeal for US$ 115 million to respond to the urgent and pressing humanitarian needs of the people of Gaza.

Past 24 hours: Numbers of Internally Displaced people (IDPs) in UNRWA shelters continue to increase, now exceeding 162,862. In addition, an estimated 20,000 IDPs are reported to be sheltering with relatives and in public schools, mosques, churches, unfinished buildings and open areas. After more than two weeks of escalating conflict, some areas are reporting that families hosting IDPs in their homes are no longer able to support displaced family members, leading to some increase in numbers seeking refuge in UNRWA shelters. Besides providing food and essential non- food items in its shelters, UNRWA is also making efforts to address other needs of displaced people. Psychosocial counselors are in place in shelters to support people, especially children, in coping with their experiences of fear and loss. In Rafah, a group of four volunteer barbers is visiting UNRWA shelters to offer haircuts, helping to bring some sense of normalcy amid the trauma of displacement.

Babies continue to be born to women staying in UNRWA shelters, with mother and child then returning to the difficult circumstances in shelters, in the absence of any other safe place in Gaza. These women have expressed their wish for an end to the conflict and to be able to return to their homes. UNFPA has expressed concern about the impact of the conflict on women’s health and their access to safe births, with an estimated 45,000 women pregnant women in Gaza in need of maternity care and an estimated 5,000 of these displaced by the current conflict. OCHA reports a rise in the numbers of child mortalities, miscarriages and premature births among pregnant women.  Access to maternal health services is increasingly limited in the face of attacks against health facilities and increased pressure on services. Overnight, there were reports of heavy shelling at Beit Hanoun hospital, and it has been reported that six out of thirteen hospitals in Gaza have now been severely damaged during this conflict. In addition, WHO has previously reported critical concerns with hospital supplies due to large numbers of casualties and serious shortages even before the current conflict.

One of the most serious concerns in UNRWA shelters remains that of access to water. During this period, UNRWA continued to install additional tanks in schools being used as shelters, in order to improve storage capacity. However, delivery of water across the Gaza Strip remains a challenge due to limited capacity. UNRWA is also continuing to put in place a system of shelter focal points to monitor water quality and safe usage, in an effort to minimize the risk of water- borne diseases. With many UNRWA shelters housing more than 2000 people, maintaining standards of hygiene is of particular importance in order to avoid major public health concerns.

Overnight, parties to the conflict agreed to the implementation of a twelve hour humanitarian pause, starting from 08.00 local time. UNRWA hopes that this pause will be upheld in order to allow the Agency to provide much needed humanitarian assistance to previously unreachable areas. While regular food distribution and sanitation services were not provided during this period due to it being a Friday, high levels of insecurity and an expanded 3km Israeli- imposed ‘buffer zone’ have been preventing solid waste removal in Maghazi and Bureij; access to an UNRWA warehouse containing vital food and NFI supplies in the north of the Gaza Strip; access to two NFI stores; operation of four centers for regular distribution of emergency food; and provision of water to a shelter in Maghazi. Humanitarian pauses are essential for the delivery of humanitarian assistance and repair of vital infrastructure as well as to complete search and rescue operations, but efforts to negotiate such pauses have been largely unsuccessful to date.

Reportedly there were 80 rockets and 28 mortar shells fired towards Israel. There were also reports that 98 missiles were fired into Gaza in addition to 90 navy shells and 989 tank shells. Reportedly, 35 houses were bombardedd.

A total of 93 UNRWA installations have been damaged since 1 June, 2014, many of them on multiple occasions.

In the past 24 hours, one UNRWA School was damaged.

UNRWA has launched an emergency flash appeal for US$ 115 million to provide emergency assistance to 150,000 people through its shelters- where food, NFI and psychosocial support are provided- and through health and social service facilities available to those not taking refuge in UNRWA shelters. This funding will also allow UNRWA to start early recovery activities once hostilities cease.