The Israeli military operation "Pillar of Defense" has entered its fifth calendar day. Israeli airstrikes have been ongoing during the past 24 hours, supported by the Israeli navy during the night. Main targets have been governmental buildings, the security apparatus, and media offices, most of them in highly-populated areas.

The population is talking about the worst night since the beginning of the Israeli military operation. Heavy explosions from airstrikes and naval fire have left the civilian population of Gaza terrified and in fear. Families are not able to hide death and destruction from their children. Still traumatised from the last military operation in 2008/2009, the young generation of Gaza will be severely affected by this additional trauma. The Israel Defense Forces are ready for a ground operation. UNRWA is prepared should the humanitarian need dictate a response. 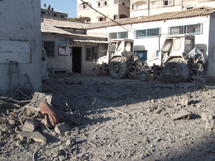 Last night, there was a lull in rocket firing for a few hours after midnight. Militants resumed their activities thereafter, even if the number of rockets fired had decreased compared to the first days of the escalation. Again rockets have been fired into the suburbs of Tel Aviv.

Streets in Gaza have been deserted today. The ongoing airstrikes make every movement extremely dangerous; people do not leave their homes unless absolutely necessary.

Only a few food stores and the vegetable markets and bakeries were open. However, it seems that most of the food stores were almost empty of customers.

Prices remained unchanged since yesterday, but the fear of shortages remains, should the situation deteriorate or last.

Activities at the tunnels have been very low. Fuel is still coming in, but in smaller amounts compared to what entered before the beginning of the Israeli military operation. Traders are in general very reluctant to work in the area that has become a frequent target of the Israeli airstrikes.

Fuel stations are opening when electricity is available. Armed guards make sure that customers don‘t buy more than urgently needed for private use.

Electricity and water shortages have been reported in some areas as a consequence of damages caused by Israel Air Force shelling. Repair works are ongoing.

Displaced families are still finding temporary solutions with friends and relatives. UNRWA is ready – should need be – to open up schools as shelters.

For the second consecutive day, UNRWA students in Gaza stayed at home. Parents have reported that children are displaying signs of stress, including excessive crying, bedwetting, and screaming when hearing frequent explosions. UNRWA TV continues to provide children with maths, Arabic, and English lessons as well as information to all UNRWA staff and beneficiaries in Gaza.

UNRWA’s shelter and emergency teams have been formed in each area, and – if necessary – are ready to assist a displaced population.

Today, 19 out of our 21 health centres were open, providing a range of services to the population. Two health centres did not operate due to their location – very close to the border – one of which sustained damage during an airstrike yesterday. UNRWA will do what is possible not to put its staff at risk while continuing essential operations. However, the closure of the one of the health centres will affect a scattered population of marginalised and very poor communities in Khan Younis. UNRWA’s health centre in Jabalia also sustained damage this morning but it continued to operate. Yesterday 678 of our health staff reported to the health centres and treated more than 9,500 patients throughout the day. 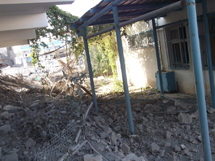 UNRWA opened seven distribution centres across Gaza today, distributing food assistance to more than 12,000 beneficiaries. One UNRWA distribution centre which was scheduled to distribute food assistance to more than 3500 beneficiaries was severely damaged as a result of an Israeli airstrike to the adjacent building, a police station. An UNRWA maintenance team has repaired the main gate and doors of the installation to prepare for distribution tomorrow, if the security situation permits.

Today, four UNRWA distribution centres were closed. UNRWA is currently assessing the security situation and will open the remaining distribution centres should the situation permit. UNRWA and its staff continue to do everything possible to ensure that the poorest of refugees receive a replenished amount of food as scheduled.

Current food distribution is part of the main distribution cycle (October to December). If emergency food assistance becomes necessary, the food commodities will be taken from stock for the ongoing distribution. This will require urgent funding to replace these vital supplies.

UNRWA provided solid waste collection in the eight refugee camps across Gaza to mitigate any public health concerns. Emergency landfill sites closer to the refugee camps were set up in order to ensure that UNRWA staff are not put at risk by disposing of the waste in remote landfill sites.

UNRWA continued to record the damage to its installations (see below) and is trying to assess the damage to refugee shelters and infrastructure. Although minor repairs were done to Jabalia Distribution Centre to allow for food distribution tomorrow, damage to the roof of the distribution centre will need two to three days to repair.

UNRWA is extremely proud of its staff, who are managing to provide essential services to Palestine refugees under extremely difficult conditions.

17 November at 15:50, an UNRWA teacher of Al Shouka Preparatory Boys’ School was slightly injured when a Israeli aircraft targeted a Hamas militant riding a motorcycle. Our staff member was walking home when the airstrike hit, and was injured with shrapnel in both knees; he received treatment and is recuperating. 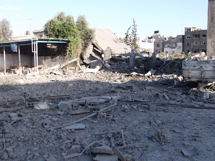