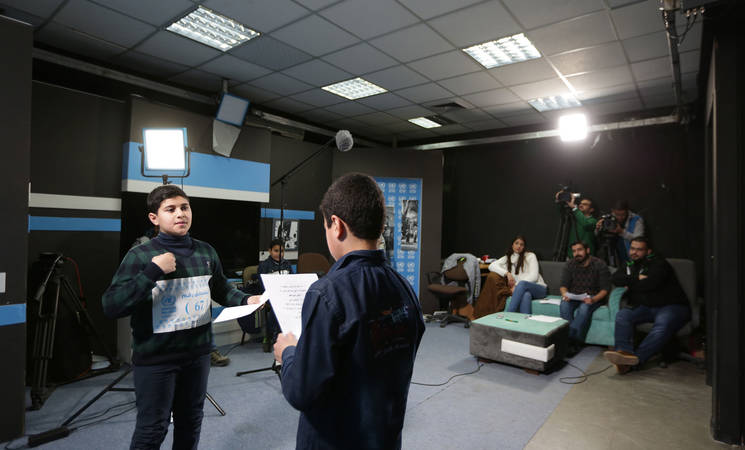 Civilians, mostly youth, staged protests near the perimeter fence in different areas of Gaza to express their eagerness to defend Al Aqsa Mosque and in solidarity with Palestinians in the West Bank. When some of them approached the fence and threw stones towards Israeli observation posts, Israeli forces responded with gunfire and teargas. No injuries were reported.

Other regular protests were held during the week, predominantly in support of Palestinian prisoners in Israeli jails.

Four Israeli bulldozers entered approximately 50 metres into Gaza to conduct a clearing and excavation operation. They withdrew on the same day. Militants fired one test rocket towards the sea. No injuries were reported.

Fire broke out in two different shops due to short circuits. The shops sustained damage but no injuries were caused. A coffee shop was set ablaze by arsonists; the shop sustained damage but no injuries were reported. The police launched an investigation.
A 20-year old Palestinian worker died and 13 others were injured (suffocation) due to a tunnel collapse in Rafah, southern Gaza. 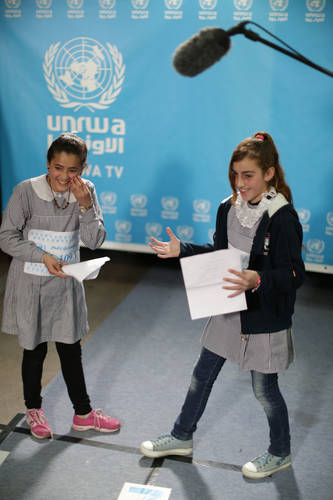 Eleven-year-old Yara Deeb (left) and 12- year old Menna Al-Khour (right) perform a play during the casting auditions in the UNRWA TV studio at the Gaza Field Office. © 2017 UNRWA Photo by Hussain Jaber
From 7 to 9 February, the UNRWA TV team, part of the Gaza Field Communications Office, conducted a casting audition for 117 students aged between 9 and 12 years old from UNRWA schools across Gaza. The auditions were to select the new team of child actors for the production of the second educational programme season on UNRWA TV. The casting auditions took place at the UNRWA TV studio in the Gaza Field Office (GFO), from which the 16 most talented and suitable students will be chosen to work alongside the TV team over the summer holidays, from June to September 2017.

“We aim to develop new, non-stereotypical forms of education by using creative and interesting teaching tools such as singing, drama, dancing and playing. The criteria to choose the children who will participate is simple: as the children are required to teach and explain the curriculum to other children they need to be strong communicators and high achievers in school; in addition, they should have some singing, dancing and acting skills,” said 30-year old Mahmoud Abu-Sal, one of the producers of the programme, which is part of the UNRWA TV education in emergencies project.

The educational season is planned to be broadcast in the next (2017/2018) school year starting in September. For this purpose, the selected students and the UNRWA TV team will produce a total of 32 innovative lessons – eight episodes for each of the core subjects English, Arabic, Mathematics and Science.

Eleven-year old Yara Deeb is one of the students auditioning and feels excited about UNRWA TV’s programmes: “I used to watch UNRWA TV and learn many things from it; I then decided that I also want to be like the children in the TV. There are limited opportunities in Gaza to practice acting, and I see UNRWA TV as my only chance. In addition, it would be an interesting hobby to fill my free time during the summer holidays.”

During the casting, the selection panel asked the children to sing a song, recite a poem, invent an imaginary story and perform a prepared play to test their acting skills, self- confidence, imagination, creativity and their ability to explain educational content to other children.

UNRWA TV was established in early 2012 as production unit and broadcaster. It broadcasts 24 hours a day, 365 days a year. Besides humanitarian communication programming, it brings innovative educational lessons to affected children in all fields. During 2016, the UNRWA TV crew, in cooperation with the Agency’s Gaza Education Programme, had developed the first season of the new educational project and for the first time applied a ‘children teaching children’ approach. In total, the team produced 24 episodes for the core subjects Arabic, English, Science and Mathematics. Promotional videos are currently broadcast on UNRWA TV and its associated YouTube channel and can be view here: Arabic, English, Mathematics and Science.