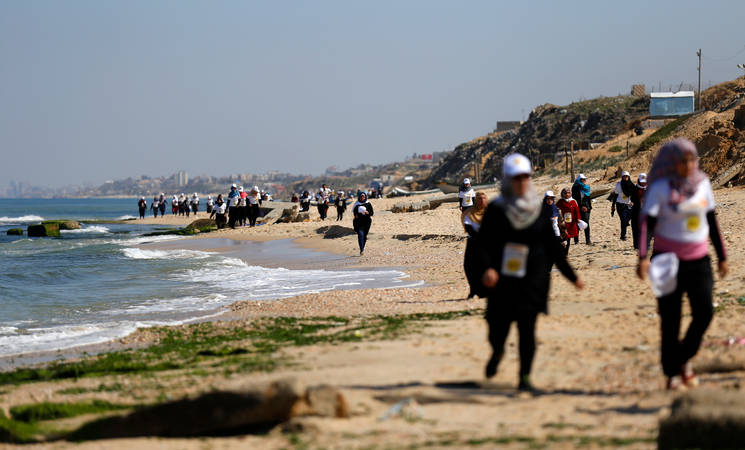 Civilians, mostly youth, staged protests near the perimeter fence in different areas of Gaza to express their eagerness to defend Al Aqsa Mosque and in solidarity with Palestinians in the West Bank. When some of them approached the fence and threw stones towards Israeli observation posts, Israeli forces responded with gunfire and teargas. One injury was reported. Other protests that took place included those in solidarity with Palestinian prisoners in Israeli jails, against the security coordination between the PA and Israel, in protest of the PA handling of the demonstration in the West Bank in support of Bassel Al Araj, on the blockade and regarding the reconstruction process.

During the reporting week, from 9-14 March, the UNRWA Local Staff Union (LSU) positioned against international staff in the UNRWA Gaza Field Office compound. International staff were able to enter the compound after working hours on each day (from 1530) and over the weekend. The Gaza Field Office Business Continuity Preparedness Plan for emergencies was implemented, and a temporary office for internationals set up offsite in Gaza city.

Militants fired one rocket towards Israel; the rocket landed in an open area inside Gaza. No injuries or were reported. Israeli forces positioned at the security fence fired tank shells on two occasions, towards the Palestinian area; no injuries were reported.

Four Palestinians, including three minors, were arrested by Israeli forces after they entered Israel through the perimeter fence. An unexploded ordnance UXO exploded in an open area east of Zaitoun, east of Gaza city. One injury was reported.

On International Women’s Day: Promoting equal opportunities for women in the private sector in the Gaza Strip 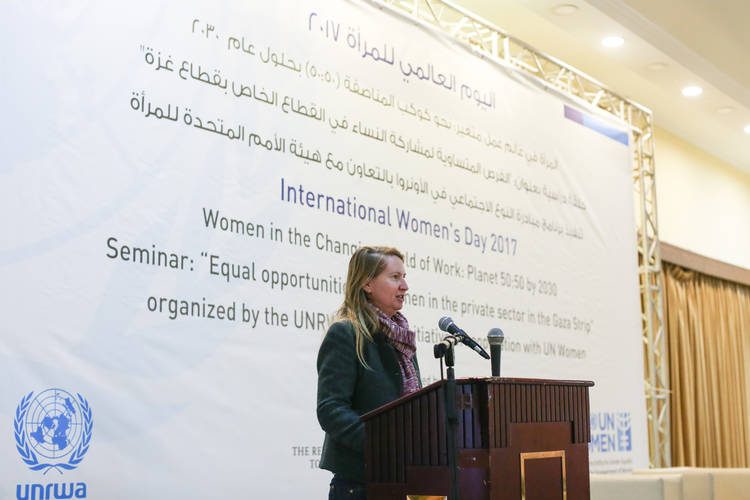 This year, the theme for International Women’s Day, which falls annually on 8 March, was ‘Women in the Changing World of Work: Planet 50:50 by 2030’ (#BeBoldforChange). On this occasion, the UNRWA Gender Initiative, in cooperation with UN Women in Gaza, organized a seminar entitled ‘equal opportunities for women in the private sector in the Gaza Strip’, targeting representatives from international and local humanitarian organizations, civil society and the Palestinian private sector. The seminar opened with remarks by the UN Coordinator for Humanitarian Aid and Development Activities in the occupied Palestinian territory, Mr. Robert Piper, as well as by Deputy Director of UNRWA Operations in Gaza, Ms. Melinda Young.

“Women's economic empowerment is about economic equality, such as increasing job opportunities, access to loans or closing the gender pay gap; and it's also about breaking down barriers that hold women back - from discriminatory laws, structural barriers, to an unfair share of home and family care,” said Ms. Young at the event.

The seminar involved an audience of approximately 150 and aimed to increase understanding of the opportunities and the current situation of gender equality in the labour market, and provide concrete recommendations and ideas to improve women’s participation and access to the private sector. The seminar included sessions on topics such as women and the Information and Communications Technology (ICT) sector and international standards for gender equality in the labour sector, presented by guest speakers from the Palestinian private sector.

“Through the seminar, we tried to encourage women to participate in the private sector by sharing other women’s success stories and by gathering representatives from the private sector and other organizations in the same room in order to exchange opinions and experience. Furthermore, we aimed to establish recommendations to support increasing women’s participation in the private sector,” said UNRWA Gender Initiative Programme Officer, Ms. Najwa Lobbad,

Each session was followed by discussions and the floor opened for questions from the audience, which included private sector representatives, university students and graduates, as well as representatives from Non-Government Organizations (NGOs) and United Nations (UN) agencies. The seminar resulted in the development of different recommendations to support and encourage women’s participation in the private sector, including orientation and training for female graduates in line with needs of the labour market, and the addition of a practical training in higher education systems.