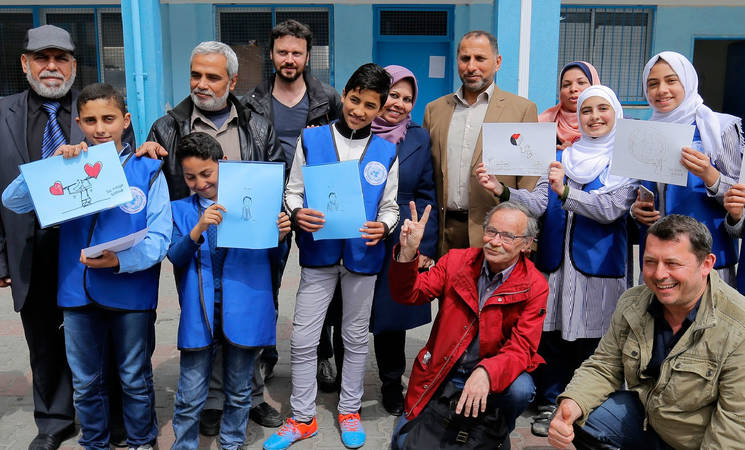 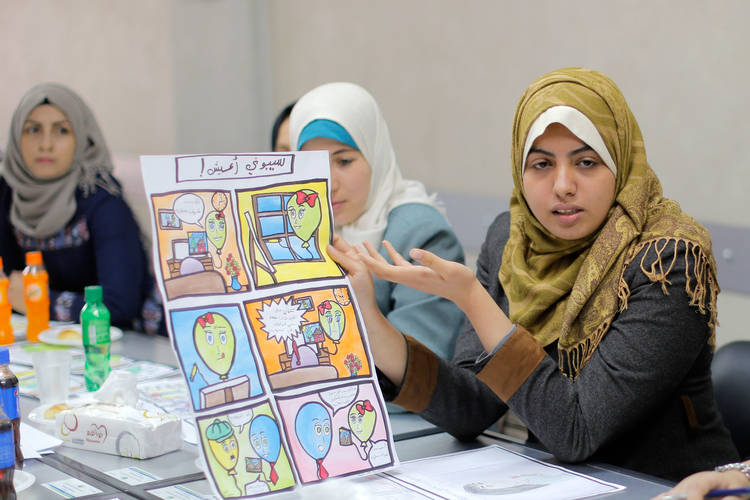 19-year-old Sarah Al Ramlawi explaining her drawings to Swiss cartoonists during a meeting in a Community-Based Organization in Gaza city. © 2017 UNRWA Photo by Rushdi Al-Sarraj

On 23 March UNRWA facilitated by the office of the Swiss Development Cooperation in Jerusalem organised a cartoon drawing workshop at Al-Khrijat, a community-based organisation in Gaza City, for young and aspiring female artists. The workshop was led by Thierry Barrigue, Nicolas Sjöstedt  and Pierre-Olivier Comment, three professional cartoonists from Switzerland.

Young artists in Gaza suffer from the limitations and restrictions imposed by the blockade. They face difficulties exchanging experiences with peers, traveling abroad for training or studies or because of their families’ concern that it is difficult to earn an income through art while the socio-economic situation is already very dire in Gaza. Yet art is an important medium to express feelings, dreams and fears. The workshop provided aspiring Gaza artists with an opportunity to learn from accomplished professionals. In turn learning about the experiences and motivations of their Gaza counterparts was a source of inspiration for the visitors.

“We are used to hearing about Palestine refugees on television, but today we meet them personally, and when we will go back to our country, we will talk to people about how you live, about your suffering, but also about your dreams and hopes,” said Thierry Barrigue, one of the Swiss cartoonists, to the Palestine refugees they met during their visit.

The workshop took place at Al-Khrijat community-based organisation and involved 20 young women from all areas of the Gaza Strip. They had previously participated in a comic drawing training organized by the UNRWA Gaza Communications Department in cooperation with Community-Based Organisations in Gaza city. The one-month training took place in February and focused on topics such as early marriage and gender-based violence. Comic drawing is a form of story-telling, through which UNRWA attempts to empower and provide participants (directly affected or others) with a platform and a voice to advocate for change and support inside their community and beyond.

“The inspiration for my drawing came from my live. I like to draw but my family prevented me from studying art in the university because they think that it is hard to find a job in the field of art in Gaza. So I drew how I felt about this. There are many sensitive topics which we cannot talk about, such as early marriage or gender-based violence. It is therefore easier to draw about it”, said 19-year-old Sarah Al-Ramlawi during the meeting with the Swiss cartoonists.

The lively exchange enabled young female talents in Gaza to discuss the meaning and messages of their art work while exchanging experiences and challenges encountered with experienced cartoonists.