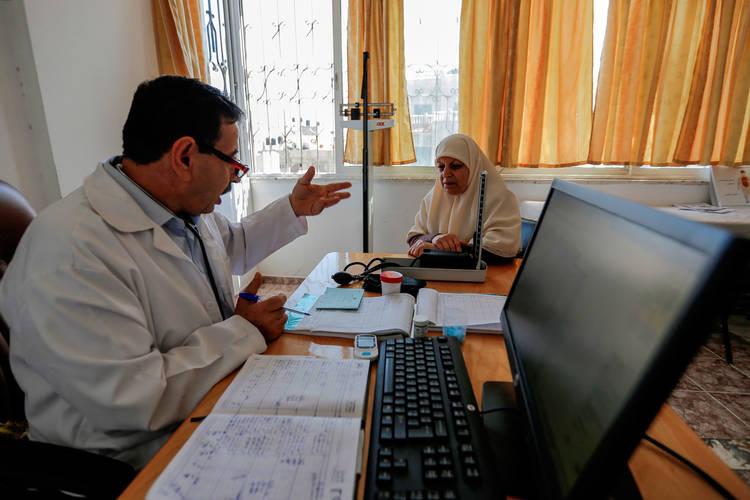 Reflecting global trends, the incidence of non-communicable diseases (NCD) such as diabetes and hypertension is on the rise in Gaza. In the coastal enclave which has been under a tight land, air and sea blockade for ten years, high diabetes rates are a direct result of the disruption to economic and social activity which allows malnutrition and infectious diseases to co-exist with non-communicable health conditions such as obesity and diabetes. Forced urbanization, over-crowding and related psycho-social stress can aggravate these diseases. UNRWA currently provides services to over 80,000 NCD patients, including over 2,400 newly registered in the first quarter of 2017.

Kamlah Nassar visits the UNRWA Beach Camp Health Centre every three months to ensure good monitoring of her health condition. During her regular visits she receives different services such as blood, diabetes and hypertension tests, in addition to participating in awareness-raising sessions organized by staff at the Beach Camp Health Centre. “I’ve chosen to follow up at the UNRWA Health Centre for many reasons: I trust the place and feel comfortable there. My medicine is always available and primary care is free of charge which is a great help for a poor person like me,” Kamlah commented.

NCD patients require routine health check-ups and consistent access to medicines. Interruptions to either or both elements of treatment for extended periods of time are likely to trigger secondary complications, such as blindness and infections, in the case of diabetes. Early detection and prevention are therefore critical to protect diabetes patients from the secondary effects of the disease.