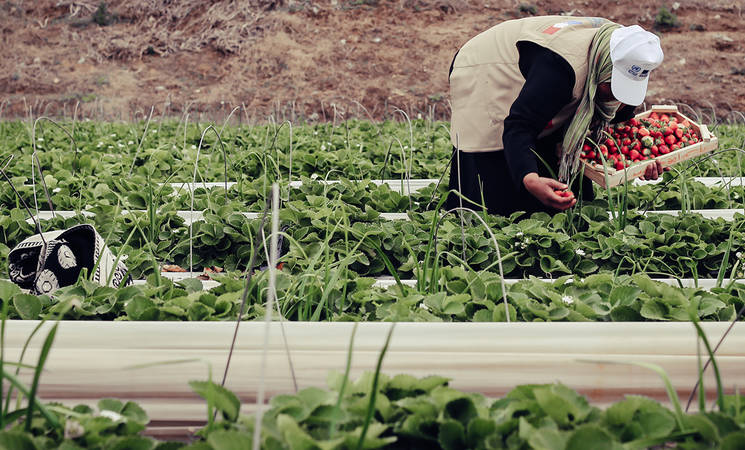 Women’s Programme Centres:
building up the confidence and self-reliance of Palestine refugee women 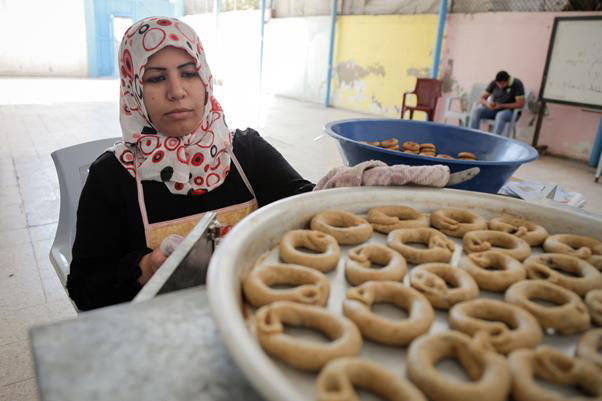 To assist in the empowerment of Palestine refugee women, facilitate the building of their networks and to strengthen their role and active participation in the community, UNRWA’s Relief and Social Services Programme contributes to seven independent Women’s Programme Centres (WPC) in the eight official refugee camps in Gaza.

Thirty-year-old Mervat Aloosh, a Palestine refugee woman who lives with her family in the Beach camp, western Gaza city, has been a regular visitor to the Beach Women’s Programme Centre for two years.

“Two years ago, my friends told me about the Women’s Programme Centre, I started by learning sewing and I enjoyed the course very much. Although I didn’t have the opportunity to complete my university studies, I took a variety of training courses through the Centre on cooking, marketing and sewing. The Centre provided me with a good opportunity to learn, build new relations and friends and become more self-confidant” Mervat said.

The Women’s Programme Centres support Palestine refugee women through cultural and recreational activities. The Centres also offers a wide range of integrated services to enhance the knowledge and capabilities of women, such as skills training and education.  These services are delivered by seven Women’s Programme Centers (WPCs) across the Gaza Strip.

“I participated in many activities organized by the Beach Women’s Programme Centre including psychological support sessions, and gender-based violence awareness sessions. The activity I liked the most was about women’s rights as I never knew before about my inheritance rights. This made me feel more comfortable and self-aware of my rights and duties in the community” Mervat added.

As many orders of “Ka’ek”- a traditional festive dessert made in Eid marking the end of Ramadan - were received through the Centre’s Facebook page, the participants, along with the Centre’s management, came up with idea of making Ka’ak and selling it for profit.

Mervat said: “Every day we prepare an average of 80 to 100 kilos, upon request. The Beach Women’s Programme Centre provides us with the place, tools and raw materials. Our work doesn’t stop after the Eid season, there are always cooking activities hosted by the Centre; we are planning to continue and sell pastries and other desserts. “The Centre’s activities enable me to provide for my family in a more stable manner, especially given my husband is unemployed,” she added.

The UNRWA Relief and Social Services Programme (RSSP) empowers Palestine refugees, focusing on the most vulnerable groups, by meeting their social and economic needs through community social interventions. RSSP activities range from the distribution of food baskets and the regular assessment of refugees’ poverty status and eligibility for services through social workers, to a variety of skills training and capacity building mainly for women, children and youth.  In total, UNRWA assists seven Women’s Programme Centres in refugee camps across the Gaza Strip. WPCs aim to empower women socially and economically, and enhance women’s participation in the community through legal advice and with skills-based trainings. The centres also try to assist illiterate women in entering the formal education system by providing education and literacy classes.

The Gaza portion of the Emergency Appeal amounts to US$ 355 million for 2017, to address protracted, large scale humanitarian needs. More information can be found here,

Longstanding restrictions on the movement of people and goods to and from Gaza have undermined the living conditions of 1.9 million Palestinians in Gaza.Israel prevents all access to and from the Gaza Strip by sea and air.Movement of people and goods in and out of Gaza is restricted to three crossings: Rafah crossing, Erez crossing and Kerem Shalom crossing. Rafah crossing is controlled by the Egyptian authorities and technically allows for the movement of a number of authorized travellers, Palestinian medical and humanitarian cases only. Erez crossing is controlled by Israeli authorities and technically allows for the movement of aid workers and limited numbers of authorized travellers, including Palestinian medical and humanitarian cases. Kerem Shalom crossing, also controlled by Israeli authorities, technically allows for the movement of authorized goods only.