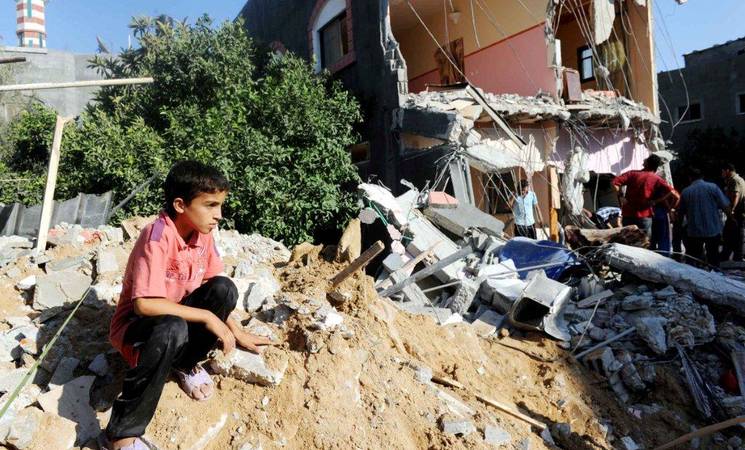 Due to the dramatic escalation in violence over the past few days and the massive assault on Gaza, UNRWA has declared an emergency in all five areas of the Gaza Strip. It is closely monitoring the situation and stands ready to mount an emergency response should that become necessary. The priority for the Agency at this time continues to be its regular operations, however urgent funding needs persist.

Background: Following the escalation in violence between Gaza and Israel in November 2012 an understanding was reached between Hamas and Israel, mediated by Egypt, which called for security for Israel to be met with improvements for Gaza. 2013 was subsequently the quietest year in a decade, in terms of violence between Israel and Gaza. Relative calm began to break down at the end of 2013, and any remnants have been shattered since the abduction and murder of three Israeli teenagers in the West Bank on 12 June, and then the murder of a Palestinian teenager from Shuafat on 2 July.
All of this sits against the backdrop of a governance vacuum in Gaza. There was hope for positive change at the announcement on 2 June 2014 of the formation of a National Consensus Government (NCG). It was expected by Gazans that the new government would bring stability to public sector salaries, that the Rafah crossing with Egypt would open for civilian travel, and that in the long run the Israeli-imposed blockade might be lifted. None of these expectations have been met.

The Israeli blockade entered its 8th year in June 2014 and continues to have a devastating effect. Exports from Gaza and people’s movement to and from the Gaza Strip remain banned, and access to fishing areas and land severely limited. The already dire economic situation was compounded in 2013 by the end of the illegal tunnel trade, which meant that low-cost products arriving from Egypt were replaced by more costly products arriving via Israel. Importantly, the private construction sector cannot import from Israel and is effectively destroyed.

As a result of political failure, the socio-economic context in Gaza is equally alarming. The economy and its capacity to create jobs has been devastated, with the majority of the population becoming increasingly poor and dependent on humanitarian aid to meet basic needs. The number of Palestine refugees coming to UNRWA for food aid has increased from less than 80,000 in 2000 to over 830,000 today. 65 per cent of the population is 24 years old or younger. Youth unemployment stands at 65 per cent.

The escalation of violence in Gaza, particularly over the past 72 hours, has been intense and the situation very much mirrors that of the first days of the November 2012 escalation, with devastating effects on Palestine refugees.

UNRWA very much fears that preparations for a ground offensive will imminently lead to large-scale displacement from areas near the fence of Israel.

Past 24 hours: There has been an alarming escalation of violence over the past 24 hours, with a heavy increase airstrikes and other fire affecting communities throughout the Gaza Strip. The reported death toll in the past 24 hours is 46 people, with 117 injured, some as a result of the apparently deliberate targeting of residences.  The United Nations has condemned indiscriminate rocket fire from Gaza on civilian areas in Israel and UNRWA condemns use of force by Israeli security forces on Gaza that cause civilian casualties in violation of international humanitarian law.

At least ten children have been killed since the escalation of conflict on Tuesday. The noise and disturbance of projectiles throughout the night, has left refugee families unable to sleep and in a state of fear for the very near future. There is no clarity on what the next days and weeks will bring. Civilian casualties are on the rise. The streets of Gaza remain virtually empty, with all banks and most shops closed.

So far only very limited displacement has taken place, and no emergency shelters have yet been opened.

UNRWA’s preparedness levels are high but history shows that the organization can expect to shelter up to 50,000 displaced Gazans in its schools if a ground invasion occurs. Yet, the organisation holds stock for less than 35,000, a legacy of scarce financial resources that did not allow UNRWA to replenish contingency supplies after the devastating flooding in December, 2013.

The current security situation is alarming and UNRWA continues to monitor the escalating situation on the ground. Gaza Field Office is in close and frequent contact with Area field teams.
Regular UNRWA services continue. 12,346 families received food assistance in Gaza over the past 24 hours, as part of the organisations’ food aid program. There are a total of 830,000 refugees dependent on UNRWA for this critical support.
As UNRWA has always done in the past, it also stands ready to provide whatever emergency assistance it can, should the situation deteriorate even further.

Reportedly, 247 raids with 387 missiles were fired by Israel to the Gaza Strip. 273 rockets and 9 mortar shells were fired towards Israel. The Israeli navy fired 186 shells at targets, and 66 houses in Gaza were bombarded by Israel. Israel Defence Forces positioned at the border fired 16 tank shells.
There were 46 deaths and 117 injuries reported. The Palestinian Ministry of Health has reported that total deaths since Tuesday, now stand at 76, with 500 injured. Reports indicate that at least ten children have been killed over this time period.

Six UNRWA schools were damaged in the reporting period –one in the North Area, three in Gaza City, and two in Rafah, southern Gaza Strip.

Approximately 10 people used an UNRWA school in Gaza City as a shelter on the evening of 9 July. In Khan Younis, 50 Palestinians used a school for shelter. UNRWA has not officially opened shelters at this stage, but some nearby residents have sought the temporary, relative security of UNRWA installations.

Although operations for UNRWA continue in all five Areas, there is an urgent need for funding to cover the $22 million Emergency Appeal shortfall already projected by the Agency. Currently, the most urgent funding needs include funding to continue the food assistance programme and additional resources to procure additional non-food items ($1 million) and fuel for critical installations ($2.5 million).

Rafah crossing was closed.
Erez was open for foreigners and humanitarian cases only.
Kerem Shalom was open.