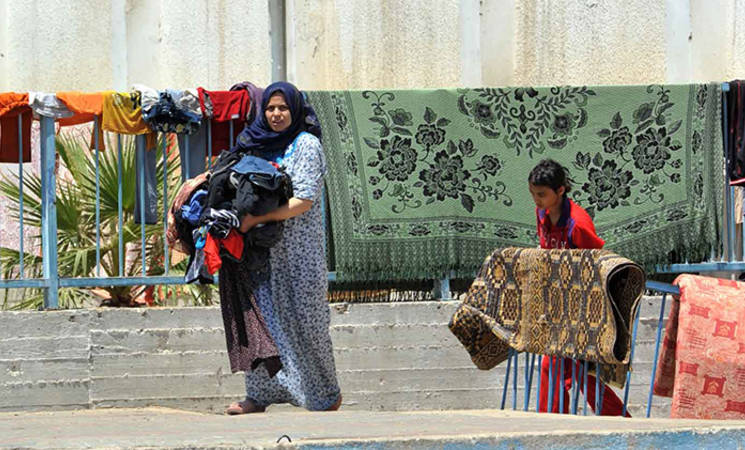 On 7 July UNRWA declared an emergency in all five areas of the Gaza Strip in response to escalating violence between Israel and Hamas. 27 July marked the twentieth day since the emergency was declared. Since then, civilian displacement and fatalities have risen sharply. The total number of Palestinian deaths reported by the Protection Cluster currently stands at 1,067 and the number of wounded, as reported by the Ministry of Health has reached 6,233. The number of displaced people taking refuge in UNRWA shelters is now more than triple the peak number from the 2008/9 conflict and is approaching 10% of the entire population of Gaza, with approximately 170,461 in 82 schools. UNRWA has launched an emergency flash appeal for US$ 115 million to respond to the urgent and pressing humanitarian needs of the people of Gaza.

Past 24 hours: This period marked the end of the holy month of Ramadan and the start of the Eid el Fitr holiday. Ramadan this year was a particularly difficult time for people in Gaza. Tragically, over 1,000 Palestinians were killed, with the figure reported by the Protection Cluster today standing at 1,067. According to preliminary data from the protection cluster, 137 Palestinians were reported during this period as killed, which includes those whose bodies were retrieved and identified during the past 24- hour period. This figure includes 6 women and 13 children. OCHA, using protection cluster data, reports that children make up 30 percent of civilian casualties.

While a ceasefire has not been officially declared, there is currently a marked reduction in hostilities, particularly since midnight on 27 July. There were a number of reports of a temporary ceasefire being negotiated throughout this period, but none was upheld. At an emergency meeting held overnight, the UN Security Council made a Presidential Statement expressing grave concern over the deterioration of the situation in Gaza and the loss of civilian lives and casualties.  In this statement, the Security Council supported calls for a humanitarian ceasefire and stressed the need for provision of humanitarian assistance to Palestinian civilian population, including through urgent additional contributions to UNRWA.

An average of 2,000 internally displaced persons (IDPs) are taking refuge in each of the 82 UNRWA shelters, schools which normally have the capacity to accommodate only 500 people, and have not been designed as living spaces. Shelters are therefore under great pressure, without adequate water sanitation and hygiene (WASH) infrastructure in place and without sufficient space. In order to maintain standards of health and hygiene in such overcrowded conditions UNRWA is sending additional supplies of cleaning products to shelters as well as putting in place plans to prevent health issues such as scabies and head lice. Further, the end of the holy month of Ramadan is expected to place increased pressure on UNRWA food and water supplies as IDPs break their fast.

If hostilities cease on a longer term basis, IDPs taking refuge in UNRWA shelters will be returning to their homes. Many will find that their homes have been totally destroyed or have sustained major damage. Many IDPs fled their homes with nothing and have lost everything in the subsequent destruction of a number of neighborhoods. UNRWA will continue to provide support to displaced refugees once rebuilding commences, including psychosocial support to deal with the trauma of loss, fear and displacement. Once IDPs return to their homes, UNRWA will also begin preparing schools, more than half of which have been serving as shelters, for the new school year. With most installations being damaged during this conflict being schools, UNRWA will need to conduct minor and major repairs of schools before the new school year starts, as well as cleaning and maintenance.

UNRWA Commissioner- General, Pierre Krähenbühl, together with other UNRWA staff members, met yesterday at UNRWA Headquarters in Amman with Queen Rania Al Abdullah. The Commissioner- General expressed gratitude to the Hashemite Kingdom of Jordan for support to the Agency and stated that the situation in Gaza “has been extreme for so many years, to the point of becoming completely unsustainable”. Her Majesty expressed concern with the impact of the conflict on civilians, stressing that there is no safe place for those seeking refuge from the violence.

Reportedly there were 45 rockets and 60 mortar shells fired towards Israel. There were also reports that 45 missiles were fired into Gaza in addition to 100 navy shells and 460 tank shells. Reportedly, 16 houses were bombarded.

An estimated 94 UNRWA installations have been damaged since 1 June, 2014, many of them on multiple occasions. UNRWA is still to verify this number when the security situation allows. No additional installations were damaged during this period.

UNRWA has launched an emergency flash appeal for US$ 115 million to provide emergency assistance to 150,000 people through its shelters- where food, NFI and psychosocial support are provided- and through health and social service facilities available to those not taking refuge in UNRWA shelters. This funding will also allow UNRWA to start early recovery activities once hostilities cease