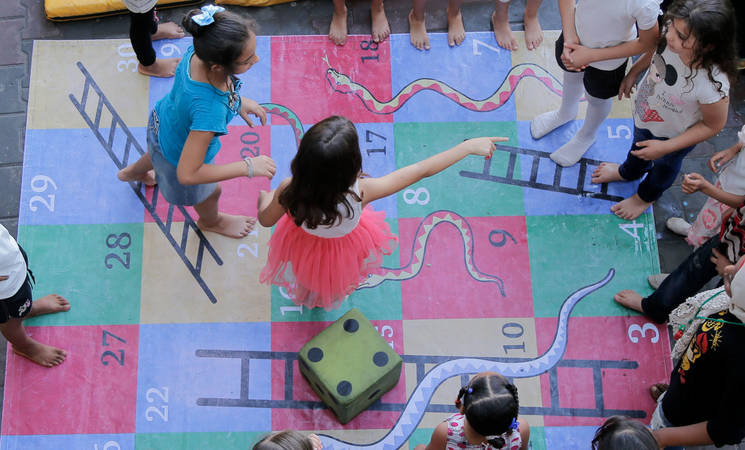 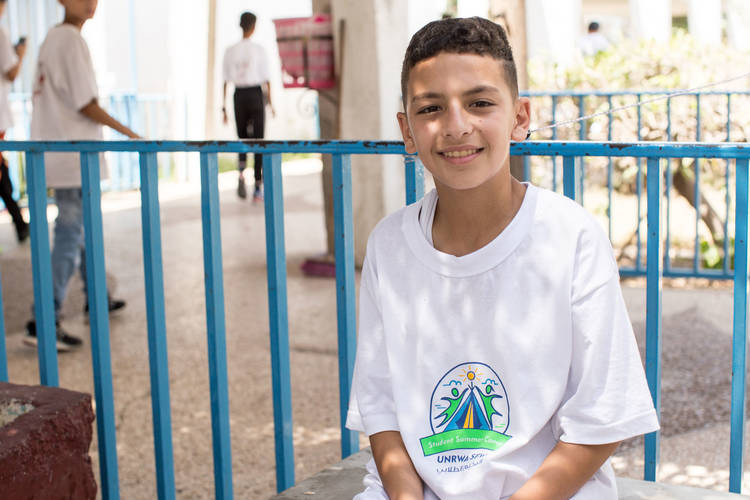 Thirteen-year-old, Ahmed Mousa, a Palestine refugee child from Ramallah, was one of the students from the West Bank who participated in a one-week summer camp with students from Gaza Strip. © 2017 UNRWA Photo by Tamer Hamam

The blockade on the Gaza Strip has entailed tight control over all aspects of life since 2007, severely restricting the movement of people, as well as goods. Ten years of closures and restrictions – as well as repeated cycles of violence – continue to negatively impact a broad range of human rights by crippling the economy, eroding coping mechanisms, and affecting the social fabric of Gaza. There has been a sharp increase in the reliance on humanitarian aid.

Practically, it also means that tens of thousands of children in Gaza and the West Bank have no opportunity to interact with their peers in other parts of the occupied Palestinian territory and do not know how they live. As part of UNRWA’s ongoing efforts to mitigate the negative effects of the blockade, UNRWA for the first time organized a one-week Student Camp in the context of the Summer Fun Weeks (SFWs) during which 38 UNRWA students from the West Bank aged 12 to 14 years accompanied by 9 supervisors joined UNRWA students in Gaza for cultural exchange, building of new friendships and sharing of personal experiences.

Thirteen-year-old Ahmed Mousa, a Palestine refugee child from Ramallah, is one of the students who participated in the one-week camp that took place from 14 to 20 July. “I used to hear about Gaza on television and the internet, but sadly I could never visit due to the restrictions on movement. When I heard about Student Camp in my school, I became excited because I was finally going to visit Gaza” Ahmed said.

The Camp includes different activities such as visits to historical sites in Gaza, joint cultural activities, football and basketball matches between the students and leadership development activities. Students also had the opportunity to simply have fun together enjoying the bouncy castles and water slides installed at the SFWs locations across the Gaza Strip. Students stayed overnight in two locations: the UNRWA Gaza Training Centre for the female students and the UNRWA Rehabilitation Centre for Visually Impaired for the male students.

“Gaza is more beautiful than I imagined. People here are kind and nice and welcomed us warmly. When I return back to Ramallah, I will tell my family, friends and neighbours about the beauty of Gaza,” Ahmed commented and added, “This week, I learned more about Gaza but also useful skills such as how to depend on myself. I’m very happy that I made new friends from Gaza who really don’t deserve to live with recurrent conflict. I worry that we might not see each other again due to the blockade.”

The SFWs are taking place from 8 to 27 July in 125 locations across the Gaza Strip, including locations suitably equipped for the participation of children with disabilities. With more than 186,000 children registered this summer, activities include a variety of sports, arts and educational activities to give the children a chance to play, learn and express themselves in a safe and secure environment and to acquire the social values of team spirit, respect and cooperation. UNRWA has also devised area-specific activities such as ‘Rethink and Recycle’ in Rafah, the ‘Expo Tech’ exhibition in Khan Younis, English SFW activities in the Middle Area, Sea Messages in Gaza Area and the ‘Equity and Equality’ initiative in north Gaza. New activities include the UNRWA School Choir and the Student Ambassador programme. The SFWs are one of the Agency’s measures to address the psychosocial impact of repeated armed conflict, blockade and dire socio-economic conditions in Gaza on children. Importantly, the SFWs create a total of 2,420 short term job opportunities for mostly young unemployed Palestine refugees through the Agency’s Job Creation Programme.