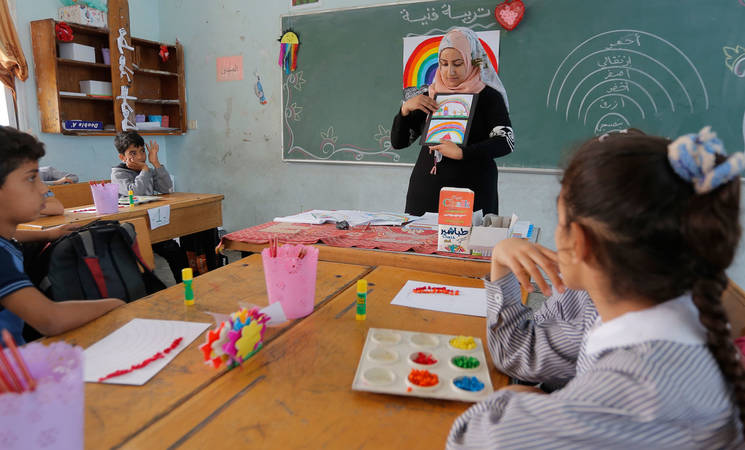 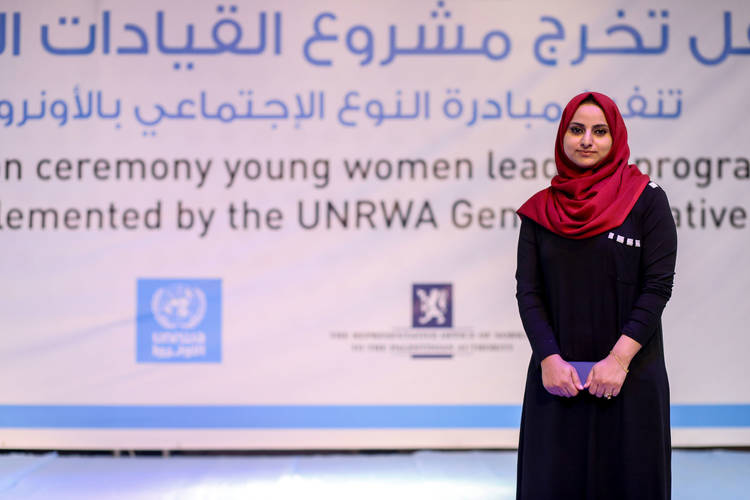 The Young Women Leaders Programme (YWLP) is implemented by the UNRWA Gender Initiative in partnership with Community-Based Organisation (CBOs) across the Gaza Strip. The programme aims at improving the skills of women graduates in management, administration, human rights, English language, IT and interview techniques. Following the training, the graduates have the chance to apply their skills through a three-month work placement opportunity across various sectors including in the private sector, non-governmental organizations and CBOs.

“The Young Women Leadership Programme was comprehensive and included a lot of valuable training. It helps fresh graduates like me to improve our chances in the labour market. Without these skills, we are unable to compete against the thousands of graduates looking for jobs in Gaza,” commented 24-year old Isra’a Shahin, holder of a bachelors degree in business administration, who joined the YWLP to complement her theoretical knowledge with practical experience in communications and life skills.

Due to the Israeli-imposed blockade and severe restrictions on the movement of people and goods, the enclave’s economy is devastated and unable to absorb the thousands of qualified graduates who enter its labour market each year. Gaza suffers from one of the highest unemployment rates worldwide. In the second quarter of 2017, the average unemployment rate stood at 44 per cent, the highest rate is recorded among female youth at 71.5 per cent, according to the Palestinian Central Bureau of Statistics. In light of these unemployment rates, the outlook for Gaza’s youth is bleak, yet the young female graduates of the YWLP are not giving up.

“Having a degree is no longer enough to get employment - it is only the first step. This training gave me skills and helped me promote myself. After finishing the three-month training, I feel like a new person. My self-esteem has increased and my involvement in and understanding of the Gaza community has changed.”  Isra’a added proudly.

Last week, 500 young women celebrated their graduation from the Gender Initiative’s “Young Women Leaders Programme (YWLP)”. The ceremony performances were developed by the graduates themselves with support from Forsan Al-Arab Association. The ceremony offered an opportunity for graduates to improve their team working skills and also to showcase self-confidence through performances such as drama, singing or speeches. The performances reflected various obstacles and challenges young women face in Gaza Strip and also focused on women’s motivation, ambitions and the strong will to promote change in their communities and create a better future for women in Gaza.

The YWLP is designed to empower and build the capacity of unemployed young female graduates between 22 to 28 years old through training and work placements. It also aims to close the skills gap between the labour market ensuring women are developing transferable skills and experience. Through leadership and self-development coaching, advanced training in computers, English and management - combined with work placement schemes - the programme enhances the employability and self-confidence of young women graduates.

“In Gaza, in a society that is male-dominated, it is especially hard for a woman to prove herself,” Isra’a said. “But I have a good attitude, energy and now support and I will achieve - for me and for my family.”

Since the launch of the YWLP in 2011, the programme has provided training to 5,051 young female graduates.  The aim of the programme is not only the professional development of young women, but also to raise their standing in the community and in their homes by helping them to gain become active participants in society.

WORLD PREMIERE: UNITED AS ONE
UNRWA concludes the first round of summer camps for refugee children in East Jerusalem
Palestine refugee youth on the path to a bright future
Baseline study of classroom practices in UNRWA elementary schools