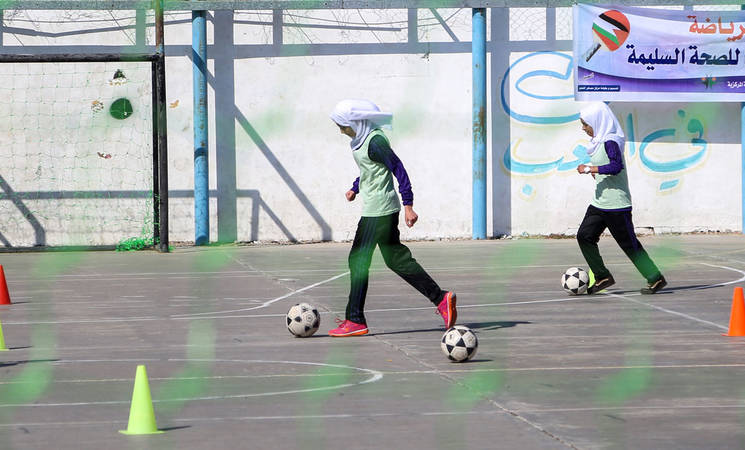 “Sports should be for everyone” 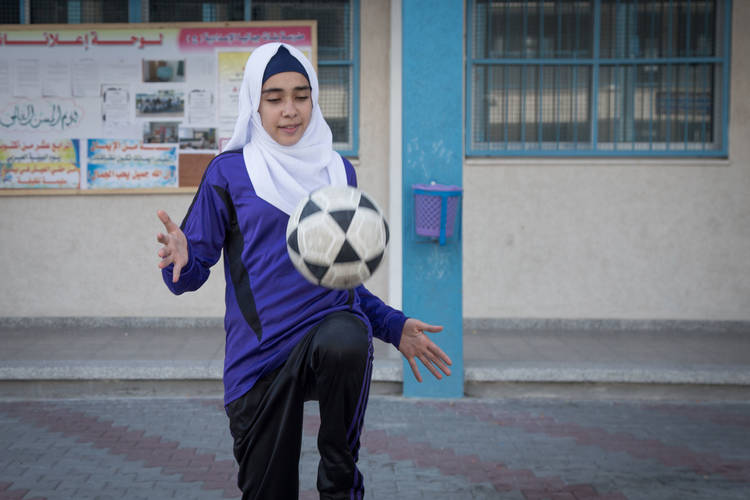 Sport is considered a high-impact tool in humanitarian, development and peace-building efforts. According to the United Nations Office on Sport for Development and Peace (UNOSDP), participating in sports enhances children’s life skills, including teamwork, working hard, showing respect, accepting losses and standing by each other, while providing them with a safe space for recreational activities and opportunities to participate in a cultural exchange and create new friendships. UNRWA Gaza promotes opportunities for physical activity in a constrained environment such as in Gaza which offers little space for children, especially girls, to exercise.

Toqa Al-Zayan, a 13-year-old Palestine refugee student in UNRWA Jabalia Preparatory Girls School C, Jabalia camp, northern Gaza Strip, is one of eleven girls on the school football team. The team has a training session on football skills once a week.

“I have loved football since I was a child; I used to watch it on television with my father. Sometimes he took me with him to the local sports club to watch a football match. I started to play football with my sisters, brother and cousins in the neighbourhood,” said Toqa.

By enabling girls to play football, UNRWA strives to break stereotypes and encourage sports activities for women and effectively empower women to take on a more self-confident and proactive role in the community.

“As I grew up, it was hard for me to play football in the street as we are living in a conservative society that doesn’t accept girls playing football, but I was lucky enough to find a secure and a safe place to practice my hobby: at school,” Toqa added.

Facing a general lack of extracurricular sports activities and a society skeptical about women engaging in sports, many girls risk losing the opportunity to play sports, but with encouragement from the UNRWA Education Programme, young girls have the chance and the space to practice different sports activities.

“I found myself in football. I became more confident, made new friends, improved my communications skills and enjoy my leisure time. Sports should be for everyone, not only boys. I feel proud that I’m part of a football team,” commented Toqa.

Over the school year, UNRWA supports different sports projects through which children can access recreational activities and get a chance to step away from the hardships of living in the small coastal enclave which has been under blockade for more than 10 years.

Also, this year, from 20 July to 9 August, for the first time, a girls’ team from Gaza joined the boys’ team for the Norway Football Cup and the Dana Cup, two international youth football tournaments in Norway and Denmark, after training for a year.