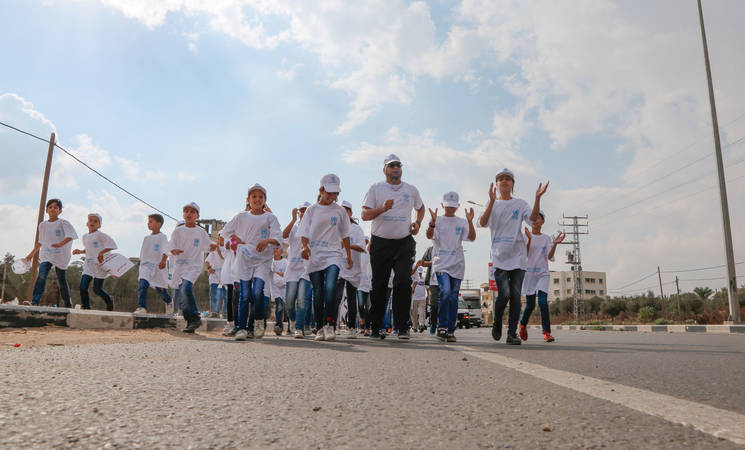 In the UNRWA Logistics Office: Hard work during and after the conflict 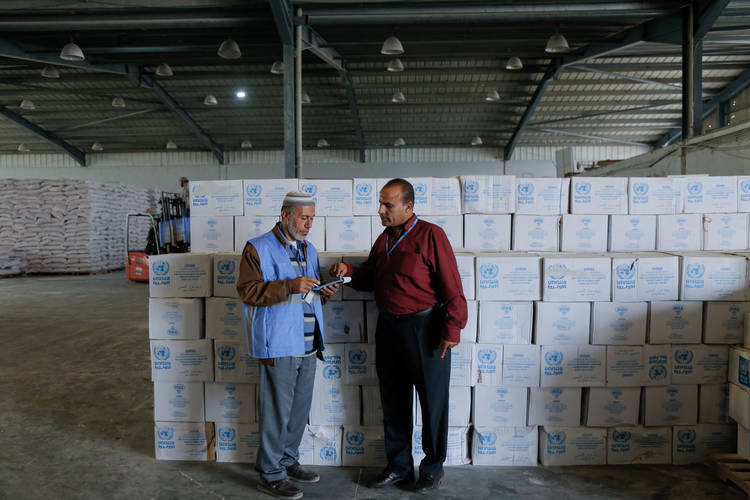 “Being a Palestine refugee myself, I am proud to work for UNRWA and to serve my community by managing the UNRWA storage of food and non-food items, facilitating transport and distribution of goods along with ensuring these goods reach their destination in good condition”, explained Jamal Al-Buri, a storekeeper who works at the UNRWA Logistics Office in Gaza.

The Karni Warehousing Industrial Zone is located inside the buffer zone - areas up to three kilometres into Gaza from the perimeter fence (44 per cent of the Gaza Strip) - close to the Karni Crossing which has been closed since 2007. The Palestinian company PIEDCO is responsible for operating the industrial zone and for renting out storage facilities for Palestinian companies and humanitarian organizations.

Goods enter Gaza through the Israeli-controlled Kerem Shalom Crossing into southern Gaza – the only official crossing open for the transfer of goods into and out of the Strip. From Kerem Shalom, UNRWA transports its humanitarian goods to two main warehousing compounds, one in Rafah, southern Gaza Strip and one at Karni which consists of 17 warehouses. After goods pass all required quality and monitoring tests, they are further distributed in coordination with end users.

To ensure high quality, the Gaza Field’s Inspection Unit conducts between four and 22 tests per month. From the warehouses, goods are then distributed to different UNRWA facilities such as its 12 Distribution Centres, 22 Health Centres and 275 schools.

Jamal Al-Buri, a 58-year-old Palestine refugee, has been working with UNRWA for the past 30 years as a head storekeeper with the Gaza Field Office’s Logistics Office. “The work in the warehouses is very sensitive as my role is to store the goods in good condition and to keep the storage principles in mind,” Jamal said.

The Gaza Field Office’s Logistics Office supports all UNRWA programmes in Gaza to provide high quality services for refugees, for example by maintaining and storing more than 120,000 tons of different supplies per year, such as food items including flour, rice, sugar, lentils, chickpeas, milk, oil and sardine and non-food items like blankets, mattresses, school books and furniture. The Logistics Office distributes about 30,000 tons of food commodities to almost one million beneficiaries on a quarterly basis in addition to NFIs for affected families.

“I worked in Karni during the last conflict. It was difficult and dangerous to go leave our home but when my supervisor called me, I immediately said ‘yes’. I would have worked even if everybody else had said ‘no’, in order to support the Internally Displaced Persons in the collective centres.  My colleagues and I worked long hours to ensure the food and non-food items reach the collectives centres,” Jamal added.

During emergencies, the UNRWA Logistics Office intensifies its efforts. At the peak of the 2014 summer conflict in Gaza,  courageous UNRWA truck drivers helped to ensure that over 290,000 internally displaced persons, sheltered in 90 UNRWA schools across the Gaza Strip, were provided with life-saving food assistance, water as well as NFIs. Additionally, the logistics team continued with the distribution of regular in-kind food commodities to more than 830,000 persons and implemented an exceptional food distribution of flour and rice to all persons who were not included in the Agency’s regular food assistance programme.

UNRWA is confronted with an increased demand for services resulting from the growth in the number of registered Palestine refugees as well as the extent of their vulnerability and deepening poverty. UNRWA is funded almost entirely by voluntary contributions and financial support has been outpaced by the growth in needs. UNRWA encourages all Member States to work collectively to exert all possible efforts to fully fund the Agency’s Programme Budget in 2017. UNRWA emergency programmes and key projects, also operating with large shortfalls, are funded through separate funding portals.

As presented in UNRWA’s 2017 Emergency Appeal for the occupied Palestinian territory (oPt), the Agency is seeking US$ 402 million to meet the minimum humanitarian needs of Palestine refugees in the oPt.