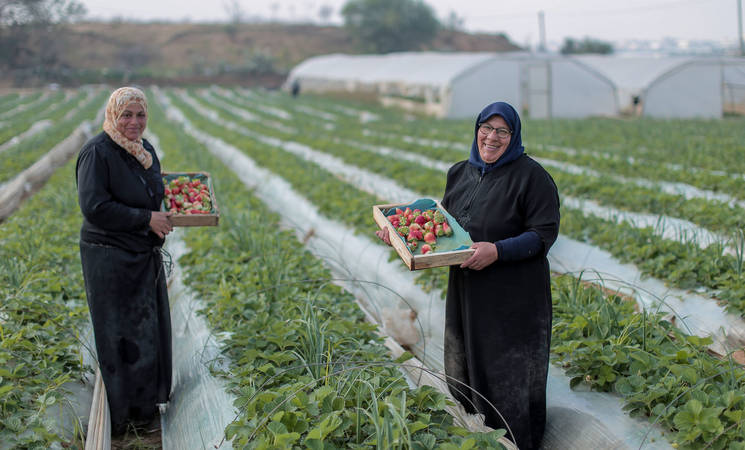 The UNRWA Job Creation Programme: providing a source of income and strengthening self-reliance 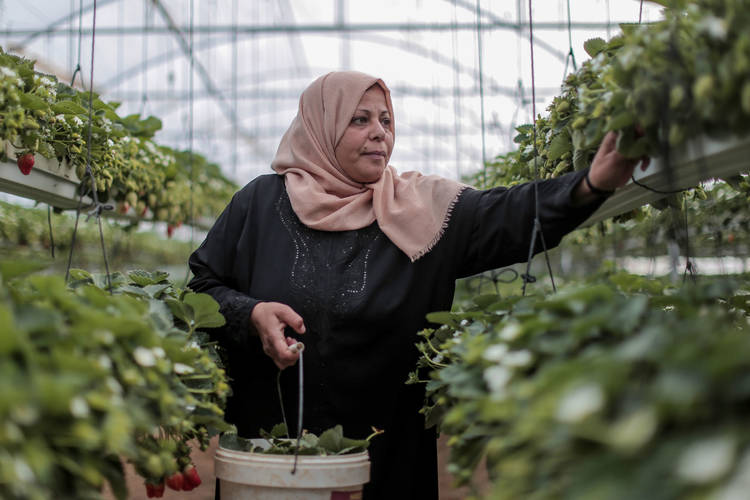 41-year-old Palestine refugee Enshirah Al-Batah, who lives with her nine-member family in Beit Lahia, works as a labourer in an agriculture project through the UNRWA Job Creation Programme. © 2017 UNRWA Photo by Rushdi Al-Saraj

The blockade of Gaza entered its 11th year in June 2017. The heavy restrictions on the movement of people and goods in and out of Gaza, in addition to the three consecutive conflicts and the internal political divide, have not only crushed the enclave’s formerly trade-based economy, they are also heavily responsible for the sky-rocketing unemployment rates. Extreme poverty, food insecurity and confinement contribute to depression and hopelessness. According to the Palestinian Bureau of Statistics, the unemployment rate in Gaza was at 46.6 per cent in the third quarter of 2017. Even more dramatically, 71 per cent of females in Gaza are reportedly unemployed.

Through the UNRWA Job Creation Programme (JCP), the Agency works to mitigate the impact of the collapsed economy and labour market in Gaza by providing livelihood opportunities for Palestine refugees.

41-year-old Palestine refugee Enshirah Al-Batah, who lives with her nine-member family in Beit Lahia, northern Gaza Strip, received a three-month work opportunity as a labourer in an agriculture project in Beit Lahia as part of UNRWA’s JCP activities.

“I applied for a position in the UNRWA Job Creation Programme seven years ago. I felt blessed and happy when UNRWA called to inform me that I got a three-month job opportunity. Every morning I go to work with my colleagues and start my work with hope and passion. We pick and package strawberries and prepare them for possible export,” Enshirah said.

The programme targets both skilled and unskilled workers as well as professionals. Priority is given to applicants from households who have been assessed as living below the poverty line of less than US$ 3.87 per person per day; other criteria are gender, age, skills, or location. UNRWA aims to provide 40 per cent of skilled opportunities to women and 40 per cent of all job opportunities to youth. UNRWA also offers thousands of opportunities for graduates from Gaza universities through its Graduate Training Programme.

“This is my first paid job ever. Due to my family’s difficult economic conditions, I received little education. I can hardly read and write so it’s not easy to find a job. At the beginning, it was hard to adapt to the new routine, but now I can’t wait until morning comes to see my friends. I feel more confident and productive,” Enshirah added.

The Job Creation Programme provides not only a source of income but also helps to restore self-respect, dignity and some form of self-reliance to thousands of Palestine refugees. The money earned through short-term job opportunities is mostly spent to cover basic needs such as medicine, fresh food, or clothes.

“I use the money I gain to repay my family debts and pay for my daughter’s college tuition. My dreams and hopes are simple. I dream of having a stable source of income,” Enshirah added.

In the first nine months of 2017, UNRWA created job opportunities for 16,515 beneficiaries, injecting US$ 12.4 million into the Gaza economy. To address high levels of youth unemployment in Gaza, a sub-component of the JCP – the Graduate Training Programme – offered 2,799 (out of the total of 16,515 jobs) opportunities to recent graduates in 2017 to date.

Following the 2014 conflict, US$ 316 million has been pledged in support of UNRWA’s emergency shelter programme, for which an estimated US$ 720 million is required. This leaves a current shortfall of US$ 404 million. UNRWA urgently appeals to donors to generously contribute to its emergency shelter programme to provide displaced Palestine refugees in Gaza with rental subsidies or cash assistance to undertake the reconstruction of their demolished homes.