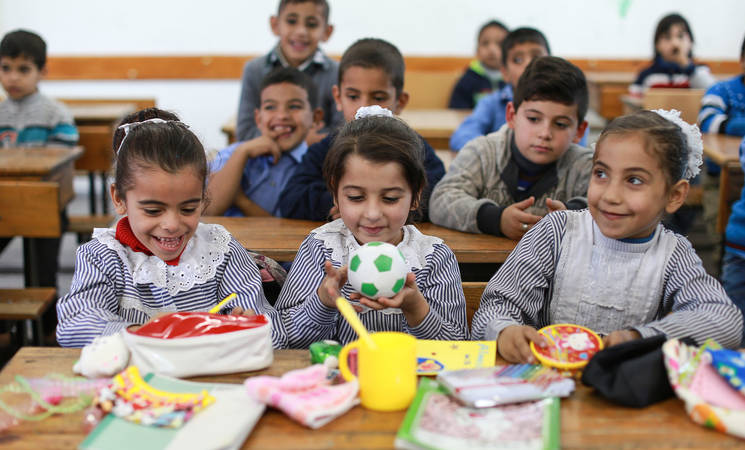 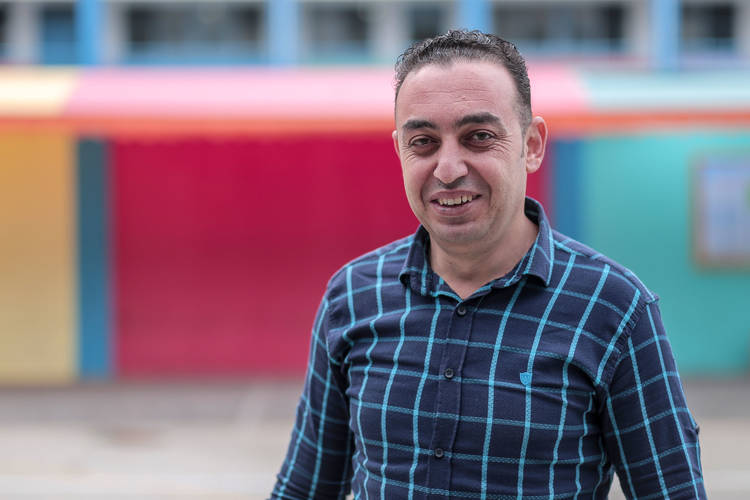 The summer 2014 hostilities had a devastating psychosocial impact on individuals and communities in Gaza, adding to the effect already felt from almost ten years of blockade and recurrent conflict. The shock of losing a home and family members and of returning to neighbourhoods to find them destroyed can contribute to eroding any sense of certainty and hope in the future. The unprecedented human, social and physical devastation during the 2014 conflict had a particular impact on children and many are still in need of psycho-social support. According to the UNRWA Community Mental Health Programme (CMHP), children exposed to violence often express a loss of trust in others. Other common symptoms are eating disorders, nightmares or intense fear.

38-year-old Mahmoud Al-Najjar has been working as a school counsellor at Beach Preparatory Boys School in eastern Gaza city for over fifteen years.“Due to the blockade and recurrent conflict, children in Gaza suffer from many psychological problems such as nightmares, aggressive behaviour, low academic achievement and social withdrawal. Through UNRWA school counselling, we provide psycho-social support to help children deal with these problems,” said Mahmoud.

CMHP counsellors play a critical role in supporting Palestine refugees of all ages. The CMHP in Gaza currently maintains a network of 274 counsellors and 82 psycho-social facilitators in UNRWA schools supported by a team of supervisors and assistant supervisors, as well as a Senior Mental Health Psycho-Social Support (MHPSS) Specialist. The programme also employs a counsellor in each of the Agency’s 22 health centres with five legal advisors working across UNRWA health centres in Gaza. They collectively support children and adults not only through individual and group counselling, but also through other structured interventions aimed at enhancing psycho-social resilience and well-being.

“Through my work, I conduct group counselling, but when the case needs in-depth intervention, I use individual counselling. In many cases, I work closely with the parents. I also use a variety of tools including drama, songs, drawing and games to help the students manage their stress and painful memories. In addition to counselling, I provide life skills sessions in time management, problem-solving, communication skills and decisions making,” added Mahmoud.

Over the past years, the CMHP has moved towards the Mental Health Psycho-Social Support (MHPSS) model to provide a more holistic and integrated approach that extends beyond counselling. Counsellors help ensure that the children of Gaza are equipped with skills to succeed in life, working closely with teachers to reinforce problem-solving, interpersonal relationships, support for their peers, respect and tolerance for others, and self-care and stress management. In UNRWA health centres, CMHP psychosocial and legal counsellors provide comprehensive support to mainly women, many of whom have experienced Gender-Based Violence (GBV), through individual counselling, group support, and relevant legal advice.

UNRWA is confronted with an increased demand for services resulting from a growth in the number of registered Palestine refugees, the extent of their vulnerability and their deepening poverty. UNRWA is funded almost entirely by voluntary contributions and financial support has been outpaced by the growth in needs. UNRWA encourages all Member States to work collectively to exert all possible efforts to fully fund the Agency’s Programme Budget in 2018. UNRWA emergency programmes and key projects, also operating with large shortfalls, are funded through separate funding portals.

Following the 2014 conflict, US$ 316 million has been pledged in support of UNRWA’s emergency shelter programme, for which an estimated US$ 720 million is required. This leaves a current shortfall of US$ 404 million. UNRWA urgently appeals to donors to generously contribute to its emergency shelter programme to provide displaced Palestine refugees in Gaza with rental subsidies or cash assistance to undertake reconstruction of their demolished homes.