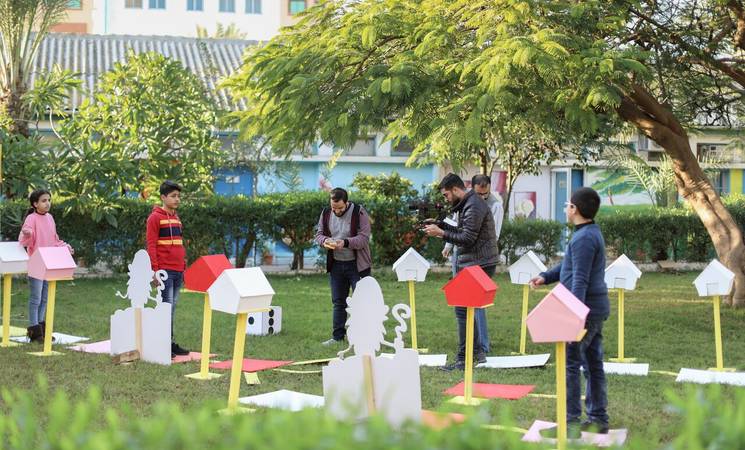 Education in Emergencies: Education for all 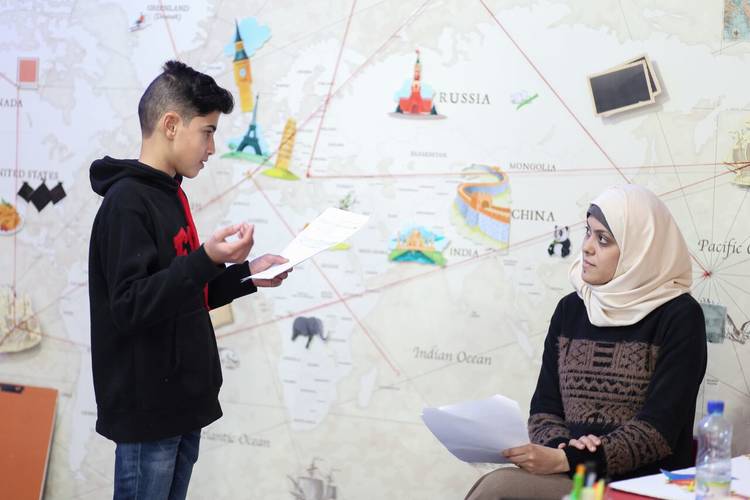 11-year old Qais Atallah, one of 16 child actors of the second educational programme season on UNRWA TV, and 33-year old Amal Hmaid, one of the producers of the UNRWA TV EiE project, discuss the script at UNRWA TV studio. ©2018 UNRWA Photo by Tamer Hamam.

Providing quality, equitable and inclusive basic education is one of the Agency’s strategic outcomes as identified in its Medium-Term Strategy 2016-2021. The Agency operates one of the largest school systems in the Middle East, teaching more than half a million children in over 700 schools across five fields of operations. In emergencies, education saves or sustains lives and is a major component of strategies for child protection. Tens of thousands of students in UNRWA’s five fields of operations are affected by conflict. As part of the Agency’s Education in Emergencies (EiE) programme, the Gaza-based UNRWA TV satellite channel allows affected children in all fields to continue their education even in crisis situations.

“Education is an essential right of all children around the world, but there are thousands of children who are unable to access their regular schools due to ongoing conflicts. Through the EiE project, we try to reach these children. For this purpose, UNRWA TV team is producing 24 new educational episodes in Arabic, Mathematics, Science and English,” said 33-year old Amal Hmaid, one of the producers of UNRWA TV EiE project.

Over the past months, the UNRWA TV multimedia team, in cooperation with the Agency’s Education Programme, wrote scripts, developed story lines and lessons, made costumes and trained children to produce the second educational season focusing on the four subjects Arabic, English, Mathematics and Science.

“We aim to develop new, non-stereotypical forms of education by using active learning strategies such as drama, music, dancing and playing to achieve memorable learning. We use peer tutoring where children explain the curriculum to each other. In addition, the produced materials will be available online so that children, parents and teachers can watch them whenever they need to,” added Amal.

The season is based on a children-teaching-children approach. During 2016, UNRWA TV developed the first season of the Education in Emergencies project.

Eleven-year-old child actor Qais Atallah said: “When I think there is a child somewhere in the world who will watch me on TV or online and learn from me, I feel proud of myself. Education should be for all. Through education, people can develop and change their future.”

UNRWA TV was established in early 2012 as a production unit and broadcaster. It broadcasts 24 hours a day, 365 days a year. Besides humanitarian communication programming, it brings innovative educational lessons to affected children in all UNRWA fields of operations. Follow the channel here.

UNRWA is confronted with an increased demand for services resulting from a growth in the number of registered Palestine refugees, the extent of their vulnerability and their deepening poverty. UNRWA is funded almost entirely by voluntary contributions and financial support has been outpaced by the growth in needs. The recent announcement by its largest donor, the United States, to drastically reduce its funding to 60 million USD in 2018 presents the Agency with a significant challenge in delivering its essential services in a predictable manner. UNRWA encourages all Member States to work collectively to exert all possible efforts to fully fund the Agency’s Programme Budget in 2018.

UNRWA emergency programmes and key projects, also operating with large shortfalls, are funded through separate funding portals. Following the 2014 conflict, US$ 316 million has been pledged in support of UNRWA’s emergency shelter programme, for which an estimated US$ 720 million is required. This leaves a current shortfall of US$ 404 million. UNRWA urgently appeals to donors to generously contribute to its emergency shelter programme to provide displaced Palestine refugees in Gaza with rental subsidies or cash assistance to undertake reconstruction of their demolished homes.