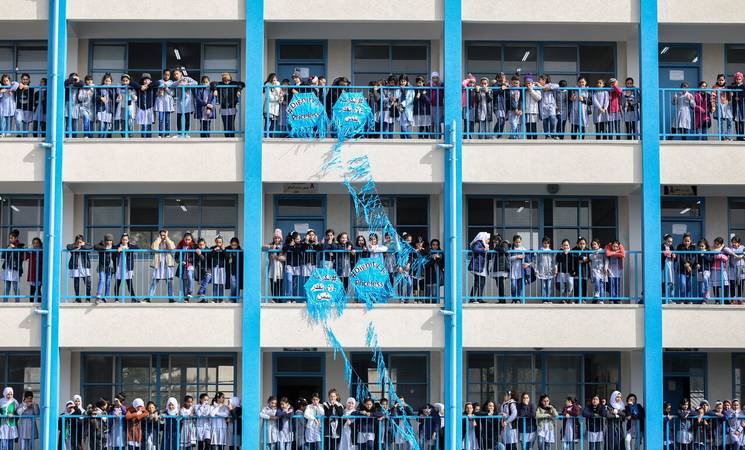 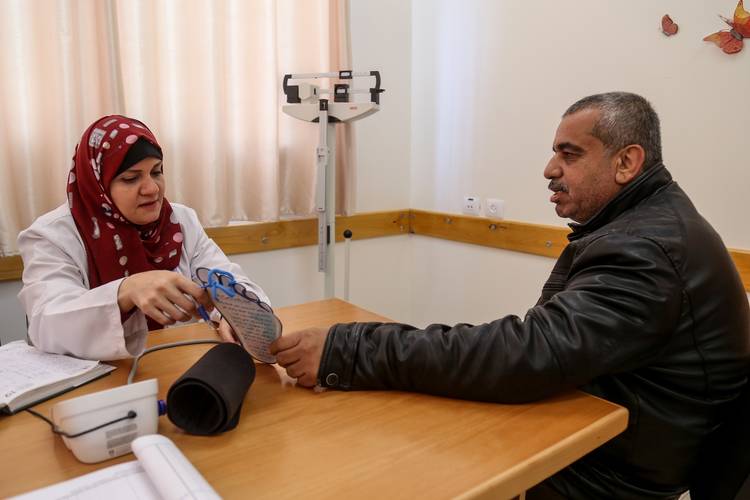 Mohammed Ali Al-Reyahi, a 57-year-old Palestine refugee and breadwinner of a nine-member family explains: “I was diagnosed with diabetes in 2002. For more than fifteen years now, I have been a regular visitor to the Beach health centre. I visit the centre every month to do my regular medical check-ups, and get my free medications.”

Reflecting global trends, the incidence of non-communicable diseases (NCD) such as diabetes and hypertension is on the rise in Gaza. A balanced diet should include all of the essential dietary components like proteins, carbohydrates, minimal fat and oil, fruits and vegetables, which is difficult to be available or secured among the refugee population in Gaza who suffer from deepening of poverty and the deteriorating socioeconomic situation. As a consequence, they mainly focus in their diet on cheap and easily available carbohydrates and oils which lead to obesity and the developing of diabetes mellitus and hypertension. Forced urbanization, over-crowding and related psycho-social stress can aggravate these diseases. There has been a continuous increase in the number of diabetic and hypertensive cases in Gaza by around 5 percent every year since 2008. While in 2008 the number of diabetic and hypertensive cases was 49,442, 84,093 cases were counted in 2017.

Mohammed visits the UNRWA Beach Camp Health Centre every month to ensure good monitoring of his health condition. During his regular visits, he receives different services such as blood, diabetes and hypertension tests, in addition to participating in awareness-raising sessions. “Last year, I attended four information sessions organized by the Beach Camp Health Centre on diabetes. I learned a lot about how to lead a healthy lifestyle, have a balanced diet and do more sports,” Mohammed commented.

NCD patients require routine health check-ups and consistent access to medicines. Interruptions to either or both elements of treatment for extended periods of time are likely to trigger secondary complications, such as blindness and infections, in the case of diabetes. Early detection and prevention are therefore critical to protect diabetes patients from the secondary effects of the disease. In 2017, UNRWA was able to expand its preventive medical services and screened a total of 103,310 individuals for diabetes and hypertension.

“Through our regular work and outreach sessions, we endeavor to provide quality health services to patients with non-communicable diseases. One of these awareness initiatives is the Micro-clinic Programme, which is designed to address increasing diabetes rates among the Palestine refugee community in Gaza. Health education and healthy lifestyle practices are key to better monitor the conditions of NCD patients and to help others either control existing conditions of prevent the onset of diabetes,” said Rehab Abed, a practical nurse at the Beach Camp Health Centre.

UNRWA is confronted with an increased demand for services resulting from a growth in the number of registered Palestine refugees, the extent of their vulnerability and their deepening poverty. UNRWA is funded almost entirely by voluntary contributions and financial support has been outpaced by the growth in needs. The recent announcement by its largest donor, the United States, to drastically reduce its funding to US$ 60 million in 2018 presents the Agency with a significant challenge in delivering its essential services in a predictable manner. UNRWA encourages all Member States to work collectively to exert all possible efforts to fully fund the Agency’s Programme Budget in 2018.

UNRWA’s emergency programmes and key projects, also operating with large shortfalls, are funded through separate funding arrangements. Prioritised needs in Gaza in relation to the 2018 oPt Emergency Appeal include US$ 80 million for the distribution of emergency food parcels to almost 1 million people, at least US$ 10 million for creating temporary cash-for-work opportunities through UNRWA’s Job Creation Programme as well as US$ 7 million for the Agency’s Community Mental Health Programme. Furthermore, following the 2014 conflict, US$ 316 million has been pledged in support of UNRWA’s emergency shelter programme, for which an estimated US$ 720 million is required. This leaves a current shortfall of US$ 404 million. UNRWA urgently appeals to donors to generously contribute to its emergency shelter programme to provide displaced Palestine refugees in Gaza with rental subsidies or cash assistance to undertake reconstruction of their demolished homes.