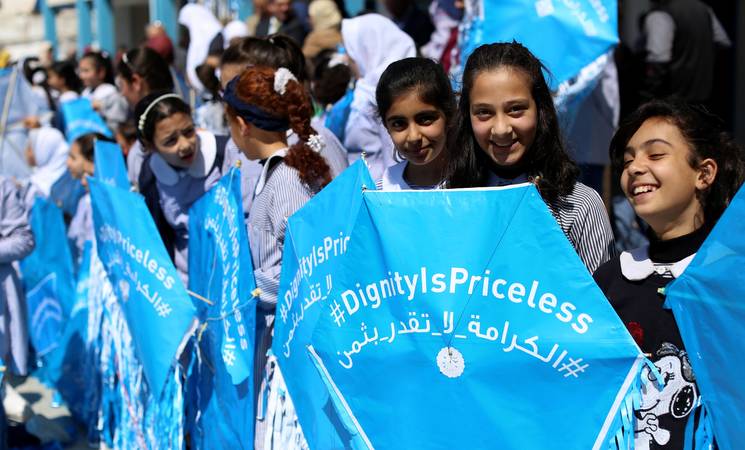 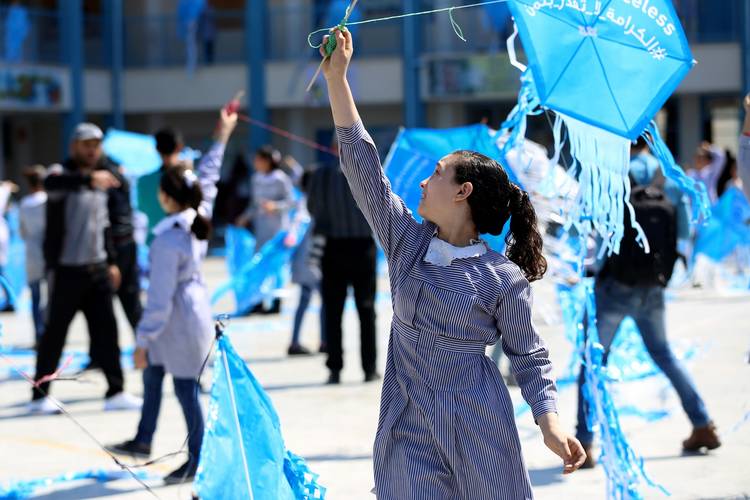 On 15 March, an extraordinary high-level conference – co-hosted by Sweden and Jordan and chaired by the UN Secretary-General - will take place in Rome to address UNRWA’s current and unprecedented funding crisis. On 12 March, in the run-up to this conference and in line with the #DignityIsPriceless Campaign, 5,300 students in 175 schools across the Gaza Strip in parallel with other UNRWA students from Lebanon, Jordan, the West Bank and Syria flew blue kites send a message to the international community that they would like their right to education to be protected.

12-year-old, Hala Hijazi, one of the 80 students participating in the event in Al-Rimal Preparatory Girls Co-ed School, said; ”Today, I join my fellow students from Jordan, Syria, Lebanon and the West Bank to remind the international community of our basic right to education and that our dignity deserves to be protected. We want to keep studying and learning.” Hala also expressed hope that “people around the world will help protect our right to go to school.” Nour Shihata, another student added: “I dream to be a doctor in the future, but how can I achieve my dream without education?”

UNRWA sees education as a major investment into the dignity and human development of Palestine refugees. Providing quality, equitable and inclusive education is one of the Agency’s strategic outcomes, as identified in the current Medium-Term Strategy 2016-2021, and directly contributes to achieving the UN Global Sustainable Development Goals, particularly the fourth goal which calls for ensuring inclusive and quality education for all and promoting lifelong learning.

UNRWA is confronted with an increased demand for services resulting from a growth in the number of registered Palestine refugees, the extent of their vulnerability and their deepening poverty. UNRWA is funded almost entirely by voluntary contributions and financial support has been outpaced by the growth in needs. The recent announcement by its largest donor, the United States, to drastically reduce its funding to US$ 60 million in 2018 presents the Agency with a significant challenge in delivering its essential services in a predictable manner. UNRWA encourages all Member States to work collectively to exert all possible efforts to fully fund the Agency’s Programme Budget in 2018.

UNRWA’s emergency programmes and key projects, also operating with large shortfalls, are funded through separate funding arrangements. Prioritised needs in Gaza in relation to the 2018 oPt Emergency Appeal include US$ 80 million for the distribution of emergency food parcels to almost 1 million people, at least US$ 10 million for creating temporary cash-for-work opportunities through UNRWA’s Job Creation Programme as well as US$ 7 million for the Agency’s Community Mental Health Programme. Furthermore, following the 2014 conflict, US$ 316 million has been pledged in support of UNRWA’s emergency shelter programme, for which an estimated US$ 720 million is required. This leaves a current shortfall of US$ 404 million. UNRWA urgently appeals to donors to generously contribute to its emergency shelter programme to provide displaced Palestine refugees in Gaza with rental subsidies or cash assistance to undertake reconstruction of their demolished homes.