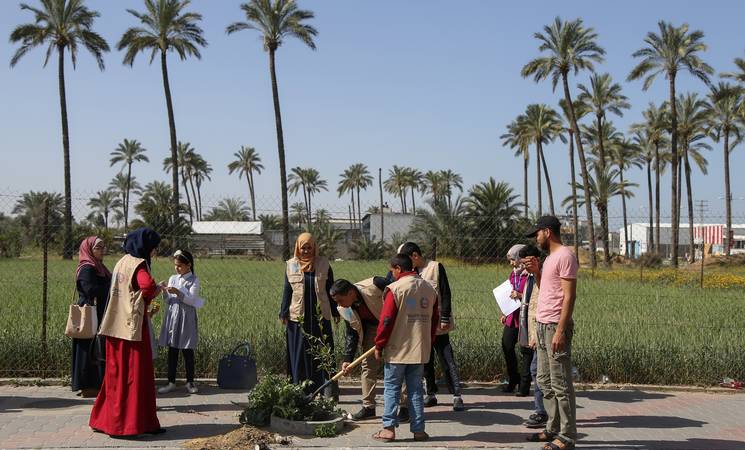 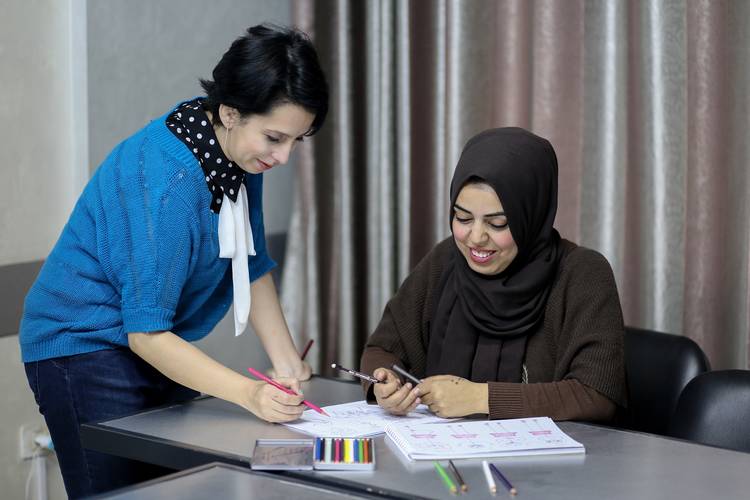 Artist Majdal Nateel (left) and Kholoud Al-Dali (right), a participant in the comic-drawing training organized by UNRWA’s Communications with Communities team at a community-based organization in Gaza City. © 2018 UNRWA Photo by Rushdi Al-Saraj.

On 1 March, the UNRWA Communications with Communities team in Gaza launched its second comic-drawing workshop in cooperation with a community-based organization in Gaza City. Approximately 25 young women are participating in the training which will last for one month and focus on topics such as early marriage and gender-based violence.

26-year-old Kholoud Al-Dali, one of the participants in the training, said: “I knew about this training from my friend who attended the same training last year. She explained to me how much she enjoyed the training and how much it helped her to express herself. The great thing about comic-drawing is that you don’t have to be a great artist to express your ideas. You only need a story and basic knowledge about drawing.”

Comic-drawing is a form of story-telling through which UNRWA attempts to empower youth to advocate for change and support within their community and beyond. After the completion of the training, UNRWA will publish the drawings on social media to make them available to a local and global audience.

The comic-drawing workshop is taught by the Gaza artist Majdal Nateel. At the end of March, each participant will have completed 14 training sessions focusing on basic drawing skills – such as how to express different emotions – and on how to write a script and tell a story by using only a few words. Through the drawings, the participants address various issues relevant to their daily lives as girls and women in Gaza, such as the importance to them of education and political participation, as well as issues pertaining to early marriage and their current and desired roles in the community. Next month, another 25 female will participate in the training.

“I find comic drawing an easy way to express myself. In a few words and with a simple drawing I manage to explain a big idea which is of importance to me. I will also recommend it to others,” Kholoud said.

Communications with Communities (CwC) is a two-way dialogue between communities and humanitarian organizations. It should enable the communities to meet their different needs, address their vulnerabilities and build on their pre-existing capacities. With the comic-drawing workshop, the UNRWA combines CwC with Communications for Development which is a social process based on dialogue using a broad range of tools and methods. Through such initiatives, UNRWA seeks to empower individual Palestine refugees and their communities and to enhance their voices through dialogue, consultation and participation.