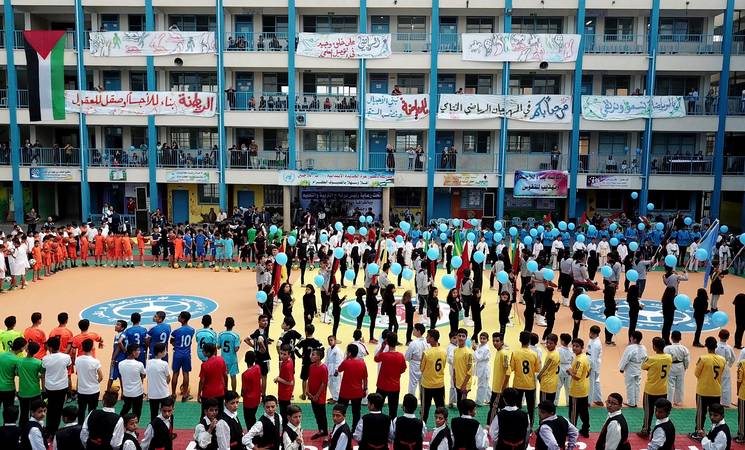 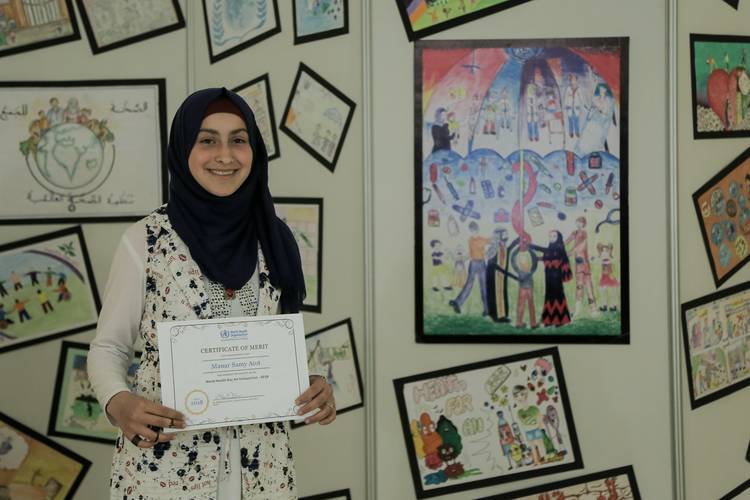 Manar Sami Atot, a 14-year-old UNRWA student, holding her certificate of merit next to her winning artwork at the final ceremony of the WHO art competition held on 10 April at Rashad Al Shawwa centre, Gaza city. © 2018 UNRWA Photo by Khaled Tuaima

Once again, UNRWA students in Gaza stand out and set an example of dedication and love of life despite the difficult circumstances they live in. On 10 April, Manar Sami Atot, a 14-year-old UNRWA student at Rafah Preparatory Girls School “D”, won the fourth prize in the regional World Health Organization (WHO) art competition organized to mark World Health Day.

Under the slogan “Health for All”, UNRWA preparatory school students from across the Gaza Strip were encouraged to participate in the WHO art competition from 10 January to 4 March. UNRWA submitted 60 drawings by students from Gaza to the WHO Regional Office in Egypt where a panel of judges selected the winning drawings.

“I could not have been happier when WHO called to tell me that I had won the fourth prize at the level of the Middle East and the first prize in Palestine. Through my drawing, I highlighted everyone’s right to health services. Without the health services provided by UNRWA, Palestine refugees in Gaza would suffer, especially given the financial and economic hardship they face every day,” commented Manar Sami Atot.

On the occasion of World Health Day, UNRWA conducted eight awareness-raising sessions across the Gaza Strip on the topics of non-communicable diseases as well as dental, post-natal and maternal health. In addition, all UNRWA schools organized a series of events aimed at encouraging healthy life style habits, hygiene skills and a balanced diet during the month of April.

Throughout the year, school health teams and committees work to raise students’ and parents’ awareness of health issues and refer students to UNRWA Health Programme teams for comprehensive medical screening. Through 22 health centres, UNRWA in Gaza provides primary health care services to the majority of Palestine refugees in the Gaza Strip, including clinical and laboratory services, maternal health and family planning advice, as well as monitoring and treatment of communicable diseases such as diarrhea, meningitis and mumps. Approximately one million patients are treated on a quarterly basis.