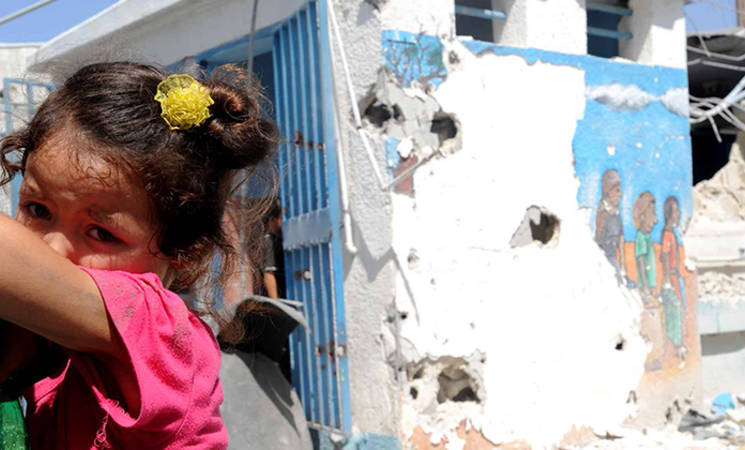 Past 24 hours:Last evening, it was reported the Israel Defense Forces (IDF) would shortly announce all tunnels from Gaza into Israel were demolished or otherwise disabled. After the mission of tunnel destruction accomplished, reportedly the IDF intends to withdraw troops from built-up areas to the fence within Gaza. Some troops will completely withdraw. Later last night, Prime Minister Netanyahu said after all tunnels inside the Gaza Strip were destroyed, the IDF would continue to restore the security of Israel, noting that all options were on the table. In the meantime, Gazans were informed by the IDF they can return to their homes in the Northwest. There are conflicting messages with regards to the actual withdrawal of IDF troops inside Gaza, and the actual frontline. UNRWA received reports that some displaced tried to visit their homes to gather personal items and return to the shelter, but turned back when they heard of shelling in the North.

In the fourth week of the current escalation, UNRWA staff continue to work round the clock to help those in need under the most difficult circumstances in a deteriorating security environment. With nine staff members killed as a result of the conflict, Robert Turner, Director of UNRWA Operations in Gaza, said: “The loss of these nine people is a tragedy that cannot be forgotten. They faced all the challenges affecting Gaza and yet remained determined to support people in desperate circumstances. In the truest sense of the word, they were humanitarians, and their loss is a terrible blow to their families, to Gaza and to UNRWA.” UNRWA mourns the killing of Fatma A. Rahim Abu Amouna, 54, a teacher; Inas Shaban Derbas, 30, a teacher; Mohammed A. Raouf Al-Dadda, 39, a teacher; Ismail A. Qader El-Kujk, 53, an environmental-health worker; Farid Mohamed Mohamed Ahmed, 50, a teacher; Ahmed Mohamed Mohamed Ahmed, 51, a school principal; Munir Ibrahim El Hajjar, a teacher; Medhat Ahmed Al Amoudi, 53, a labourer, and Abdallah Naser Khalil Fahajan, 21, a school attendant.

In a statement yesterday, James Rawley, the Humanitarian Coordinator in the occupied Palestinian territory (oPt), together with Robert Turner, UNRWA’s Director of Operations in the Gaza Strip, and Dr. Ambrogio Manenti, acting Head of Office of WHO’s operations in the West Bank and Gaza Strip, expressed grave concern regarding the lack of protection for medical staff and facilities, and the deteriorating access to emergency health services for Palestinians in the Gaza Strip. One third of the hospitals are damaged. The Najjar Hospital in Rafah was evacuated and is closed.

According to UN information, 1,650 Gazans were killed to date. This figure has risen by 188 compared to that reported in the previous report (115 men, 29 women, 44 children). Almost half of all reported killings are from Rafah (87). Many bodies could not yet be recovered or identified. According to the Ministry of Health, the number of wounded has reached 9,320. According to OCHA information, 65 Israelis have been killed during the current escalation, of which 63 were soldiers, two civilians and one foreign national.

Reportedly, there were 50 rockets and 122 mortar shells fired towards Israel. There were also reports that 131 air-to-ground missiles were fired into Gaza in addition to 10 navy shells. 215 tank shells were fired from the border area in to populated areas. Reportedly, 65 houses were bombarded..

UNRWA has launched the second revision of its emergency flash appeal. The Agency now requires a total of US$ 187.6 million in order to provide emergency assistance for a revised scenario of up to 250,000 people displaced for a period of up to eight weeks.