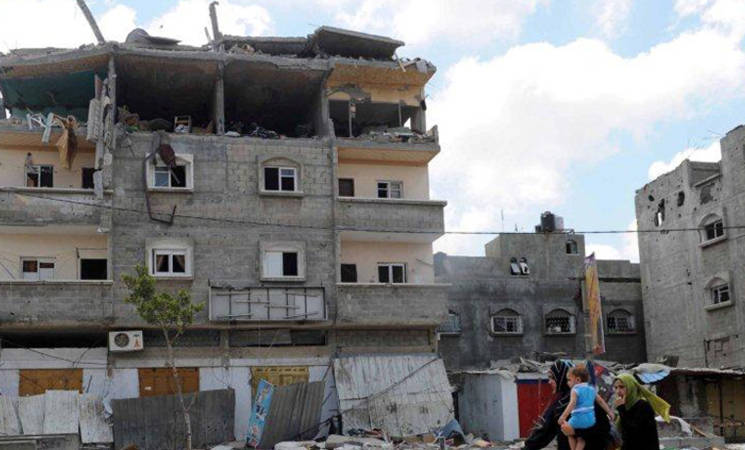 Past 24 hours: UNRWA strongly condemns the Israeli missile strike next to the UNRWA Preparatory Boys School A in Rafah at 10:45hrs on 3 August, killing nine people, including five children who took refuge in the UN school. According to UNRWA information, the killed children were between 3 and 15 years old. The strike also killed an UNRWA guard who signed his contract with the Agency four days ago, and a volunteer helping those in need. The Israel Defense Forces (IDF) were notified on 33 separate occasions that this UN school is sheltering the displaced, the last time only one hour before the incident. Almost three thousand people were registered at the school.

UN Secretary-General Ban Ki-moon condemned the deadly attack on the UN school: “The attack is yet another gross violation of international humanitarian law, which clearly requires protection by both parties of Palestinian civilians, UN staff and UN premises, among other civilian facilities. United Nations shelters must be safe zones not combat zones. The Israel Defence Forces have been repeatedly informed of the location of these sites. This attack, along with other breaches of international law, must be swiftly investigated and those responsible held accountable. It is a moral outrage and a criminal act.”

In a press statement, U.S. State Department spokesperson Jen Psaki said the United States were “appalled” by the “disgraceful shelling” outside an UNRWA school in Rafah, noting that “the suspicion that militants are operating nearby does not justify strikes that put at risk the lives of so many innocent civilians”.

UNRWA preliminary investigations indicate that the following UNRWA emergency shelters – all of which are UN Premises protected under the Convention on the Privileges and Immunities of the United Nations – were subject to six direct kinetic attacks by the Israel Defense Forces (IDF). The coordinates and joint coordination map references were communicated to the IDF on multiple occasions.

In addition to direct hits by the IDF, there have been multiple incidents of collateral damage to UNRWA installations. The appalling incident in Rafah yesterday is the first time a strike in the immediate vicinity of one of UNRWA premises caused fatalities. UNRWA estimates that 95 installations have been damaged since 8 July in 135 strikes, including at least 10 direct hits. As UNRWA installations in the three kilometer buffer zone and some installations outside the buffer zone are mostly not accessible to the Agency, these data are based on preliminary information and subject to change based on further verification.

Last night, the IDF announced a humanitarian pause within Gaza except in the areas of Shejaiya (Gaza) and Rafah (South) starting as of 10:00hrs on 4 August. The Israeli government also announced over the past few days the IDF would pull back its troops to the fence surrounding Gaza now that it has almost completed its operation in dismantling tunnels. The IDF may have withdrawn from previous reported locations, but remain within the three kilometer buffer zone inside Gaza.

The number of killed Palestinians surged to 1,777. This figure has risen by 127 compared to that reported in the previous report. According to information from the Protection Cluster, almost half of the new fatalities are from the South. According to the Ministry of Health, the number of wounded has reached 9,370.

Reportedly, there were 64 rockets and 82 mortar shells fired towards Israel. There were also reports that 99 air-to-ground missiles were fired into Gaza in addition to 17 navy shells. 230 tank shells were fired from the border area into populated areas. Reportedly, 35 houses were bombarded.

UNRWA has launched the second revision of its emergency flash appeal. The Agency now requires a total of US$ 187.6 million in order to provide emergency assistance for a revised scenario of up to 250,000 people displaced for a period of up to eight weeks.

More information on the revised appeal can be found here.