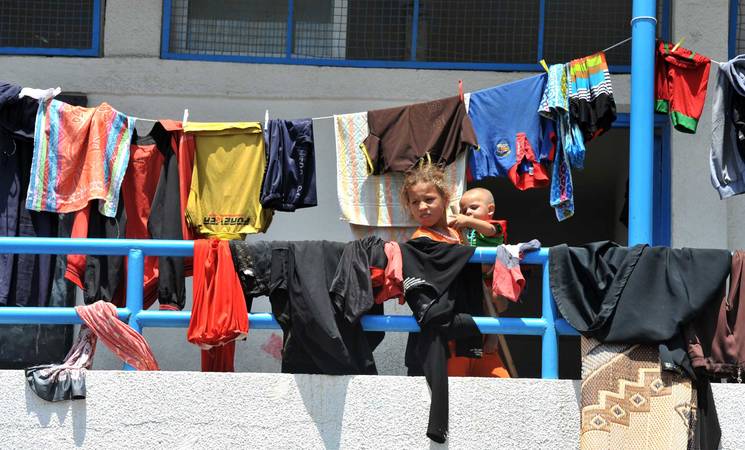 Past 24 hours: The 72-hours ceasefire is holding. The IDF withdrew from the Gaza Strip and declared an up to 500 meter-wide ‘no go zone’ on the Gaza side of the border. An Israeli delegation and a Palestinian delegation, including members of Hamas and Islamic Jihad, are currently in Cairo to negotiate a permanent agreement. In an interview with the BBC, US Secretary of State John Kerry was asked whether he supported Palestinian demands for a lifting of Israel's blockade on Gaza. He said: "What we want to do is support the Palestinians in their desire to improve their lives and to get food in and to open crossings and to reconstruct and have greater freedom." This, he said, had to come "with a greater responsibility towards Israel, which means giving up rockets".

In less than one month of military conflict, UNRWA lost eleven colleagues in Gaza. Starting on Wednesday 6 August and until Saturday 9 August, flags on all UNRWA buildings will be flown at half-mast to honor these colleagues. The UNRWA staff members are: Fatma A. Rahim Abu Amouna, 54, a teacher; Inas Shaban Derbas, 30, a teacher; Mohammed A. Raouf Al-Dadda, 39, a teacher; Ismail A. Qader El-Kujk, 53, an environmental-health worker; Farid Mohamed Mohamed Ahmed, 50, a teacher; Ahmed Mohamed Mohamed Ahmed, 51, a school principal; Munir Ibrahim El Hajjar, a social worker; Medhat Ahmed Al Amoudi, 53, a labourer, and Abdallah Naser Khalil Fahajan, 21, a school attendant. Two UNRWA contractors employed under the Agency’s Job Creation Programme have been killed while on duty in UNRWA’s shelters: Adel Mohammad Abu Qamar, a guard, and Hazim Abdelbasit Abu Hellal, a guard.

Like all Palestinians in Gaza, UNRWA staff have lost family members and friends, have their homes destroyed or shelter the displaced. One of UNRWA’s staff members in Rafah lost his two children, twelve and five years old, shortly after a previous temporary ceasefire expired. The family was displaced, but the children insisted on returning home to feed their doves and were killed in an airstrike. Despite all the personal losses, with the temporary ceasefire holding, UNRWA staff continue to work round the clock to resume full core operations and continue ongoing emergency operations.

The United Nations Mine Action Service (UNMAS) assessed four schools yesterday in Gaza City for unexploded ordnance (UXO). The schools were damaged during the shelling of the neighboring police station. Priority will be given to UXO clearance of UNRWA installations in the former three kilometer buffer zone, including schools, health clinics, distribution centers and relief, microfinance, maintenance and sanitation offices, so that these facilities can be opened again.

The number of Palestinians killed stands at 1,843, with 29 new fatalities reported by the Protection Cluster. Among the new reported fatalities, there are four boys, four girls and three women. 85 per cent of Palestinian fatalities are believed to be civilians (excluding those whose bodies could not be identified or their status is undetermined). The Ministry of Health reports that 9,567 were injured. During the conflict, 67 Israelis were killed, including 64 soldiers, two civilians and one foreign national.

Reportedly, before the start of the temporary ceasefire at 0800hrs, there were 20 rockets fired towards Israel. There were also reports that 15 air-to-ground missiles were fired into Gaza in addition to 5 navy shells. 8 tank shells were fired from the border area into populated areas. Reportedly, no houses were bombarded.

Two days after its release on 31 July, the planning scenario of the revised UNRWA flash appeal had already been overtaken by events on the ground. In its second revision, the Agency asks for a total of US$ 187.6 million in order to provide emergency assistance for 250,000 people displaced.
More information on the revised appeal can be found here.