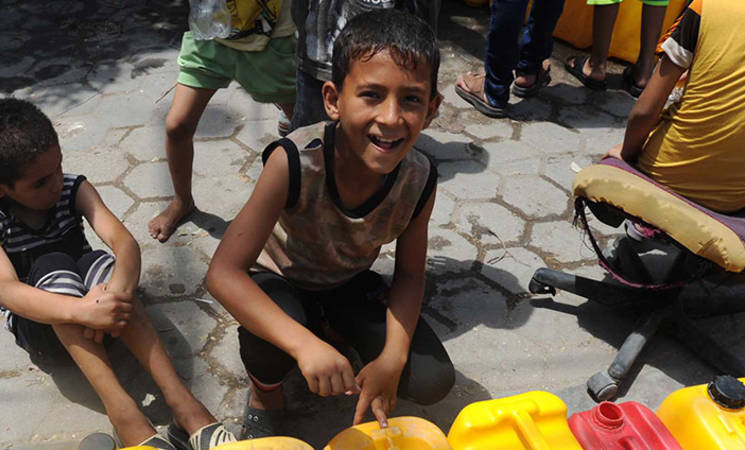 Past 24 hours: Secretary-General Ban Ki-moon welcomed the announcement of a 72 hours ceasefire and urged all concerned to avoid steps that would lead to a resumption of violence. He expressed “his strong hope that this will give the two sides, under Egyptian auspices, another chance to agree on a durable ceasefire for the benefit of all civilian populations and as a starting point to address the underlying grievances on both sides,” according to a statement from his spokesperson. He added that the United Nations stands ready to assist in the implementation of an agreement that would consolidate peace and allow for much-needed reconstruction and development of Gaza.

With the economy effectively destroyed through the blockade, the number of Palestine refugees coming to UNRWA for food aid has increased from less than 80,000 in 2000 to over 830,000 today. Throughout the current military escalation, staff safety, closure of distribution centers and lack of access to UNRWA warehouses present a daily challenge to the Agency. Since the beginning of hostilities, UNRWA staff continued food aid distribution 6 days a week, with the 7th day required to stock up food supplies stored in UNRWA warehouses.

Riyad El-Lulu is responsible for UNRWA’s food distribution center in Nuseirat, one of the Agency’s 12 centers in the Gaza Strip. His staff work some 14 hours per day, surrounded by incessant shelling, sometimes in the immediate neighborhood. “I had to leave my home in Bureij and move to Nuseirat so that I can come to work at the center here”, he says. “It is our duty as UNRWA staff and as Palestinians to support our people with assistance they desperately need during these difficult times.”

Normally, UNRWA food distributions follow a strict distribution schedule. Every family has to come at certain dates to a designated center. Since the start of the escalation, families could come any day they managed to leave their homes or temporary shelter. Some fled their dwellings without the ration cards, which are required to receive UNRWA food aid, or documents were left behind or destroyed. UNRWA staff tried hard to find solutions to help all families, including through other means of identity proof such as a driving license or information provided by the municipality. Riyad El-Lulu says: “This is the least we could do. Many of the families who come to our center lost loved ones during the conflict, and had to risk their lives to get here to receive their food assistance.”

Yesterday, across the Gaza Strip, some 2,838 families received their food rations, including oil, canned meat, rice, sugar and flour, through 12 distribution centers.

Food commodities are procured through international tenders and imported through the only functional border crossing with Israel, Kerem Shalom, and stored in UNRWA warehouses across the Gaza Strip. The food aid distribution to a total caseload of 830,000 Palestinians comes in addition to UNRWA and WFP providing daily food rations to Palestinians sheltered in UNRWA and government schools, and to the exceptional food distribution starting today 11 August.

Of UNRWA’s Infrastructure and Camp Improvement Department, 287 staff, representing 85 per cent of the permanent sanitation staff, reported to work. Together with 380 Palestinians employed under the Job Creation Programme (JCP), they removed a total of 326 tonnes of waste from all Gaza camps. UNRWA maintenance staff continue to undertake critical repair work in UNRWA installations.

Reportedly, and before the 72 hour ceasefire came into effect at midnight, there were 55 rockets fired towards Israel. There were also reports that 66 air-to-ground missiles were fired into Gaza in addition to 67 tank shells. 16 houses were reportedly bombarded by the IDF.

UNRWA estimates that 97 installations have been damaged since 8 July 2014. Data on damage to UNRWA installations is based on preliminary information and subject to change based on further verification.