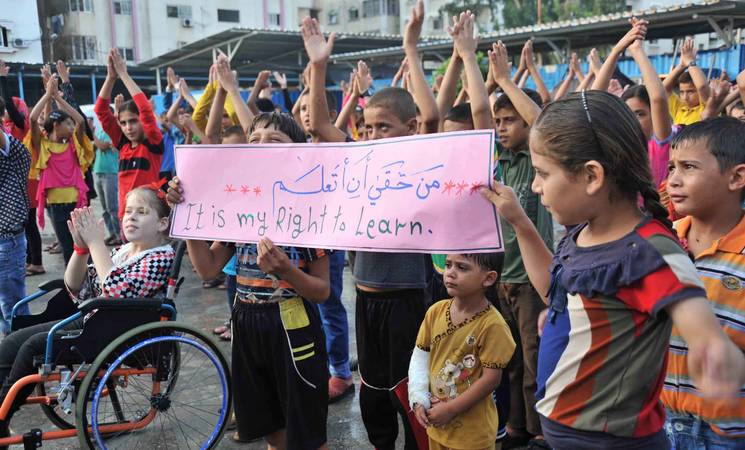 Past 24 hours: One UNRWA school in Deir el Balah, which serves as a shelter, was previously damaged during the war and sustained additional damages last night. Two out of twelve distribution centers were closed due to the military escalation which continues to impede humanitarian operations.

It is early on Sunday morning and the sound of school bells can be heard. Playgrounds are full. Students are in lines singing the Palestinian national anthem. Teachers are supervising activities. Speeches are being delivered. This however, is not a typical school assembly, falling on day 48 of a war that has seen unprecedented loss of life and devastation across the Gaza Strip.

Similar ceremonies were coordinated on 24 August in every UNRWA school functioning as a shelter, to mark what should have been the first day of school for children in Gaza. As the war continues and the current situation poses many challenges, UNRWA hopes that the symbolic ceremony offers the people of Gaza hope.

Bisan will commence the 8th grade this year. She has been taking refuge with her family in Beach Elementary Co-ed School C for the past 37 days and participated in the ceremony held there. “We will smile despite the destruction, displacement and homelessness we are passing through,” said Bisan. “The world’s students are now preparing their school bags following a happy summer vacation, celebrating the new school year and meeting their friends, but we Gaza children are not.”

The reality of the situation for children in Gaza compared to that of those in other countries also does not go unnoticed by Bisan and her classmates. “I hope that we can lead a normal life similar to other children in the world and can go to our schools in safety and security; we did not do anything wrong and on this day we should have been sitting at school desks.”

In line with the Convention on the Rights of the Child, UNRWA is committed to ensuring that it does everything possible to help all children in Gaza have access to an education. Alternative teaching and curriculum also provide for the opportunity to help children learn about maintaining their health and personal safety, including how to avoid unexploded ordnances. These interventions are also critical to families feeling safer when it comes time to rebuilding their lives.

The Agency has introduced a three phase emergency education plan, coordinated with UNRWA headquarters, the Ministry of Education and in close collaboration with other partners. The plan commences this week and includes psychosocial interventions, the use of new technology, UNRWA’s satellite TV education programs and self-learning material for all children.

Reportedly, there were 75 rockets and 81 mortar shells fired towards Israel. There were also reports that 168 air-to-ground missiles were fired into Gaza in addition to 35 navy shells. 168 tank shells were fired from the fence into populated areas. Reportedly, 33 houses were bombarded.

Data on damage to UNRWA installations is based on preliminary information and subject to change based on further verification. UNRWA estimates that 109 installations have been damaged since 8 July 2014.